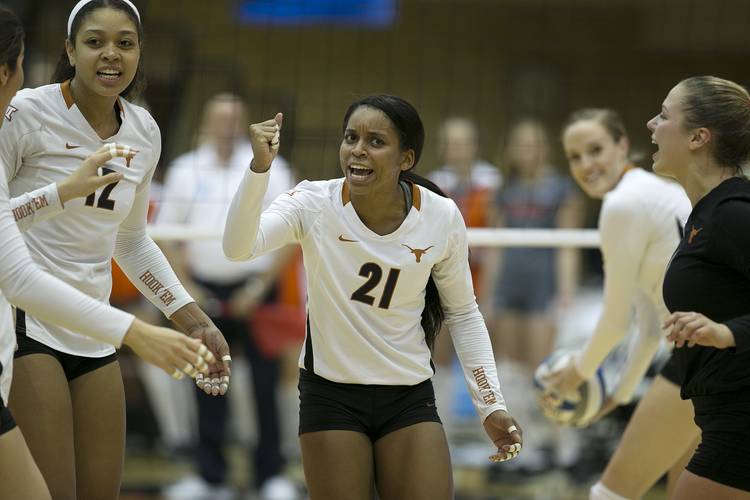 The victory Saturday night over Creighton appeared breezy and effortless, with the win pushing the Texas volleyball team to its fifth straight appearance in the Final Four.

On Monday, as the Longhorns took a day off from practice to concentrate on finals, what everyone continued to rave about was UT’s dramatic victory over BYU in the regional semifinals. It featured all sorts of quirky momentum swings, from the Longhorns taking a 2-0 set lead in the match before losing two straight sets. Texas then needed to rally from a six-point deficit in the pivotal fifth set while surging to a 16-14 win.

The Texas offense was diverse, with points coming from the left and right side and from emphatic blocks in the middle. Four players registered double-digit kills. And it was all keyed by senior setter Chloe Collins. If the Longhorns repeat the performance, if Collins continues to keep so many of her teammates involved, count on fourth-seeded UT having a decent chance against top-seeded and defending national champion Nebraska when the Final Four starts Thursday night in Columbus, Ohio.

“Chloe had her best weekend this weekend,” said Texas coach Jerritt Elliott. “We had some really good transition setting. We got some great points off some swings she was setting.”

Collins posted 70 assists against BYU, a career high and only four short of cracking the top-10 single-match list at Texas. Elliott praised the location of Collins’ sets, her decision-making and her ability to get the ball to the hottest hitter.

And after playing a position in which self-confidence is so critical, Collins went home and re-watched the match before reviewing her 34-assist effort against Creighton. She’s played in the past three Final Fours and is one of the best at her position in the country. Yet Collins loved the assurance she gleaned after analyzing a career effort.

“I can honestly say after I went home after both matches, I can say, ‘Wow, I contributed to this team the way I know I should have,’ ” Collins said. “I was a leader and did my job. … Just being confident in myself, going out on the floor and giving my team confidence, that’s always great, too.”

The Cornhuskers swept the Longhorns last year in the national championship match in front of an adoring home crowd in Omaha. UT suffered the same result against Nebraska in August at a tournament in Oregon. That was when UT was trying to re-discover its identity after the academic suspension of All-America middle blocker Chiaka Ogbogu. Elliott called it “one of the biggest beatings I’ve taken as a head coach.”

Like Texas, the Cornhuskers also were nearly knocked out of the tournament in the regional semifinals before they outlasted Penn State. Nebraska lost the first two sets and fought off two match points for the Nittany Lions in the third set, but the Huskers righted themselves and won in five. Nebraska then swept Pac-12 champion Washington to clinch a Final Four berth.

Since Texas lost to Nebraska more than three months ago, the Longhorns were forced to diversify their offense behind outside hitters Paulina Prieto Cerame, Ebony Nwanebu and Micaya White and middle blocker Morgan Johnson.

Collins has so many options now.

“We just have this confidence when we step on the floor,” she said, “that we’ve never had.”

Texas confirms the hiring of Drew Mehringer to football staff

Texas vs. the rest: Breaking down the NCAA Final Four volleyball field