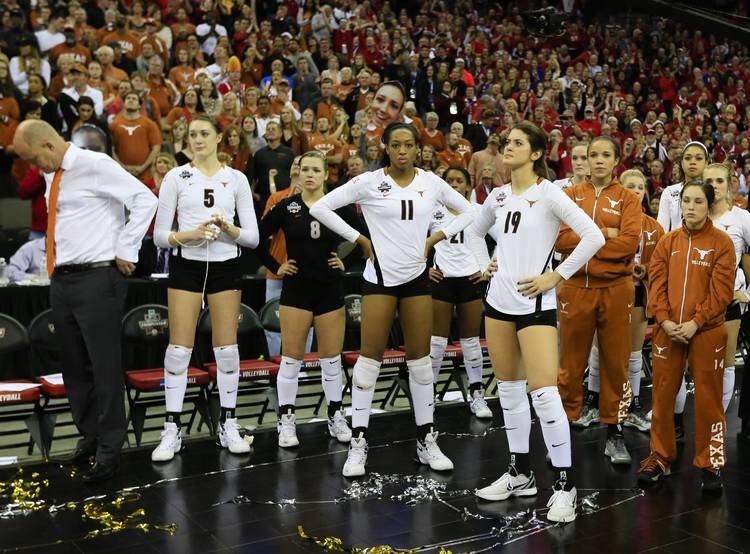 The Texas volleyball team last traveled to Columbus, Ohio in 2002. A familiar foe, though, will be waiting for the Longhorns’ return to the Buckeye State on Thursday: Nebraska.

Texas (26-4) will meet Nebraska (31-2) in Thursday’s night’s semifinals of the Final Four. It’s a rematch of last year’s NCAA championship match won by the Cornhuskers. This is the fifth straight Final Four appearance for Texas, which has run into Nebraska six times since 2013. Texas is 4-2 in those matchups, but the Huskers have taken the last two — the 2015 title match and a sweep of the Longhorns in the first week of this season.

That loss, in the VERT Challenge tournament in Oregon, still feels like a fresh wound for Chloe Collins.

“If anything, I’ve thought about our August match and how excited I am to play them again, just knowing that we have changed so much and developed as a team,” Collins said this week. “Yes, it is a bitter taste in your mind because you always want to win that national championship, but it’s a new year and I think we’re on our way to obtaining that goal.”

Texas and Nebraska are almost a year removed from the Huskers’ 25-23, 25-23, 25-21 sweep in the NCAA title match that was played in Omaha, Neb. The Huskers pulled away in the championship-clinching set, but there were 26 ties and 12 Texas leads over the first two sets.

Nebraska and Texas didn’t have to wait long for a rematch; in the second match of the season, they faced off in Eugene, Ore. The Huskers won by 10- and nine-point margins in the first two sets before closing out the match with a 25-21 win in the third. The Longhorns hit only .140, Texas’ lone sub-.200 hitting percentage performance of the season.

It was “one of the biggest beatings I’ve taken as a head coach,” said Jerritt Elliott, who took over Texas’ program in 2001 after two years at USC. Collins said Texas lacked on-court chemistry that day and played like “an amateur team” in the defeat.

“It was one of the most devastating matches because going into the match, you want to compete well and play your best, but obviously we did not,” Collins said. “Coming into this match, I think we have a certain confidence because of how we’ve been playing this past month-and-a-half.”

Outside hitters Micaya White and Ebony Nwanebu lead Texas in the kills-per-set category, but the August assembly marked only the second match back for two players who combined to play once during injury-riddled 2015 seasons. Still six weeks away from her move to middle blocker, Yaazie Bedart-Ghani was used as a backup outside hitter in the loss. Texas also played four freshmen in the sweep.

Nebraska, meanwhile, was led in kills by seniors Kadie and Amber Rolfzen. The twins are averaging 3.19 and 1.96 kills per set. Elliott also lauded the Huskers’ ball-handling and ability to receive and deliver in the service game.

“They’re the No. 1 team in the country for a reason,” Elliott said.

Texas and Nebraska have followed a similar trajectory in the postseason. Both have recorded three sweeps, and both the Longhorns and Huskers survived five-set challenges in the regional semifinals. Texas enters the week with a seven-match winning streak; Nebraska has won five straight.

Minnesota (29-4) and Stanford (25-7) will meet in the other semifinal. Here’s a breakdown of all four teams in the field.

“It’s just been a crazy year, a lot of ups and downs,” senior Paulina Prieto Cerame said after Texas knocked off Creighton in a regional final. “I’m really glad that I’m doing this with these girls, Jerritt and the rest of the staff.  We’re just really excited to be back in the Final Four again.”

Texas vs. the rest: Breaking down the NCAA Final Four volleyball field

Will the win over Tennessee get the Texas women pointed in the right direction?