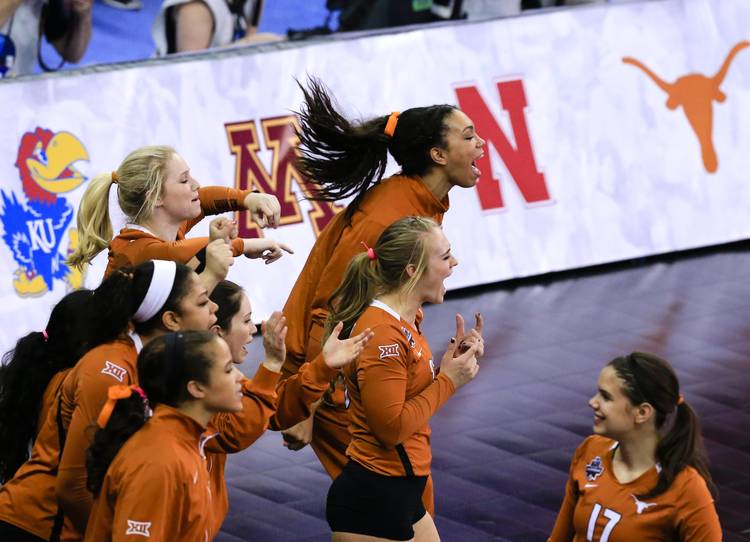 Four of the country’s most prestigious college volleyball programs descend on Columbus, Ohio this week for the NCAA championship. Texas, Nebraska, Minnesota and Stanford have combined to make 49 Final Four appearances and 12 national titles.

Here’s a look at each team heading into this week’s Final Four:

Last year, Nebraska lost only four matches on the way to winning their fourth national championship. But they’ve been even more dominant this season and are two wins away from becoming only the sixth school to repeat.

The Cornhuskers won their first 13 matches before an October conference loss to Ohio State snapped a 28-match winning streak. They then won another 14 straight before falling on the road against fellow Final Four semifinalist Minnesota in five sets.

In all, Nebraska has conceded only 18 sets all season.

Much like Texas, the Big Ten champions appear to be peaking at the right time. Nebraska’s tournament run started with sweeps of New Hampshire and TCU, setting up a regional semifinal rematch with 16th-ranked Penn State, which had taken the Huskers to five sets in early November.

The Huskers fought off two match points in the third set before coming back to win, 3-2. They then bounced No. 8 Washington in straight sets — their eighth sweep in the past 11 matches — to advance to the Final Four. Only Stanford has more NCAA Tournament all-time victories than Nebraska’s 102.

Key players: Twin sisters Kadie and Amber Rolfzen have combined for 587 kills and 265 blocks. And six of Mikaela Foecke’s 22 aces this season have come in the NCAA Tournament, including three against Penn State.

Vs. the field: Nebraska and Texas have met six times in the past four years. The Huskers are 2-4 in those matchups, though one of those wins was in the 2015 championship match. Nebraska swept Texas in the second match of the season. The Huskers split their Big Ten matchups with Minnesota.

Minnesota heads to Columbus with the least playoff experience of the remaining teams. The Golden Gophers have never won a title and have fallen in three of their four Final Four semifinal appearances.

Still, what they lack in NCAA pedigree, they make up for with momentum. Minnesota has won 14 straight matches, dropping only nine sets during that streak. Nine of those 14 wins were sweeps, including wins over North Dakota, Hawaii and No. 10 UCLA. All four of Minnesota’s losses came on the road to eventual playoff teams.

Key players: Stanford may be hard-pressed to stop senior outside hitter Sarah Wilhite, whose 512 kills is the most of any player in the Final Four. Hannah Tapp, a senior middle blocker, has added 324 kills and a .326 hitting percentage.

Vs. the field: There was the 3-2 win at home over Nebraska the day before Thanksgiving, but other recent history isn’t as good. Minnesota fell to Texas in last year’s Final Four semifinals. The last loss before this 14-game winning streak was to Nebraska, in late October. And Thursday’s Final Four semifinal will be a rematch with Stanford, who won in four sets back in August. Minnesota is 0-6 all-time vs. Stanford.

The Longhorns are certainly no strangers to postseason success. They won NCAA championships in 1988 and 2012 and have made it to five straight Final Fours.

This is the first time in six years, however, that Texas entered the NCAA Tournament without a Big 12 championship. The Longhorns finished second to Kansas by one match despite splitting the season series with the Jayhawks, who were bounced in the second round of the NCAA tournament by Creighton.

But coach Jerritt Elliott has Texas playing some of its best volleyball of the season at the perfect time. The Longhorns swept UT-Rio Grande Valley and SMU to open the postseason, then had to overcome two match points in a five-set thriller over BYU in the regional semifinal before returning to form against Creighton, their fifth sweep in the last seven matches.

Vs. the field: Thursday’s Texas-Nebraska semifinal is a rematch of old conference foes. The Huskers swept Texas in last year’s NCAA title match and swept the Longhorns again in an opening-season tournament in Oregon. Texas eliminated Minnesota in last year’s semifinals.

Stanford may be the underdog Thursday against Minnesota, but no program has more semifinal wins (14) or Final Four appearances (20) than the Cardinal. Their 6-8 record in championship games is one win shy of Penn State’s record seven titles. But they haven’t won a title since 2004, a drought that includes consecutive losses in the final from 2006-08. A win on Saturday would be truly historic; no school has ever won a title with more than six losses.

The Cardinal were the preseason favorites to win the Pac-12, but ended up third behind Washington and UCLA. Stanford lost three of four matches during a stretch in October, but rebounded to win 10 of its last 11 matches to close the regular season.

The Cardinal swept Denver and Boise State in the first two rounds of the NCAAs, then beat Florida State in four sets to set up a regional final match against No. 3 Wisconsin. The Badgers went up 2-0 before Stanford rallied for the 3-2 win, which also was its NCAA-record 113th all-time playoff victory.

Key players: Freshman setter Jenna Gray has shined in the national spotlight with 182 assists this postseason. Inky Ajanaku is tied for the team lead with 175 blocks. She also has the second most kills (329), and her .410 hitting percentage is the 13th-best mark in the country.

Vs. the field: Stanford upset then-No. 3 Minnesota in the second match of the season, 3-1.

Texas looks to snap two-match skid in Final Four rematch with No. 1 Nebraska