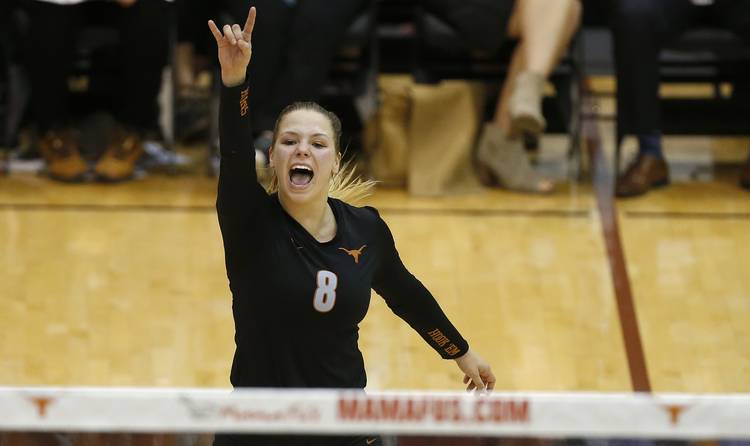 Texas’ junior libero loves to compete, even if she’s just playing a card game. That competitive streak, though, has helped her emerge as the Longhorns’ defensive ace. This week, she’ll anchor the defense again in the NCAA volleyball Final Four as Texas attempts to win a national championship.

The Longhorns (26-4), in the Final Four for the fifth straight season, meets top-seeded Nebraska (31-2) in Thursday night’s semifinals, a rematch of the 2015 national title match.

“I think a lot of people expect us to get there every year, but it’s quite the challenge,” McCoy said.

Aggressiveness is an attribute that McCoy proudly displays each time she glides across the floor in search of a dig. Her favorite drill in practice? A routine in which she must collect 10 digs from volleyballs that are either hit sharply at her or launched into nearly unreachable places around the court.

McCoy recently went into the Gregory Gym stands in search of a volleyball during an NCAA Tournament second-round win over SMU, and she knocked the holiday-themed headgear off a woman who was in the front row. It wasn’t her first collision with a fan with good seats.

“My job is to get after every ball I can,” McCoy said. “If I see a ball going into the stands, I am going to go for it no matter what.”

McCoy has been playing volleyball for more than half of her life, and she chose the sport over soccer when she became a teenager. Since she was 10, the Southlake native has lined up as a libero.

McCoy isn’t hard to spot on the court. Liberos wear a different-colored uniform than their teammates, so McCoy typically has on her black No. 8 jersey regardless of whether the Longhorns are donning their home whites or road oranges.

As a libero, she’s also not allowed to attack the net. The 5-foot-7 McCoy insists she can spike a volleyball, but her swings must be saved for practices — much to the annoyance of Texas coach Jerritt Elliott.

“It’s not just effective,” admitted McCoy, who enjoys playing beach volleyball because she’s allowed to sample all aspects of the game.

McCoy is in her third season as Texas’ libero, and she was an all-conference honoree in 2015. She’s tallying a team-high 3.96 digs per set and her 20 aces rank third on the team. She has recorded double-digit digs in all but four of Texas’ 30 matches.

Elliott said McCoy’s on-court calmness and confidence has improved this year, and both the coach and player credited associate head coach Erik Sullivan with her growth.

As a team, Texas has limited teams to a .199 hitting percentage in 2016. The Longhorns allowed eight of their first 14 opponents to hit over .200, and both Nebraska and Wichita State topped .300. In Texas’ last 16 matches, only BYU and Iowa State have hit better than .200 against the Texas defense (the Cyclones did it twice).

McCoy credited the development of sophomore middle blockers Morgan Johnson and Yaazie Bedart-Ghani for the defensive turnaround. Freshman defensive specialist Autumn Rounsaville is contributing 1.4 digs per set as McCoy’s sidekick, and senior setters Chloe Collins and Nicole Dalton and freshman outside hitter Micaya White also are assisting away from the net.

McCoy deserves her due, though.

“I feel like people don’t give her a lot of credit when she definitely deserves it,” Collins said. “She demands greatness out of herself and from people around her, and that’s one thing I admire about her. She is always, not 100 percent, but 110 percent in everything.”

McCoy will be countered by Nebraska libero Justine Wong-Orantes on Thursday. A senior, Wong-Orantes is averaging 4.24 digs per set, and she joined teammate Kadie Rolfzen, White and Texas outside hitter Ebony Nwanebu on the first team of the AVCA’s All-America team on Wednesday.

“A lot of times the liberos are not recognized for what they do,” Nebraska coach John Cook said. “There are very few liberos that have been named first-team All-Americans, so I think that’s just great respect for Justine and what she’s done and the level that she’s playing at.”

Will the win over Tennessee get the Texas women pointed in the right direction?

Charlie Strong on coaching at Texas: ‘I do not regret it at all’