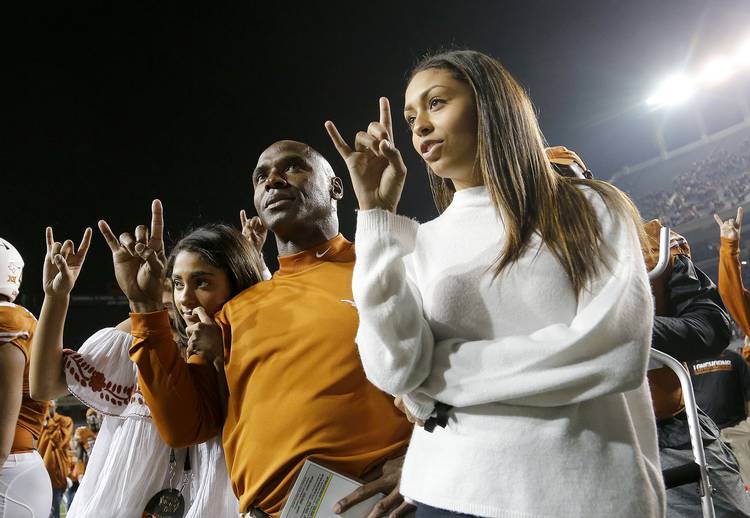 Former Texas coach Charlie Strong sings "The Eyes of Texas" with his daughters after being defeated by the TCU Horned Frogs 31-9 at Darrell K Royal-Texas Memorial Stadium on November 25, 2016 in Austin, Texas. (Photo by Chris Covatta/Getty Images)

Standing before hundreds of cheering fans in a gray suit and green tie, Charlie Strong proclaimed on Thursday, “I’m thrilled to be the coach at the University of South Florida.”

The former Texas coach was formally introduced at his new position in Tampa, Fla., as just the fourth leader in USF’s brief 17-year history. It appears to be a perfect fit for a coach with deep Florida coaching roots and a long history of recruiting in the Sunshine State.

Strong called his three years at Texas a great experience, “and it’s one I’ll never forget.” He was not asked about the Longhorns during the press conference. During an interview afterward with ESPN, Strong said, “I would go do it again. I do not regret it at all.”

“I know some things were said when we first took over the job there, but I felt like the support was there,” Strong said. “Steve Patterson was the athletic director that hired me, and then Mike Perrin comes in as the AD. They were always supportive. Those are two guys I really respect right now.

“But when you don’t win games and you’re at a place like the University of Texas, this is what’s going to happen to you,” he added. “You have to win football games.”

Strong was 16-21 during his three years at Texas, giving him the lowest winning percentage (.432) of any coach in UT history.

Some national observers believed Strong did not have internal support. That’s mostly because mega-booster Red McCombs said Strong would make only “a fine position coach, maybe a coordinator” the same day the coach was hired.

The reality was Strong had incredible support from UT Presidents Bill Powers and Gregory L. Fenves during his tenure. Both Strong and his assistants had guaranteed contracts, a first in UT history. Fenves even flew to Tulsa, Okla., in December 2015 to help hire offensive coordinator Sterlin Gilbert.

Strong ultimately left with two years left on his contract worth $9.4 million. Strong signed a five-year deal at USF with mostly backloaded money. USF will pay Strong $1 million each of the next two years with Texas picking up the rest of the tab — $4.7 million in 2017 and 2018.

Strong becomes only the second black coach in FBS history to get fired and then rehired somewhere else. Notre Dame dumped Ty Willingham after going 21-15 in three years at Notre Dame. He was then hired at Washington and went 11-37 in four seasons.

USF fans have every reason to support Strong and keep the program’s momentum going. The Bulls are 10-2 heading into the upcoming Birmingham Bowl against South Carolina on Dec. 29. Co-offensive coordinator T.J. Weist, who was named interim coach after Taggart’s resignation, will lead the 25th-ranked Bulls in the game.

The school is also pushing to build a new on-campus football stadium.

“Though I’m disappointed in the record, I’m very grateful for the opportunity I had at the University of Texas,” Strong said during the USF press conference. “We built a program, we put a foundation in place that will allow them to have great success in the future, similar to what coach (Willie) Taggart has done here.

Strong then pivoted to his new position and said, “But those are the days and that has passed us by. Now, it’s time to get on and time to continue to build a program here.”