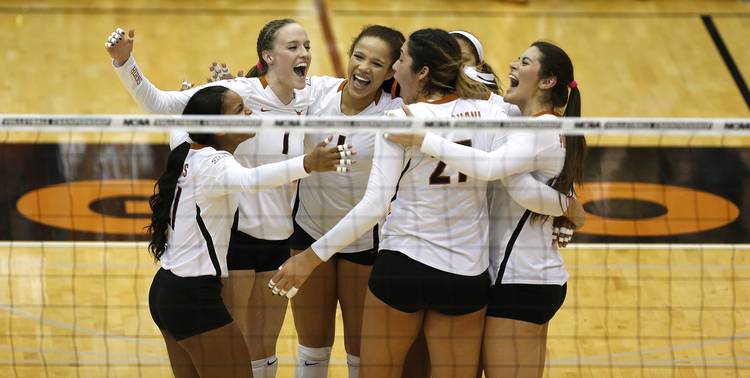 Texas celebrates a point against SMU during the second-round of the NCAA tournament at Gregory Gym Saturday, Dec. 3, 2016. (Stephen Spillman / for American-Statesman)

COLUMBUS, Ohio — Thursday night, Texas beat a familiar foe to get to a familiar place.

Ebony Nwanebu hammered home 15 kills in No. 4 Texas’ 25-18, 25-23, 25-21 sweep over top-seeded and defending national champion Nebraska in the NCAA semifinals of the Final Four. The Longhorns, who won the national title in 2012, will meet No. 6 Stanford on Saturday night in the championship match at Nationwide Arena.

It was Texas’ fifth sweep in its last six matches. And it avenged last year’s NCAA championship match loss to the Cornhuskers.

“We’re just so happy that we built this opportunity for ourselves,” senior setter Chloe Collins said. “To go out and play the way we played against Nebraska was absolutely tremendous. We’re just all smiles and trying to soak in this moment while we can and then focus on Stanford on Saturday.”

Nebraska (31-3) had won two straight over Texas — both sweeps, in last year’s championship match and again in the first week of this season. The Longhorns knew they were viewed by many as the underdog in Thursday’s semifinal, but they seemed to embrace that role. Still, Collins admitted that there were pre-match feelings of excitement, nerves and anxiety.

The match, the second semifinal of the night after Stanford’s 26-24, 25-19, 22-25, 25-22 upset over No. 2 Minnesota, didn’t start until around 10 p.m. in Columbus, which made for a long day for a team that ate breakfast at 9 a.m. Texas held a practice in the morning, then killed five hours at the team hotel with naps, treatments and Netflix. During the Stanford-Minnesota match, the Longhorns stayed in their locker room and stayed loose by listening to music and dancing.

Then it was time to get to work.

“Our whole mindset throughout the day was just focusing on us,” Collins said. “At the end of the day, it’s between us and no one else out there. We all emphasized that, and we came together even more than we did before. We built off that.”

Texas trailed only once in the opening set, as freshman Micaya White and senior Paulina Prieto Cerame each had four kills. There were 14 ties and three lead changes in the second set, and the Longhorns overcame four service errors to earn a two-point win. At the intermission, Prieto Cerame led all players with 10 kills. She finished with 12.

“I just wanted to smash the ball,” Prieto Cerame said. “I wanted to be aggressive and I wanted to be smart and get that W for us. I think Chloe did an awesome job getting me those out-of-system sets when we weren’t passing perfect, and same with the whole team.”

Texas controlled much of the third set, but twice had to hold off a Nebraska rally. The Longhorns put together short scoring spurts after Nebraska pulled within 16-15 and 19-18, and were able to keep the Huskers at arm’s length. Morgan Johnson’s fourth kill ended the match.

“In the timeouts, we were just talking about (how) we can’t be satisfied with the score,” said senior Nicole Dalton, the last remaining member of Texas’ 2012 title team. “We just kept talking about being relentless, and the coaching staff did a really good job of keeping us composed.”