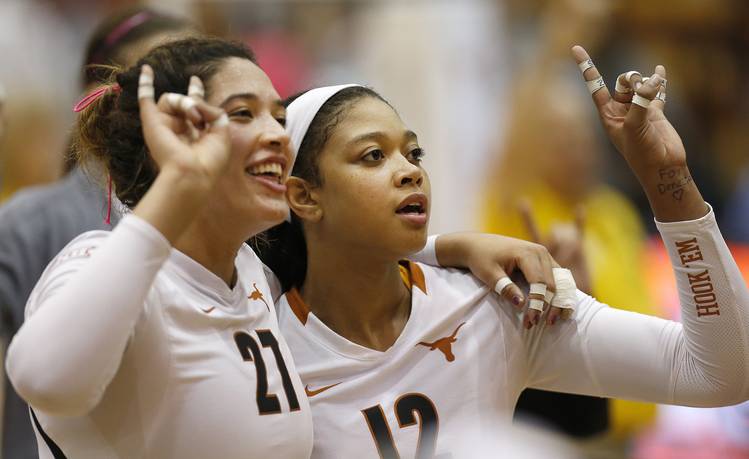 COLUMBUS, Ohio — Before each match, Texas middle blocker Morgan Johnson must listen to Phil Collins’ “In The Air Tonight.”

To her ears, the final 90 seconds of that 1981 anthem are “superb.” Johnson, though, isn’t in charge of the music selections in Texas’ locker room — junior libero Cat McCoy put together the oft-used pre-game playlist — so she must use her headphones.

Her biggest contributions, anyways, can be found in the form of blocks.

Johnson is responsible for 145 of Texas’ 298.5 blocks this season, 18 of which have been solo stuffs. Alongside fellow sophomore Yaazie Bedart-Ghani, she has solidified the middle of Texas’ offensive and defensive presence. Texas (27-4) will meet Stanford (26-7) for the NCAA volleyball title on Saturday night.

“Obviously it’s an exciting time,” Johnson said. “Every team dreams of being in our position, and we’re so grateful to be in this position and have the opportunity to go out and represent our university to the highest.”

Texas opened this season with an unexpected hole on its roster when All-American middle blocker Chiaka Ogbogu was ruled academically ineligible. Texas gave playing time to freshmen Orie Agbaji and Blair Westerlund before settling on the combination of Johnson and Bedart-Ghani, who were members of the 2015 signing class.

“It’s been the key to our season and the key to the development of this team,” Texas coach Jerritt Elliott said.

To offset the loss of Ogbogu, Johnson transitioned from the “M1” position in Texas’ scheme to the “M2.” (The biggest difference between the two positions is where and how the middle blocker attacks). Bedart-Ghani, who was an NCAA all-tournament honoree in 2015 as an outside hitter and hadn’t played middle blocker since the eighth grade, was then moved by Elliott to the M1 spot in October.

Johnson had a solid start to her sophomore season, but she broke out with six blocks and 10 kills on 15 swings in a sweep of TCU on Oct. 19. Two months later, the last of Johnson’s four kills closed out Thursday’s semifinal sweep of Nebraska that also featured her team-high seven blocks.

Bedart-Ghani, who blocked nine attempts during her second game in the middle, also has given Texas an effective weapon to pair on offense with outside hitters Micaya White, Ebony Nwanebu and Paulina Prieto Cerame. Bedart-Ghani’s .371 hitting percentage trails only Nwanebu’s .384 among Big 12 qualifiers. In Texas’ NCAA Tournament opener against UT-Rio Grande Valley, Bedart-Ghani converted a staggering 13 of her 14 swings.

“It’s been tremendous to our team, the way they have just bought in,” senior setter Chloe Collins said.

Both Bedart-Ghani and Johnson needed time to make adjustments this fall, especially when it came to footwork. Bedart-Ghani also said she had to improve her hand positioning on block attempts while getting used to a higher set from Collins. Elliott commended both players for their conditioning work.

“It was kind of rocky at the beginning,” Johnson said. “But as the season progressed, we started getting better and building that confidence and chemistry, and I feel like we’ve peaked at the right time.”

At 6-4, Bedart-Ghani and Nwanebu are the tallest players Texas has, and Johnson is only an inch shorter. On Saturday, though, Texas will be looking up at its competition.

Stanford’s 6-6 Kathryn Plummer (413), 6-6 Audriana Fitzmorris (301) and 6-8 Merete Lutz (289) rank first, third and fourth on the team in kills, and Fitzmorris and Lutz are each averaging at least one block per set. Three-time AVCA All-American middle blocker Inky Ajanaku is producing 2.84 kills and a team-best 1.52 blocks per set, and the 6-3 senior isn’t even among her team’s five tallest players.

So how will the Longhorns prepare for Stanford?

The high school-to-college learning curve is steep, even for Texas’ star recruits