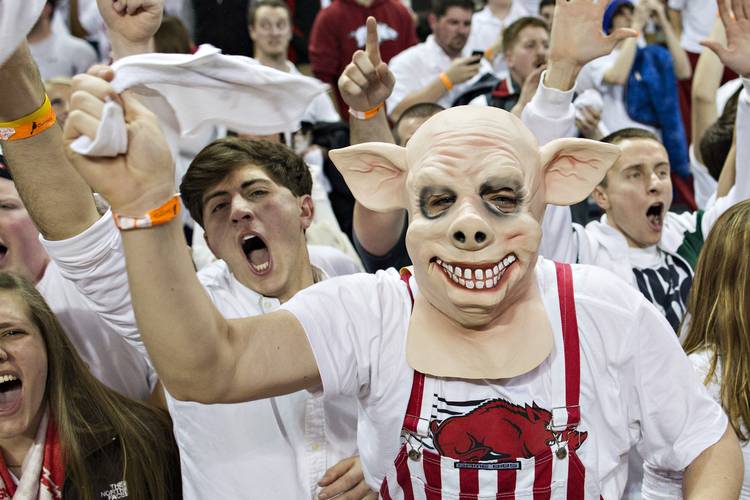 Fans of the Arkansas Razorbacks celebrate after an overtime win against the Kentucky Wildcats at Bud Walton Arena on January 14, 2014 in Fayetteville, Arkansas. The Razorbacks defeated the Wildcats 87-85. (Photo by Wesley Hitt/Getty Images)

It’s now been 14 years since Nolan Richardson left the Arkansas sideline and 25 years since Razorbacks fans were calling the Hogs on a regular basis around these parts.

The red-hot rivalry between Texas and Arkansas dried up once Frank Broyles and company left the Southwest Conference for the SEC in 1991. All that’s left are remnants scattered around one’s gray matter, faded memories of a bygone era, same as it will be for the Texas-Texas A&M rivalry some time soon.

Asked what he knew about the Texas-Arkansas rivalry, UT freshman Jacob Young said, “Not aware of that one. That’s new to me.”

Graybeards, though, will love the matchup on Saturday in Houston. Texas and Arkansas meet again in what’s dubbed the Lone Star Shootout at the Toyota Center. It’s the 154th basketball meeting between the two schools, but the first since Jan. 4, 2011.

It’s the second game of a doubleheader. Texas A&M and Arizona will serve as the warmup act at 11 a.m.

“I’ve had some people tell me all about it,” Texas coach Shaka Smart said of the rivalry. He’s 39, which means Smart was 13 years old when Oliver Miller poured in 23 points as Arkansas crushed Texas 120-89 to win its last SWC tournament championship in Dallas. Not a single player on either of today’s rosters was alive then.

“It’s something that I have a lot of respect for, just looking back as past teams and looking back at the old conference,” Smart said. “I’m a big fan of Nolan Richardson and what he did there. A ton of people were and are.”

Arkansas coach Mike Anderson said he didn’t even bother bringing up the rivalry this week.

“Nah, I just talk about us getting better. That’s all,” Anderson said. “It’s the next game on our schedule. We’ve got a great opportunity in front of a national audience to go and do something we haven’t done this year, that is we haven’t won on the road.”

Technically, this isn’t a road game for either team. The Razorbacks (8-1) hope to prove they can win away from Bud Walton Arena while the Longhorns (5-4) just want to win anywhere.

The young Horns have made things difficult on themselves at times. They dug out of a 12-point hole and stormed back to beat Alabama. Texas then erased a 10-point deficit at Michigan, but wound up losing by three. UT fell behind by 12 to Long Beach State and battled back to win by six.

“There’s been growth and maturity,” senior Shaq Cleare said. “The guys are understanding that we’ve got to fight, we’ve got to battle. When in doubt, just fight. Go to war for your brother.”

Arkansas is one of the fastest teams in Division I. The Hogs average 14.6 seconds per possession and get 16.4 points off fast breaks. To battle that, teams slow it down when they have the ball, sometimes walking it up the floor and getting into half-court sets.

Texas, which doesn’t have a dyed-in-the-wool point guard, has struggled in those situations. The Horns don’t have anyone among the Big 12’s top 15 leaders in assists per game. Kerwin Roach Jr. averages a team-high three assists per game. Texas has a league-low 97 assists.

The Horns aren’t afraid to run, though. Young searches for open 3-pointers on the wings in transition. Roach has his eye out for open lanes to the basket. Eric Davis Jr. and Andrew Jones are ready to swing the ball or take open jumpers as trailers.

Tevin Mack (15 points) is the only UT player in the top 20 among Big 12 scoring leaders.

Playing in their hometown may give Young and Cleare a boost. Young grew up in Houston while Cleare moved there from the Bahamas to attend high school.

“Like coach Smart says before every game, ‘No matter if we win or lose, we’re going to have to grow regardless,’” Young said. “Everybody in the locker room takes that as a positive.”

The high school-to-college learning curve is steep, even for Texas’ star recruits