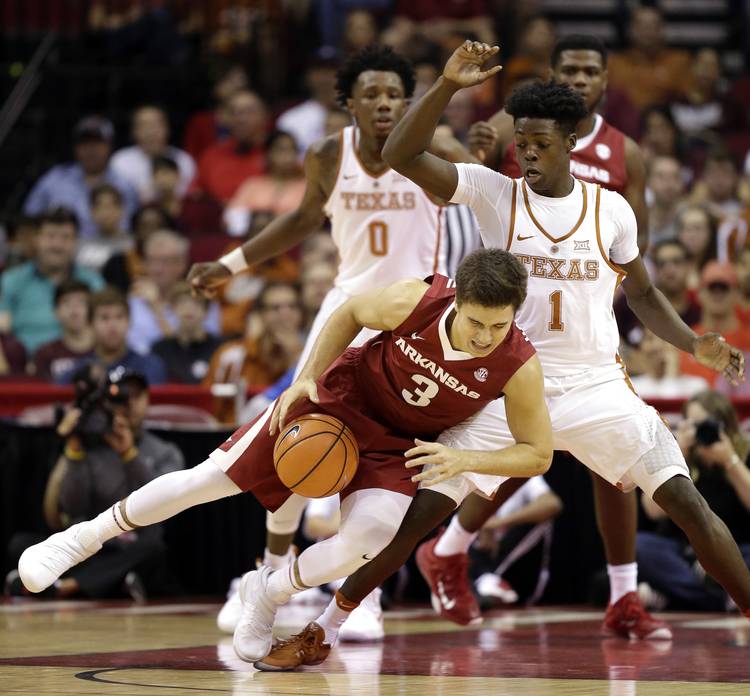 HOUSTON — The one player Texas could’ve used on the final possession Saturday against Arkansas was sitting in the stands wearing black sweats. Oh, how these Longhorns miss Isaiah Taylor.

Nowadays, Taylor plays for Houston’s NBA Development League team in the Rio Grande Valley, which he claims is “damn near Mexico.”

Merely an interested spectator, the former Texas guard could only watch as Kerwin Roach Jr. ended a madcap final possession with an awkward 3-pointer. His air ball didn’t have a chance as the Razorbacks corralled the rebound and pocketed a 77-74 win at Toyota Center.

“Just going through what Kerwin, Eric, Andrew, Jacob, all the guards, it’s just a learning curve,” Taylor said. “They have the athletic ability. They have the speed. It’s just learning the game, that’s it.”

The Longhorns (5-5) will go home, study the tape and see they keep doing a handful of things extremely well. For example, Tevin Mack (20 points, 12 rebounds) and Jarrett Allen (11 points, 10 rebounds) both had double-doubles. Freshman Andrew Jones had 17 points and seven assists in his best game of the season.

But the Horns missed 17 layups and 13 free throws. They held the Razorbacks to 36 percent shooting and just 4 of 16 from 3-point range. But it was coach Mike Anderson’s club that went on a 10-1 run after Texas tied things up 61-61 with 4:41 remaining.

“The message is we’ve got to get better,” Texas coach Shaka Smart said. “Fortunately or unfortunately, you must take a hard look at the areas where you’ve got to be better.”

“I didn’t mean it disrespectfully,” Hannahs said. “I was in the heat of the moment, trying to get our fans loud, and it worked.”

The Longhorns must be wondering why things aren’t working for them.

There were individual moments the coaching staff will love. Mack lost the ball for a bad turnover early but continued to be aggressive and wound up tying his career high in points. Jones had terrific defense on Hannahs at one point and forced the Arkansas senior to travel. The Hogs (9-1) made only one of the last nine shots before halftime.

The casual Texas fan who doesn’t watch many games had to be impressed with Allen, the freshman from St. Stephen’s. He was more animated on the floor, directed traffic and was vocal on defense. His left-handed jam over Moses Kingsley, the SEC preseason player of the year, was a posterizing moment NBA scouts will love.

“I think everybody needs to be more aggressive, especially me,” Allen said. “We all need to grow.”

Texas was in control early in the second half. But Hannahs’ 3-pointer kick-started a 13-3 run that spanned 3:30. At that point, Arkansas had a 54-45 lead. Shaq Cleare answered with back-to-back buckets on putbacks and another layup in traffic, and suddenly it was tied again after Jones’ three-point play.

And yet almost three minutes later, Texas was back in a nine-point hole. But the Horns weren’t done yet. Mack scored, Jones hit two free throws, and then Mack ultimately cut it to three with 17 seconds left. Arkansas botched an inbounds play, and UT had one more chance.

Smart preferred Mack to get a final look, but the sophomore couldn’t get open. “I wanted the shot,” Mack said. “I want to be the one to make the shot, take the shot at least. But we didn’t get it there.”

Roach threw it to Jacob Young, who probably would’ve tried a contested 3-pointer in the corner if given a mulligan. Instead, the ball went back to Roach, who missed a desperation heave.

“We didn’t shoot nearly as well from the foul line, and we did miss a lot of layups,” Smart said. “We just need to keep getting better at our skill.”