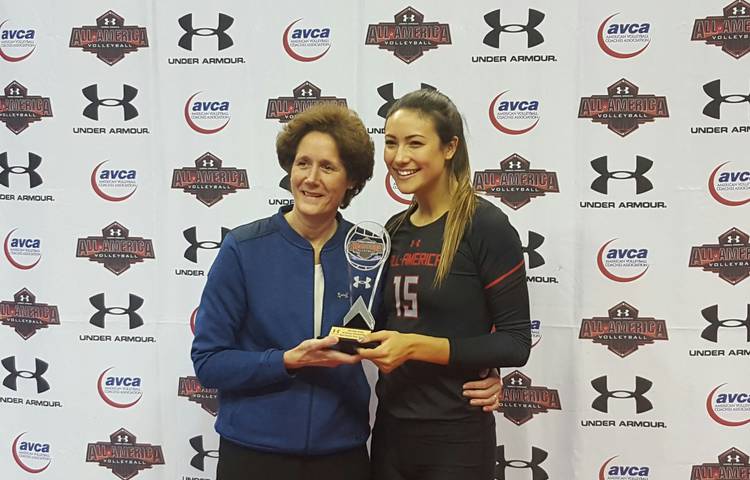 Texas recruit Lexi Sun is honored following her performance in the Under Armour All-America match on Dec. 16, 2016 (Danny Davis/American-Statesman).

COLUMBUS, Ohio — This week, Lexi Sun and Ashley Shook were both roommates and rivals.

Sun and Shook were among the 24 athletes who participated in the Under Armour All-America volleyball match on Friday night. Both Texas signees, Sun and Shook competed on opposing sides of the net at the Nationwide Arena. Sun’s West team recorded a 25-16, 25-21, 25-16 win over Shook’s East squad.

“It was a great experience getting the opportunity to play with some girls that I had played with before and some that I hadn’t,” Sun said. “Just getting to know them and play with them, they’re such amazing players. The coaches that were selected, I loved them as well.”

With Texas volleyball coach Jerritt Elliott in attendance, Sun was named the MVP of the West team after she led all players with her nine kills. A six-foot-two outside hitter who PrepVolleyball.com has rated as the nation’s top recruit, Sun also collected three service aces.

Shook contributed eight assists and four digs to the East’s efforts. The 6-2 Shook, who checked in at No. 6 on the aforementioned list of 2017 recruits, also finished in a second-place tie in a competition for the evening’s top setters.

“I know we lost in three, but it was definitely competitive on both sides,” Shook said. “We still wanted to win, but it’s OK.”

Sun and Shook account for half of Texas’ 2017 recruiting class, and they were the only Texas representatives at the Under Armour festivities. The two players were acquaintances beforehand — Sun and Shook respectively hail from Solana Beach, Calif., and Plainfield, Ill. — but they were given the opportunity to bond this week as roommates. Shook said she learned that Sun was “spunky,” while Sun described her future teammate as “even-keeled.”

In addition to playing in the all-star game, the Under Armour All-Americans got to meet beach volleyball star Kerri Walsh Jennings and attend a banquet that featured the AVCA’s collegiate All-Americans. Sun and Shook watched on Thursday as Texas beat Nebraska in a national semifinal match, and they’ll return to Nationwide Area on Saturday to root on the Longhorns in the NCAA championship match.

That Texas team currently features eight players who were once Under Armour All-Americans, six of which — juniors Ebony Nwanebu and Cat McCoy, sophomores Yaazie Bedart-Ghani and Morgan Johnson and freshmen Micaya White and Orie Agbaji — will still be in Austin when Sun and Shook arrive in 2017. And as if there was any doubt, both of the incoming recruits were picking the Longhorns to beat Stanford for the NCAA title.

New kids on the block: Texas’ Johnson, Bedart-Ghani have tall task vs. Stanford