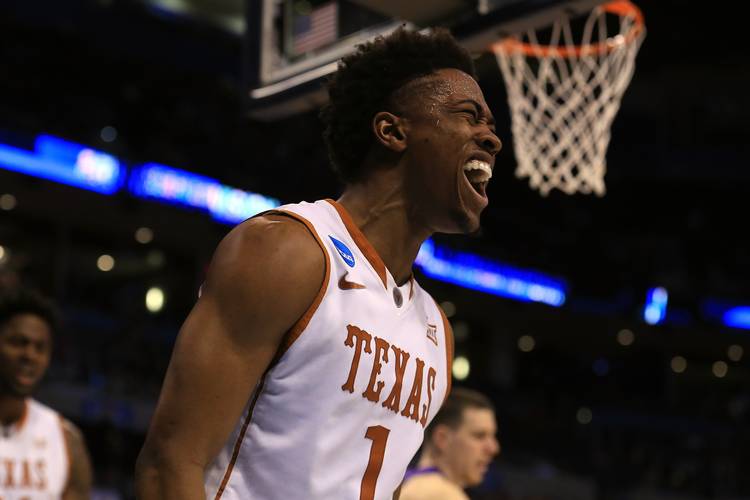 Guard Isaiah Taylor, playing against Northern Iowa in the NCAA Tournament last season, would be the Horns' go-to force this year if he had stayed at UT. (Photo by Tom Pennington/Getty Images)

HOUSTON — Try to tell Isaiah Taylor he was insane for leaving Texas after his junior season, and he’d laugh at you. For those who think he spends his days wallowing in regret, forget it.

Taylor emerged from the UT locker room Saturday and flashed his electric smile inside Toyota Center. He was the only Longhorn past or present who was smiling after Texas suffered a 77-74 loss to Arkansas in a game dubbed the Lone Star Shootout.

“It’s kind of like a grind, and that’s the kind of culture I came from,” he said. “People look at the D-League as kind of a setback, but I think ever since I got there my numbers have been getting better.”

Had Taylor stayed at Texas for his senior season, he’d be the Horns’ go-to offensive force and easily one of the best players in the Big 12. The explosive 6-foot-2 guard would also be a good influence on freshman guards Andrew Jones and Jacob Young.

But Taylor left Austin after averaging 15 points and five assists last season. He went undrafted but quickly signed as a free agent with the Rockets, his new favorite team in his adopted hometown. The California native spent his high school days at The Village School in Houston.

Taylor went through preseason camp with the Rockets before getting assigned to Rio Grande Valley. He signed a two-year contract worth $1.4 million, but only $50,000 was guaranteed.

“I kind of got my feet wet, and now that I’m in the D-League, I can show what I can do,” Taylor said. “I’ve always had confidence. But now I’m learning who I am and what I can do in this league.

“Honestly, not being drafted, most people are devastated,” he added. “For me, it was like, ‘Whatever.’ I’m going up against a lot of people who got drafted in the D-league, and I think the numbers are showing who the better person is.”

The big question about Taylor’s pro potential was his 3-point shooting ability. He shot 29 percent from beyond the arc in three seasons with the Longhorns. That’s a below-average total for a future pro, truth be told.

After countless hours in the gym, Taylor shot 45 percent from 3-point range in six games this season for the Vipers. He has gone 4 for 8 from downtown twice already this season. Taylor is averaging 25.7 points and shooting almost 55 percent overall. He’s currently working through an undisclosed injury.

“He’s been great for us,” Vipers coach Matt Brase told the McAllen Monitor last month. “He’s a fast point guard who’s strong. He’s great at getting to the rim, and in terms of my interactions with him, he’s a competitor who wants to win and who has a great spirit for the game.”

The biggest adjustment is dealing with life in the D-League. At Texas, players fly on charter planes and stay in top-flight hotels. D-Leaguers ride the bus sometimes and play before sparse crowds.

“I thought there was a lot of egos in college,” Taylor said. “In the D-League, it’s crazy. You’d come to some of our practices, you wouldn’t believe some of the stuff.”

Taylor flirted with the idea of going pro after his sophomore season but stayed because of Texas coach Shaka Smart. The two have grown close the past two years.

If the current Longhorns buy into Smart’s plan, the program will be in great shape in the future, Taylor said.

“I wish I had Shaka all throughout college. He was great,” Taylor said. “He changed my perception on basketball and just on my teammates altogether. He made me believe things that he was advocating for me for the team. I was bought in real quick to whatever his plan was, each game plan and stuff like that.”

Texas unable to hold off Stanford in NCAA championship match