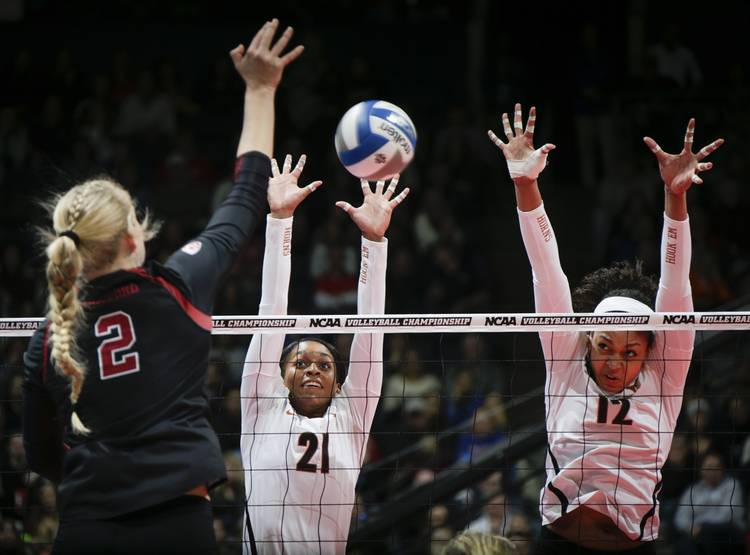 COLUMBUS, Ohio — All the Texas Longhorns could do was watch.

Much like the 17,345 spectators at the Nationwide Arena, the Longhorns eventually just became witnesses to Stanford’s celebration of a NCAA championship on Saturday night. As gold and silver streamers littered the floor and DJ Khaled’s “All I Do Is Win” blared over the speakers, there was nothing else for the Longhorns to do.

Stanford (27-7) claimed the NCAA’s Division I volleyball title with a 25-21, 25-19, 18-25, 25-21 win over the Longhorns. Swept by Nebraska in last year’s finale, Texas (27-5) earned runner-up status for a second straight season. Texas was making its fifth straight trip to the Final Four, but the team was unable to secure its first championship since 2012.

“It’s pretty frustrating putting in all that work and coming up short,” junior libero Cat McCoy said. “I’m just really proud of the fight of the girls. Coming out the way we did in the third set really shows how tough we are, and Stanford just played a really good game.”

Texas pulled ahead in both of the first two sets, earning 18-15 and 18-16 leads. The Longhorns, though, entered the intermission facing a 2-0 deficit after Stanford sprinted to the finish line in both sets.

“Stanford’s a good team,” sophomore middle blocker Morgan Johnson said. “They got on long rallies that we couldn’t put a stop to. They kept putting together points where we just put in one or two points, and so that added up.”

Following the break, Texas mixed up its line-up. Freshman middle blocker Orie Agbaji, who had played twice in Texas’ previous 17 matches, was inserted into the action, which allowed Yaazie Bedart-Ghani to move over and replace senior Paulina Prieto Cerame on the outside. Prieto Cerame, an all-Big 12 outside hitter who had registered 12 kills in a semifinal win over Nebraska, had connected on just two of her 26 attempts in the first two sets.

The on-court shuffle gave Texas the spark it needed in the third set, and the Longhorns kept Stanford at a distance in a seven-point win.

“We went for it and it paid off,” Elliott said. “We just started off slow in game four, otherwise it would have been a lot closer.”

Texas was attempting to rally from a 2-0 hole for the first time since a win over West Virginia in 2014. Stanford, however, extinguished those hopes with a 6-0 start to the fourth set. The Longhorns never got closer than three points, and Kathryn Plummer closed out the match with her match-high 18th kill.

“It doesn’t feel great,” Johnson said. “Obviously, we wanted to come out on top, but we didn’t. Now we just have to prepare for next season and know that this will not be the outcome next season.”

Facing a Stanford team that boasted five players who are at least six-foot-four, Texas hit .217. Freshman Micaya White and junior Ebony Nwanebu, who both earned all-tournament honors, respectively led Texas with their 17 and 16 kills. Bedart-Ghani earned 11 kills on 22 attempts.

Stanford middle blocker Inky Ajanaku was named the tournament’s most outstanding performer after she complemented Plummer’s performance with 16 kills and eight blocks. En route to winning its seventh NCAA championship — which moved Stanford into a first-place tie with Penn State in that category — the Cardinal posted three straight wins over this tournament’s second, third and fourth seeds.