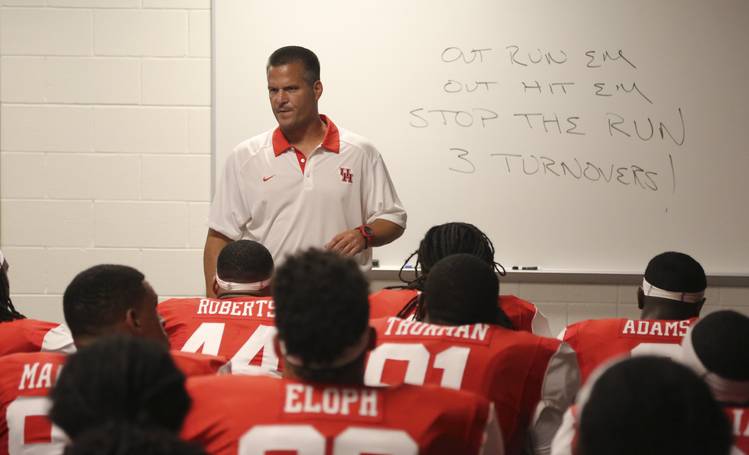 Todd Orlando is walking into the most difficult assignment of his professional career as the defensive coordinator at Texas.

Orlando and Craig Naivar, Houston’s safeties coach, were formally named to the Texas coaching staff on Monday. Both hires had been expected for more than a week. UT also announced the hiring of strength coach Yancy McKnight and Tory Teykl as director of football operations.

“Todd is as good as it comes in a defensive coordinator,” Herman said in a statement. “He did an unbelievable job for us at Houston and has long track record of leading defenses that speaks for itself.”

And he’ll be paid handsomely for the effort. Orlando will receive a three-year contract believed to be worth $1 million, which would make him the highest paid assistant in Texas football history. Before anyone faints, understand that’s the going rate for coordinators these days at major football factories.

“Our defense is going to be multiple,” Orlando said in a statement. “It’s an attack kind of mode. It’s player friendly in terms of the concepts, and it’s very learnable. To have some of the athletes that I know we are going to have here to be able to do it will be exciting.”

McKnight will be front and center with the Longhorns when offseason workouts resume after the holidays. In January and February, strength coaches have more impact on a team’s day-to-day chemistry than anyone else.

“I think the expectations and traditions at The University of Texas are obvious,” McKnight said in a statement. “That’s what we’re going to expect on a day-to-day basis in every single rep, every single practice, and every single day that we train. It’s all going to be about winning championships.”

Herman now has two vacancies left to fill — offensive coordinator and another offensive assistant, most likely a running backs coach.

Orlando played linebacker at Wisconsin and then started his coaching career in Pennsylvania high schools. He eventually caught on as a linebackers coach at Connecticut and later served as the Huskies’ defensive coordinator from 2005-10.

He had coordinator stops at Florida International (2011-12) and Utah State (2013-14) before joining up with Herman in Houston.

In 2015, the Cougars held 12 teams below their typical scoring average and led the nation with 35 takeaways. This year, his attacking style accounted for 39 sacks, tied for 11th most in the nation. Houston also finished the regular season ranked fourth nationally in run defense (100.2).

The American Athletic Conference isn’t quite the Big 12, though.

Under former defensive coordinator Vance Bedford, Texas had some of the worst numbers in school history. The 2015 unit allowed 30.3 points per game. The Longhorns gave up 38.3 points in the first four games this season and Bedford got demoted as the defensive play-caller.

At least Orlando has plenty of experienced Longhorns returning next season.

Breckyn Hager and Malcolm Roach are disruptive forces off the edge. Linebacker Malik Jefferson may feel revitalized under new guidance. Kris Boyd, DeShon Elliott and Brandon Jones may welcome a new voice in the defensive backfield in Naivar.

“There’s a certain way things are done, and (Herman) should not have to explain that to guys he’s been with,” Orlando said. “I think that’s really important. The staff itself, having worked with those guys, they understand their roles and understand what we have to do.”