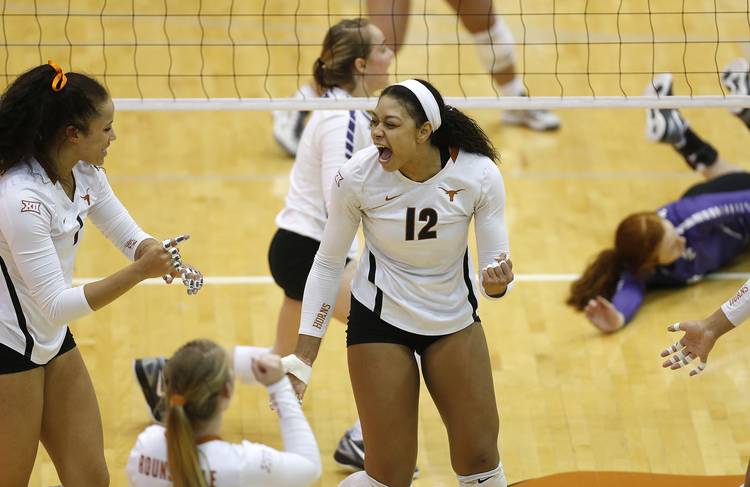 When the 2017 volleyball season begins, expect the Longhorns to be hungry.

Having reached the Final Four in each of the five past seasons, Texas is hardly starving for success. Texas, though, last won a national championship in 2012, and the team has been the NCAA Tournament’s runner-up the last two years. The latest silver showing — last Saturday’s 3-1 loss to Stanford in the NCAA championship match — ended the season on a sour note.

“Now everyone on the team has felt how it feels to make it to this point and not get the result that we want,” middle blocker Morgan Johnson said. “Now everybody has the same drive and has the same hunger for a championship.”

And when Johnson says everybody, the sophomore isn’t exaggerating. Fourteen of the 17 players on Texas’ roster are underclassmen.

Freshman Micaya White and junior Ebony Nwanebu led the team with their 479 and 423 kills this season, and both outside hitters were first-team honorees on the AVCA’s All-America team. Johnson will return next year after ranking second in the Big 12 with 150 blocks, and coach Jerritt Elliott has spoken optimistically about the potential of freshman middle blocker Orie Agbaji. Sophomore Yaazie Bedart-Ghani also will give Elliott some flexibility as she transitioned from outside hitter to middle blocker this fall.

Texas also should be boosted by the return of middle blocker Chiaka Ogbogu, who was sidelined by academic issues this season. Ogbogu will rejoin the Longhorns in January, and the three-time All-American will offset some of the depth problems that Texas dealt with during her absence.

“We’ve got the pieces next year to be extremely special,” Elliott said. “The areas of weakness that we had should be fixed. I think our backcourt could be even better, and I think our blocking could be significantly better. It’s my job to create the chemistry and unity to make that happen. Because on paper, it’s going to be one of our best teams.”

While the roster will look similar in 2017, the loss of three seniors will leave the team with needs that must be addressed.

Setter Chloe Collins was a second-team All-American who exits Texas in fourth place on the school’s assists list, and outside hitter Paulina Prieto Cerame averaged 3.5 kills per set. Nicole Dalton had a role on defense, but the third-year captain’s leadership will be tougher to replace.

“There aren’t enough words in the dictionary to say how much they mean to us and the program,” Johnson said of the outgoing seniors. “They’ve given us so much confidence and love and the season has just been amazing because of them.”

Additional help is on the way for the Longhorns in the form of a four-player signing class that features three of the nation’s top six prospects. California-raised outside hitter Lexi Sun was rated by PrepVolleyball.com as the country’s best prospect, and Boling middle blocker Brionne Butler was ranked second.

Illinois native Ashley Shook was sixth on that list of top recruits, but she may attract the biggest spotlight on the Texas campus. With Collins now gone, Shook will join freshman Riley Fisbeck as the only setters on the roster.

“I would like to start as the starting setter, but I know that’s a lot for a freshman, so I’m going to come in ready to compete,” Shook said last weekend after taking part with Sun at last week’s Under Armour All-American match. “I want to win a Big 12 championship with the team and a national championship (in the) first year, and hopefully all four.”

Following the loss to Stanford in the championship match, reporters gathered around Johnson, McCoy and Rounsaville in a silent — yet crowded — locker room. On the other side of Nationwide Arena, White and Nwanebu sat next to Elliott in a post-game press conference.

The vibe in both rooms was the same. The Longhorns have set their sights on Kansas City, which will host the 2017 Final Four.

“I have one more season to win a championship,” Nwanebu said. “I know Caya (White) said in the locker room that all of us need to work our butts to get to this point next year and have a different outcome, and I’m going to do everything in my power to do that.”