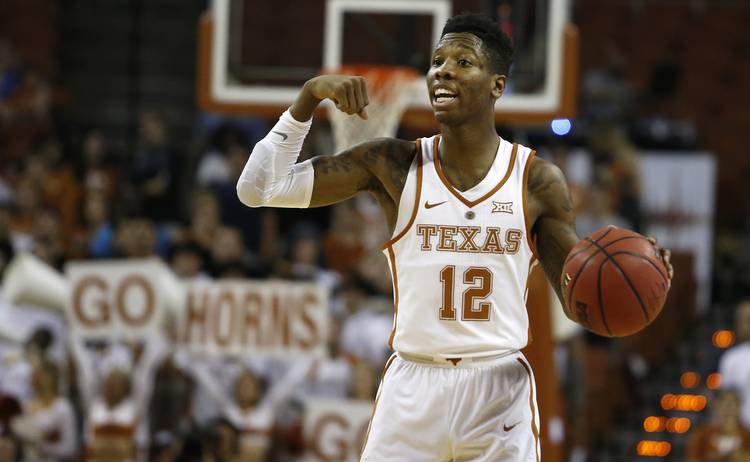 When the season began, Texas coach Shaka Smart said the Longhorns would have to play “point guard by committee.” There simply wasn’t a clear-cut choice among the candidates.

Ten games into a .500 season, Texas still doesn’t have any answers at arguably the game’s most important position.

Kerwin Roach Jr., Andrew Jones and Eric Davis Jr. have all rotated at the point, but nobody has solidified himself as that critical court leader. Jacob Young could play in a pinch, but he appears more comfortable as a shooting guard on the wings.

The experiment continues Wednesday against Alabama-Birmingham (6-5) at the Erwin Center.

“I wish I could tell you one guy where that’s the guy,” Smart said Monday. “But we just don’t have that situation right now until someone is to emerge and become that.”

The Longhorns’ current plight explains why Smart and his assistants are chasing Matt Coleman, a senior at Oak Hill Academy in Virginia. The four-star recruit has narrowed his choices down to Texas and Duke. Landing Coleman for next season would be huge, but it wouldn’t solve the Longhorns’ problems in the here and now.

Point guards are essentially on-court quarterbacks. Bringing the ball up the floor is only a fraction of their responsibilities. They direct traffic, start the offense, get the ball to whoever’s hot and settle things down when it’s all out of whack.

Against the Razorbacks, Smart said there were some second-half turnovers that were preventable. The guards need to be sturdier handling the ball, too, and keep opposing guards from getting into the paint with ease.

Smart said he gave a laminated card to his guards that listed 25 things point guards must do. “A lot of it has nothing to do with physical skill,” he said.

“When you play that position, there’s a higher level of expectations on you, typically from the coaching staff,” Smart said. “That’s just part of playing that spot. You have to embrace that if you truly want to be a point guard.”

It should be clear now how pivotal Isaiah Taylor and Javan Felix were playing together the last three seasons. Those two combined for 25 points and seven assists per game last season. Felix was a senior; Taylor was a junior who decided to go pro.

No combination of two current guards can match those numbers. Roach averages a team-high 2.8 assists per game, and Jones is next with 2.3. As a team, the Longhorns average only 11 assists per game, the lowest average in the Big 12.

Four Big 12 teams have at least one guard dishing out more than five assists per game. Iowa State’s Monte Morris is at 5.9.

Ball movement, or the lack thereof, will be a critical component of league play as defenses get tougher. That’s especially true in the second half of the round-robin schedule when opposing teams know what to expect.

In less than 10 days, Texas will open Big 12 play at Kansas State. The last time the Horns were there, Taylor rose up and hit a mammoth 3-pointer that helped ice the game. Afterward, Taylor crowed about how he wanted to take big shots at big moments.

They’ll go back to Manhattan with real question marks at that position on Dec. 30.

“I think we knew it would be a work in progress,” Smart said. “We knew there would be some ups and downs at that position early. So I guess from that standpoint, it’s not a surprise. As a coach, you always want things to be better than they are.”