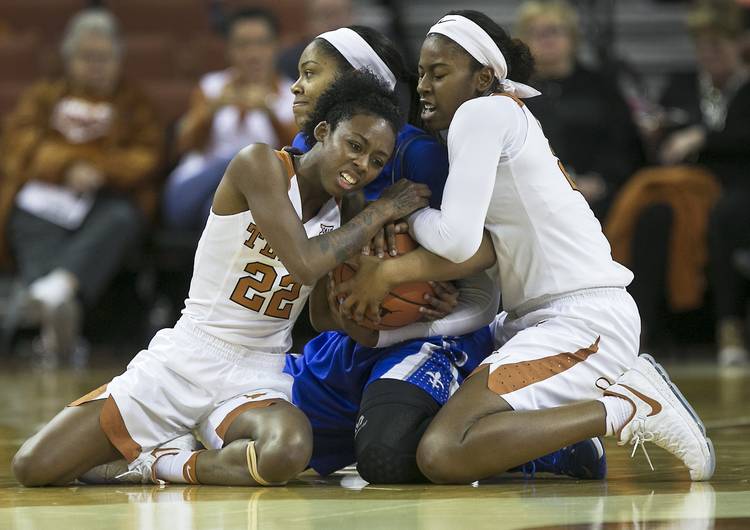 In front of 2,500 fans at the Erwin Center, senior center Kelsey Lang became the only player in the program’s 43-year history to take double-digit shots without missing a basket. She finished the night shooting 11 of 11, scoring a career-high 23 points as the 16th-ranked Longhorns cruised to an 80-48 win over New Orleans.

“I honestly didn’t know until after the game,” Lang said. “The announcer said, ‘the first time in school history …’ and I thought ‘For what?’ But it was a great feeling. I give credit to my teammates for giving me great passes.”

Lang did most of her damage in the first half, putting up 17 points thanks in part to well-executed assists from Joyner Holmes and Brianna Taylor. Her production slowed in a second half that felt like a mere formality, yet she remained perfect as the Longhorns (6-4) notched their fourth consecutive win and their third over a Southland Conference team this season.

“I told the team during several timeouts there was no reason we shouldn’t have been throwing Kelsey the ball every time,” said head coach Karen Aston. “She could have easily had 30 or 40 points tonight. She responds well when she thinks her role is important, and that’s what happened tonight.”

The Longhorns now enter an eight-day hiatus for winter break. Texas returns to action at home on Dec. 29 against Texas Tech (7-3), which will be the Longhorns’ Big 12 opener and the final game of a five-game homestand.

“About all we said in the locker room (after the game) was Merry Christmas,” Aston said. “They’re ready to go home and see their families. They understand what’s ahead of them and this is a chance for them to breathe a little bit.”

Texas crashed the boards hard, with 44 rebounds. The Privateers (4-5), outsized on the interior by Lang and Holmes, managed only 28. The Longhorns have now out-rebounded teams in all 10 games this season.

“We put a big emphasis on rebounding,” Aston said. “When we get into Big 12 play, it’s going to be extremely important. Kelsey and Joyner both understand how big of a deal it is, and it’s only going to become more critical.”

Lang wasn’t the only one who had big nights. Junior guard Brooke McCarty also reached a milestone, and Aston moved one step closer to one of her own.

McCarty moved into seventh place on Texas’ career three-pointers list with a three late in the first half. She added a second three in the third quarter to bring her career total to 126. She needs 23 more to tie Kim Lummus for sixth place. And Aston, now in her fifth season at Texas, is five wins away from her 100th with the Longhorns; she’s also four wins away from her 200th career victory.

Jewel Angelo was the lone offensive star for New Orleans, finishing with 17 points.

But the night was all about Lang, and how she managed to do something that no other UT player has been able to do in 1,393 previous games.

“I missed a lot of easy shots in the past few games,” she said. “I was just really focused on finishing tonight.”

One month in, Texas’ search for a clear-cut point guard continues