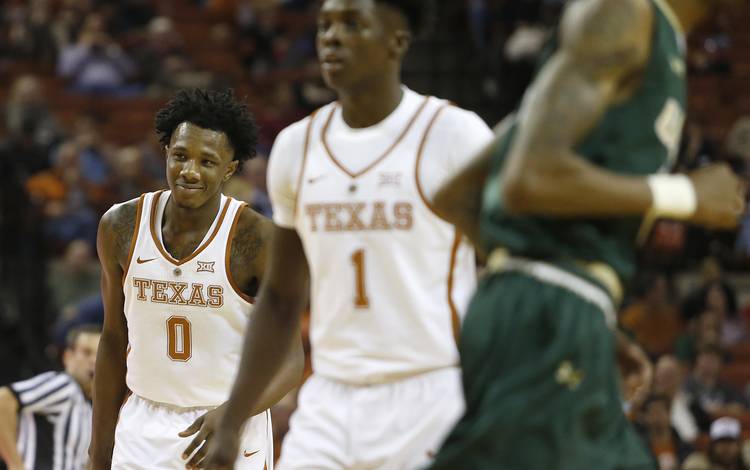 Texas coach Shaka Smart can talk about the process of winning until he’s blue. He can show his players endless clips of winning plays made by NBA stars or nameless journeymen.

But if the Longhorns can’t actually do it for themselves, basketball season becomes a long winter slog. “You have to live it, go through it,” Smart said.

The Longhorns were aggressive early on defense, scored in transition, made extra passes, drilled a dozen 3-pointers and went a perfect 12 for 12 at the free throw line. Overall, it was probably the best 40 minutes of the entire season.

The end result was a 96-60 blowout win over Alabama-Birmingham at the Erwin Center. Five players finished in double figures, with Tevin Mack (18 points) leading the way, as the Longhorns forced 18 turnovers via 11 steals.

“Faith is trust without evidence,” Smart said, “and when you have a level of faith that it’s going to work, you can just engross yourself in the process.”

Texas (6-5) will scatter for a few days for the Christmas break. For the record, guard Andrew Jones is hoping Santa brings him a new bike, “so I can get around campus,” he said. Forward Jarrett Allen would love some video games.

The Longhorns will practice again on Christmas night. Texas plays its final non-conference game on Tuesday against Kent State. The way things went against UAB (6-6), players should want to get back on the practice floor ASAP.

“We’re just working on getting better and really sharing the ball,” said Jones, who had 16 points, six assists and overcame three traveling turnovers in the first 4:11. “Once we did that, pushed the ball in transition, that’s what made our game look more fluent and effective.”

On Monday, Smart came out full guns blazing during a Q&A with reporters. Well, in his own way.  In retrospect, Smart said, “I’ve been saying ever since we started talking about this team that we needed to grow. I just added the word ‘up.’ What’s the difference? It’s semantics.”

Smart’s esoteric ways maybe hard for the typical 18- or 19-year-old to grasp at times. The last two days, Allen said, “He’s been normal. He hasn’t changed much.” The Horns got the message, though.

Just like in the Arkansas game, Texas went cold for a stretch and missed eight straight shots. This time, instead of getting bummed out, they fought back. Eric Davis Jr., the one player Smart’s been riding the hardest, hit back-to-back 3-pointers to kickstart a 10-0 run. Tevin Mack’s fast-break bucket just before the halftime buzzer gave Texas a 16-point lead.

Jones opened the second half with a nifty no-look pass to Allen for a bucket. Senior Kendal Yancy got into the act with a three-point play followed by a 3-pointer. Texas led by as much as 29 points with 12 minutes left.

“I don’t have a stat sheet but it felt like 25 3s that they made, and again, we didn’t show up ready to play for 40 minutes,” UAB coach Robert Ehsan said.

The Longhorns were actually just 12 for 29 from 3-point range, according to the final numbers. Jones had four, Mack hit three more as Texas finished with a season-high 41.4 percent beyond the arc.

For a team that experienced “disappointing” losses against UT-Arlington, Michigan and Arkansas, it needed a blowout win in the worst way imaginable.

“We needed to play better is what we needed,” Smart said. “I think we did. Any time you can win by a big margin like that, you don’t have the level of anxiety and tension that I think a lot of our guys have felt in certain other games earlier this year.”