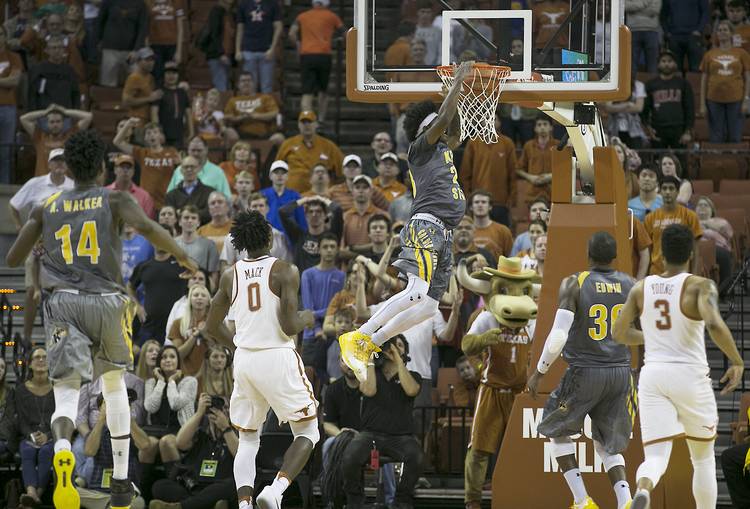 Kent State's Jaylin Walker dunks in the closing seconds of their upset victory over Texas on their home court in a non-conference basketball game Tuesday night December 27, 2016 at the Erwin Center winning 63-58. Walker led all scores taking over the game in the closing minutes. RALPH BARRERA/AMERICAN-STATESMAN

A team picked to finish third in the Big 12 Conference is simply not that good.

That’s the overwhelming takeaway from a 6-6 start capped by Tuesday’s clunker against Kent State. The Longhorns played one of their worst games of the year, still managed to hang around against a dogged Mid-American Conference foe but ultimately lost 63-58 at the Erwin Center.

Asked how this team could be sitting with a .500 record, Texas guard Kerwin Roach Jr. said, “I honestly don’t know.”

“Our preparation is fine. We just have to go out and execute,” he added. “I feel like leading up to this game, that we practiced hard. We just didn’t execute.”

It was just last week Texas had its best offensive game of the year — a 36-point rout over Alabama-Birmingham. That was before everyone scattered for the holidays. When the group reassembled, Texas shot 36 percent overall, made just two of 18 3-pointers and got blasted on the boards by 19.

Texas’ identity is unclear at this point. Friday’s Big 12 opener at Kansas State’s Bramlage Coliseum, a place nicknamed the “Octagon of Doom,” is merely days away. These young Longhorns will quickly discover the journey only gets tougher.

“There’s no question we’ve got to get better,” UT coach Shaka Smart said. “Now, the competition, the intensity, the want-to, all those things go up. This is for us, a real moment of, ‘OK, what are we really going to be about?’

“You’d sure would love to go into Friday with a level of momentum, but we don’t have that because we didn’t take care of business tonight.”

The first eight minutes of the game was awful. Texas scored only seven points and had five turnovers. Kent State (8-5) took a 10-7 lead when Desmond Ridenour took a gift from Jacob Young and raced the other way for a dunk.

Guard Andrew Jones had six of UT’s 18 turnovers. At one point, Kent State’s Deon Edwin ran right in front of Jones, swiped the ball and sprinted the other way for a jam. It happened so fast, everyone on the floor was momentarily frozen. All were stunned there was no whistle or anything. Kent State had 24 points off turnovers.

There were bad turnovers and mysterious decisions, too. After a timeout, the Horns ran a play designed to get Jarrett Allen a 3-pointer? He finished with a team-high 17 points on 7 of 13 shooting to go with 10 rebounds.

That wasn’t nearly as odd as seeing the 6-foot-11 Allen practically near the half-court line with less than 7 seconds left on the shot clock. That possession yielded nothing as Roach threw up a wild attempt as the shot clock expired.

Texas announced it had distributed 10,658 tickets, and a decent-sized crowd was on its feet during the seesaw closing stretch. Tevin Mack, UT’s leading scorer, was shutout of the scoring column until he got a layup to fall with 2:29 left. He finished with four points on 2 of 8 shooting.

Roach’s nifty pass to Allen for a dunk made it a one-point game with 1:19 remaining.

Kent State finally had a three-point lead on UT’s final possession. Eric Davis Jr. looked for a bucket off the baseline but got blocked with 6 seconds left. The Flashes went the other way, and Jaylin Walker (24 points) threw down a thunderous exclamation-point dunk.

“They could sense when our guys were frustrated,” Smart said. “When a team can sense that, they gain aggressiveness.”

Going forward, Big 12 teams usually scout the opposition harder. Players know each other’s tendencies from playing against them multiple times each year. The coaches have thick files on what the others like to do in certain situations. Nobody can hide.

Asked what he tells the other Texas guards, Roach said, “Next game, just bounce back. Just keep attacking and keep aggressive.”