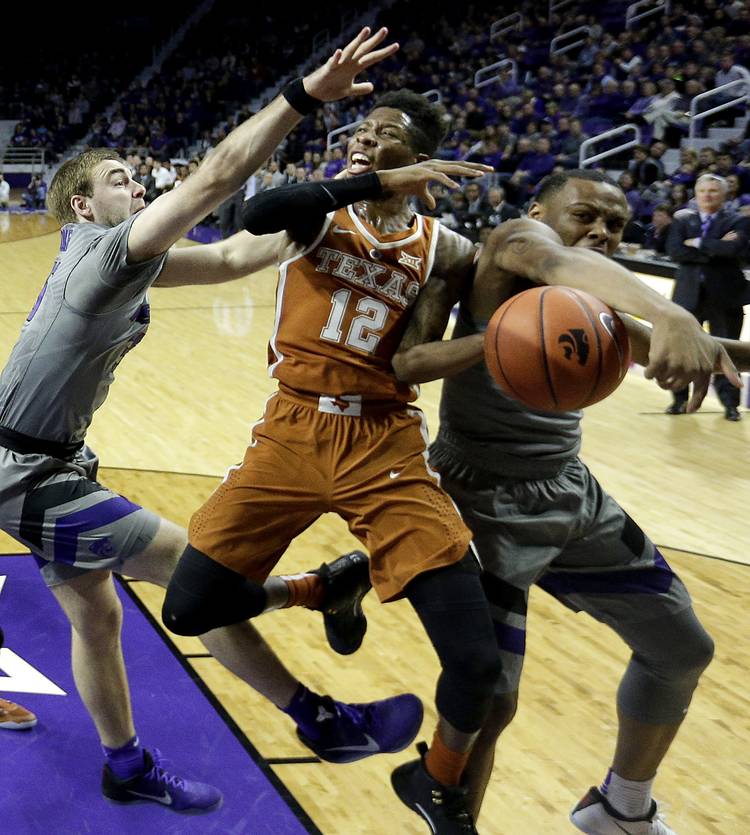 Texas guard Kerwin Roach Jr. (12) is pressured by Kansas State's Austin Budke, left, and Carlbe Ervin II, right, as he puts up a shot during the first half of an NCAA college basketball game Friday, Dec. 30, 2016, in Manhattan, Kan. (AP Photo/Charlie Riedel)

MANHATTAN, Kan. — Kansas State fans formed a purple-clothed conga line on the concourse Friday night just to get their photo taken with the Texas Bowl trophy.

They eventually settled into their seats inside Bramlage Coliseum to see K-State’s basketball team win yet another contest over someone from the Lone Star state.

The football team went 5-0 this season against Texas-based teams. Now, the Wildcats are off to a good start on the hardwood after dispatching the Longhorns in the Big 12 opener.

Texas pieced together another frantic finish before succumbing 65-62. But it was another night where the Horns did more damage to themselves than any kind of punishment the opponent dished out. It was a game full of little, self-inflicted mistakes that add up to a miserable night on the road.

“It’s just that hump. We’ve just got to get over it,” guard Kerwin Roach Jr. said. “Once we get over that hump, this team could do wonders.”

Freshman Jarrett Allen had 14 points, some coming on impressive pretzel-twisting moves, and a season-high 13 rebounds. It’s the third time in the last four games he’s put up a double-double. Shaq Cleare also scored 10 points, all coming before halftime.

But the Longhorns (6-7, 0-1 Big 12) went 8 minutes, 20 seconds during a painful first-half stretch without scoring a field goal. During that span, Texas watched an 11-4 lead morph into a 19-13 deficit. Coach Shaka Smart’s bunch spent the rest of the night fighting uphill.

“There’s a lot of little things that we’ll look at when we watch the tape that were under our control,” Smart said. “Our guys know what to do. We just have to get better at doing them at the right time and doing it together.”

It was an eight-minute stretch full of teachable moments. Eric Davis Jr. threw the ball away after K-State went to a half-court press. Tevin Mack missed an open layup after a perfect pass on an inbound play. Andrew Jones lost the ball, Cleare got called for a charge and there were two shot clock violations.

“They were playing great defense, and we just couldn’t get a bucket,” Allen said.

Complicating matters, Kendal Yancy suffered an ankle injury during a nasty spill with less than 11 minutes left in the first half. He got up grimacing but ultimately checked out two minutes later and watched the rest from the sideline.

On a night when Texas racked up 26 fouls, allowing K-State to hit 26 of 33 free throws, the Horns needed every body they could find.

“Trying to play defense, trying to slide, it was hard to do that,” said Yancy, who will be evaluated over the weekend. His status for Wednesday’s Big 12 home opener against Oklahoma State is unclear.

“We’ve got a group of guys that want to win,” he added. “They’re hurt, because they understand the hard work we put in practice every day. They’re young. They just have to keep playing more basketball games, and get a good feel of what it’s like playing in the Big 12.”

It was still a manageable game after halftime when K-State (12-1, 1-0) led by five. But Roach missed a jumper, and Allen got the board and brought the ball down. Instead of going right back up, Allen let K-State’s defenders get their hands in his kitchen and he got called for traveling.

Two possessions later, Jacob Young passed on an open corner 3-pointer, instead throwing the ball back to Davis, who turned it over. The next time down, Roach accidentally stepped on the baseline for anther turnover.

A five-point game quickly turned into a 10-point Wildcats lead. By that point, the only thing that got the crowd really revved up was seeing K-State football coach Bill Snyder on the video board. The legend stood up and blew kisses to the Wildcat faithful.

The Horns picked up the pace in the closing minutes and got back within three with 7 seconds left. K-State’s Kamau Stokes closed it out with two free throws. He went 9 for 10 from the line and had 15 points.

For Texas, there could be many more nights like this ahead.

“I’m not happy with the loss. I want to win in general, I’m a competitor,” Cleare said. “But my young group, I’m proud of them. We’ve just got to fight a little harder. We’ve got to be solid on defense and take care of the ball more.”