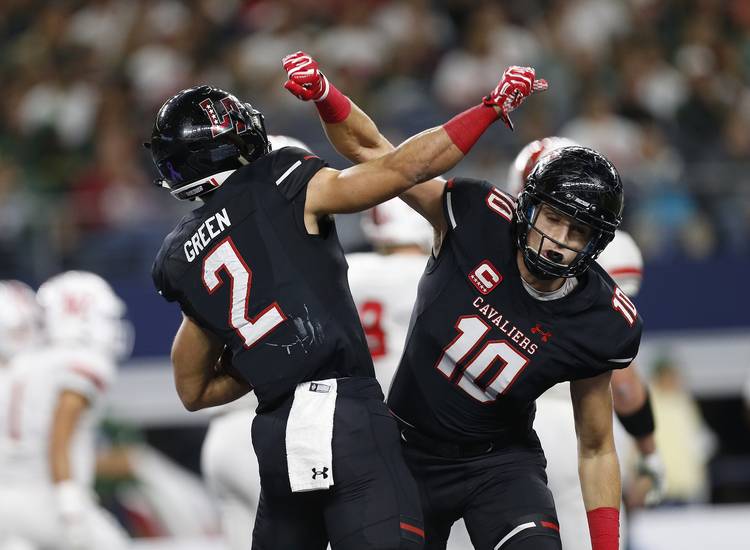 Lake Travis' Cade Green (2) and Cade Brewer(10) celebrate a touchdown against The Woodlands during the Class 6A, Division I state championship at AT&T Stadium in Arlington, Saturday, Dec. 17, 2016. (Stephen Spillman / for American-Statesman)

Tom Herman inherits a Texas roster full of potential. With around 65 scholarship players expected to return for the 2017 season, the Longhorns’ new head coach won’t have massive numbers to operate with in his first official cycle in recruiting. His first job is to recruit the players that are already on campus and secure the immediate future.

Charlie Strong left him a strong base for the 2017 class, and Herman wasted little time adding new names on the offensive side. Attrition is always expected when a new regime takes over; Herman likely has about 20 scholarships to play with, and Texas sits at 12 commitments.

Here’s where Texas’ offense is at. Players are as classified for 2016.

Youth dominates the depth chart at quarterback. Herman does inherit experience with Buechele, who started all 12 games as a true freshman. Buechele played well in his first season, even when dealing with injuries near the end. He finished with nearly 3,000 passing yards and 21 touchdowns, with 11 interceptions. He excelled throwing the deep ball and showed consistency, completing 60.4 percent of his passes. Tyrone Swoopes is gone and Jerrod Heard is now a wide receiver. That means a lot of pressure will be placed on Ehlinger.

Texas fans are now familiar with Ehlinger. The Westlake quarterback committed before the 2015 season. He enjoyed an historic junior season, setting school records en route to a state championship game appearance. But his senior year was filled with road bumps and injuries. Still, Ehlinger will be an early enrollee and will be on campus for spring practice. That same advantage helped Buechele become a first-year starter.

It could be argued that Texas would be best served looking for a transfer quarterback or a junior college option to help with depth. It’s likely Buechele and then the true freshman heading into the 2017 season. But both Buechele and Ehlinger possess the talent to lead a program. That makes it hard, and maybe even unnecessary, to search for an older backup; Merrick is no slouch and Heard could be moved back from receiver in a pinch. Herman used a running quarterback while at Houston.

It’s nearly impossible to expect the same production from the running back position with D’Onta Foreman off to the NFL. But that doesn’t mean the cupboard is bare. Warren’s sophomore season was stunted by injury, but he was expected to be the second piece to Texas’ rushing attack. His absence meant more time for Porter, who showed flashes as a freshman but nothing to suggest Warren won’t be the main force in the backfield if he’s healthy. The Longhorns would like to get some production from Bernard or Johnson, but if not, reinforcements are on the way in the 2017 recruiting class.

Herman has wasted little time building backfield depth. Since he was hired, he’s gained commitments from Carter and Young. Carter is an intriguing prospect with big-play ability. Some drama in his recruitment to Georgia led to his decommitment, and it was the Longhorns who benefited when the four-star prospect flipped his pledge. He has 10.87 speed in the 100 and hopes to enroll early. Young is an underrated prospect from Spring, and Herman was familiar with him from his time at UH. Young, who also has elite 100-meter speed, is a tough runner with quick feet and solid vision.

Texas may be done recruiting the position, but don’t count out Wylie East’s Eno Benjamin. Herman recruited the four-star back hard when he was at Houston, and Benjamin is still showing some interest in the Longhorns.

Texas isn’t lacking for bodies at wide receiver. Top targets like Foreman, Duvernay, Oliver and Heard are expected back for 2017. Those guys built chemistry with Buechele and that should only grow with another year together. Duvernay and Johnson started to emerge over the last third of the season and should be expected to compete for starting spots this spring. Add in potential stars like Humphrey and Hemphill-Mapps and this position might be the best, on paper, that Herman inherits on the offensive side of the ball.

It’s still necessary to add players here. Miller is a four-star prospect, and at 6-2, 170, his length and athleticism made him a nightmare to guard at the high school level. He high-points the ball with ease and can score any time he touches the ball. Estell is listed as an athlete who could end up playing defense, but his fastest route to playing time is at receiver. He shares a similar frame and skillset with Miller.

The wide receiver position is loaded in this state for this recruiting cycle. There are no fewer than 10 legitimate four-star talents and Herman likely will continue to pursue a few of them, even if they’re committed to other schools. Richmond Foster’s Cede Lamb, who’s pledged to Oklahoma, is the best of the bunch and should remain a priority. Other names to watch are Charleston Rambo, Camron Buckley and Omar Manning.

It’ll be interesting to watch how Herman uses tight ends early in his Texas tenure. It’s not a position used much in the air-raid, so Texas’ recruiting at the position lagged behind in the past two cycles and the scholarship numbers there are low. There’s some talent on the roster, but it’s clear that Herman wants to add more tight ends. Lake Travis’ Brewer (6-3, 218) is a catch-first tight end with the frame to add weight; he’ll need to become a better blocker at the point of attack,  but will be a mismatch for linebackers and safeties in the passing game. Leitao is relatively new to football, having focused more on basketball in his prep career. Still, at 6-4 and 235, he possesses the ideal frame for an on-line tight end, with Brewer able to play H-back at times.

The biggest difference between the roster that Herman inherited and the one that Strong inherited three years ago is the talent along the offensive line. Strong has left the cupboard full of current and future all-conference players. Guys like Williams, Vahe and Shackelford should give Herman’s offense a nucleus to build around. Williams is a future first-round NFL draft pick as one of the best left tackles in the country. This unit looks promising for 2017 and the next few years. It’s Herman’s job to add a few more pieces to the puzzle for the future.

He landed his first big fish in Kerstetter, who was committed to Oklahoma State before Herman flipped him around Christmas. Kerstetter (6-5, 280) is a big tackle who could play guard down the road if needed. Another San Antonio prospect to watch is San Antonio Jay’s Matthew Huhn, who recently decommitted from Houston. He holds offers from other schools, but his familiarity with Herman makes him a viable candidate for a late look from Texas. Another name to watch is Denton’s Grant Polley, who’s committed to Colorado.

The American-Statesman’s Fabulous 55: Our winter update offers a new No. 1