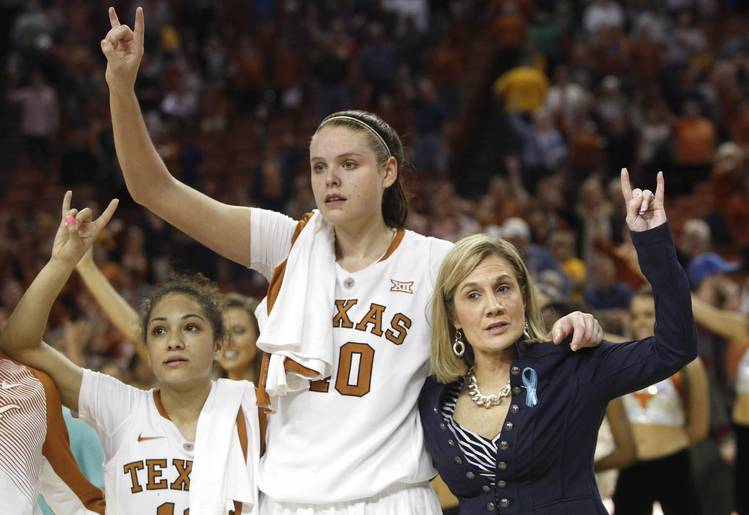 Texas' Brooke McCarty(11) and Kelsey Lang(40) stand with head coach Karen Aston after a victory at the Erwin Center. (Stephen Spillman for AMERICAN-STATESMAN)

Perhaps it’s no coincidence Texas is playing its best basketball of the season at the same time Kelsey Lang is playing the best of her career.

The 15th-ranked Longhorns have won six straight games, and the 6-5 senior is largely responsible. No longer in the shadows of 6-7 Imani Boyette, Lang has blossomed into one of the Big 12’s best post players.

Lang has contributed double-figures in rebounds in seven of her last eight games and ranks fourth in the conference with an average of 8.8 boards per game. She’s tied for the Big 12 lead — with Oklahoma State’s Kaylee Jensen — with six double-doubles.

Lang also ranks seventh in the conference with a field goal percentage of .586, and third with 2.3 blocked shots a game.

“Without Imani getting all the rebounds, someone had to fill that spot,” Lang said Tuesday. “Coach (Karen Aston) said before the season we might need multiple players to do it.”

Aston said Lang has made significant improvement since last season. Last year got off to a rocky start after she had surgery on the fourth metacarpal below the ring finger of her left hand before the opener.

Boyette was in the midst of her best season at Texas (11.3 points a game, 8.9 rebounds, 2.9 blocks) and Lang was reduced to a complementary player. Lang was “tentative” in the frontcourt after returning from the injury and “lost her confidence” until she was completely healed, Aston said.

Lang struggled for most of the year, finishing with 6.5 points and 4.5 rebounds a game.

“Being that she’s a senior now, she’s playing with a bigger sense of responsibility,” Aston said. “She sees the finality of (her college) career and she is playing with more urgency.”

Before the season, Aston said Texas would be challenged under the boards without Boyette. The Longhorns, though, have been outstanding, ranking fifth in the nation (out of 344 teams) in rebounding margin (12.8 per game). Freshman Joyner Holmes has been vital, grabbing 6.7 rebounds a game.

Texas (8-4, 2-0) had outrebounded its first 11 opponents before Sunday’s game at Iowa State. The Longhorns pulled out a 75-68 victory over the Cyclones despite losing the battle of the boards 36-34.

That has been a minor blip on the UT’s radar during this six-game winning streak; the Longhorns have outscored their last six foes by an average of 19 points a game.

Aston noted multiple reasons for the team’s improvement. First-year players such as Holmes, guard Alecia Sutton and forward Jada Underwood have improved defensively. Guards are “making better decisions with the ball” and UT’s bench has played a vital part.

No matter what happens this year, Lang’s basketball career will not be over. Now a vocal team leader, she aspires to play in the WNBA and hopes to play professionally overseas.

Texas’ missing ingredient: Why are the Horns lacking a true point guard?