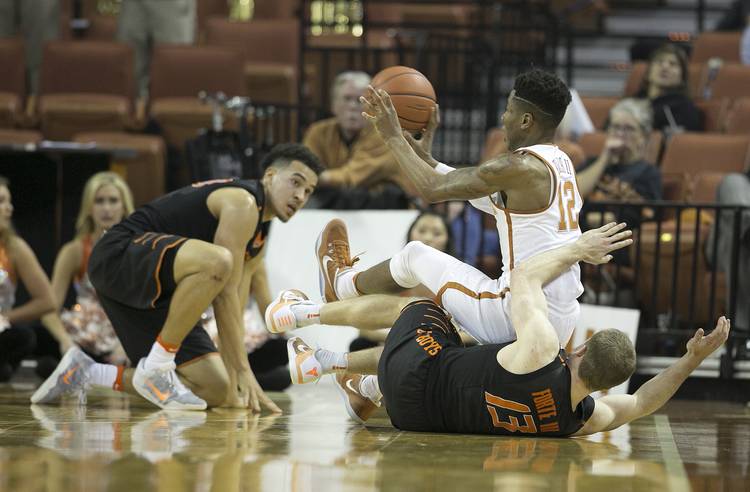 On paper, this was how it was supposed to look all along.

When coach Shaka Smart laid out his plan for the season, his three sophomores would become a Texas triumvirate capable of catapulting the Longhorns into Big 12 title contention.

At times, Tevin Mack, Eric Davis Jr. and Kerwin Roach Jr. have all rotated roles in their own version of “The Good, the Bad and the Ugly.”

On Wednesday against Oklahoma State, things finally clicked. Mack had a career-high 27 points, Davis tied his season high with 16 and Roach had six assists in a critical 82-79 win over the Cowboys at the Erwin Center.

“This was the first time all three sophomores have really played at a high level,” a relieved Smart said. “And we needed that.”

There are a lot of ifs associated with this bunch — if Texas can get better guard play, if Jarrett Allen can keep improving, if the sophomore surge continues, etc. The Longhorns (7-7, 1-1 Big 12) have their offensive problems, no doubt. But it seems ridiculous to give up on this group less than a week into 2017.

“Stay positive, trust in the process and keep putting extra work in,” Davis said, who was speaking about his own game but could’ve easily been referencing the whole shebang. “That’s all I can do.”

Sometimes, teams need a break. That’s certainly how it looked early on when Oklahoma State (10-4, 0-2) was called for seven fouls less than four minutes after tipoff. “First time it’s ever happened to me,” first-year OSU coach Brad Underwood said. “But we’ve been fouling a lot.”

Underwood said those fouls set the tone for the entire night. The Longhorns had a season-high 33 free throw attempts. Andrew Jones, who didn’t have a single turnover in 28 minutes, was 6 for 10 at the stripe. Allen and Shaq Cleare were a perfect 8 for 8 combined.

“We knew from that moment on that we could just go and be real aggressive,” Mack said. “Not settle for threes, just attack the paint strong. It made a big difference early on in the game.”

Ray Natili, the lead official Wednesday night, was part of the three-man crew that missed an obvious traveling violation at the end of Tuesday’s Kansas State-Kansas game. The no-call, something the league office would not publicly acknowledge, helped the Jayhawks escape on a last-second shot.

There were a bunch of steps required for this Texas victory, too.

Mack kept the Horns in it with two 3-pointers just before halftime. Then after the break, the 6-foot-7 swingman sparked a 15-0 run with a flurry of fast-break layups that gave Texas a 61-50 lead. He may have talked some smack along the way. “Yeah, I was,” Mack said.

The Cowboys pulled within four, but Davis scored on a nifty left-handed layup with 5:32 remaining, giving himself a shot of much-needed confidence. On the next two possessions, Davis drained 3-pointers in heat-check fashion.

Meanwhile, Roach kept tabs on OSU’s sensational point guard Jawun Evans. The Dallas Kimball standout had 19 points for the Cowboys, but Evans also turned it over five times in 29 minutes.

“Just hearing about Jawun, they call him the best point guard in our league,” Roach said. “We had four days to prepare for him, and that’s all they talked about. So we just really put it in front of our minds and executed.”

Said Smart of Roach, “Snoop was as important as anyone on the floor. He only shot three times, but he got to the foul line. He created and really played good defense on one of the better players in the league.”

This appears to be the key going forward. Texas needs all three of these players at a high level every night. Allen will get a lot of attention inside, and defenders will try to rattle Jones. It’s the three sophomores that need to step up and lead the Longhorns.

“This is what we envisioned,” Davis said. “We wanted this opportunity. We just want to keep it going.”

A clean slate and a fresh start for Jordan Spieth