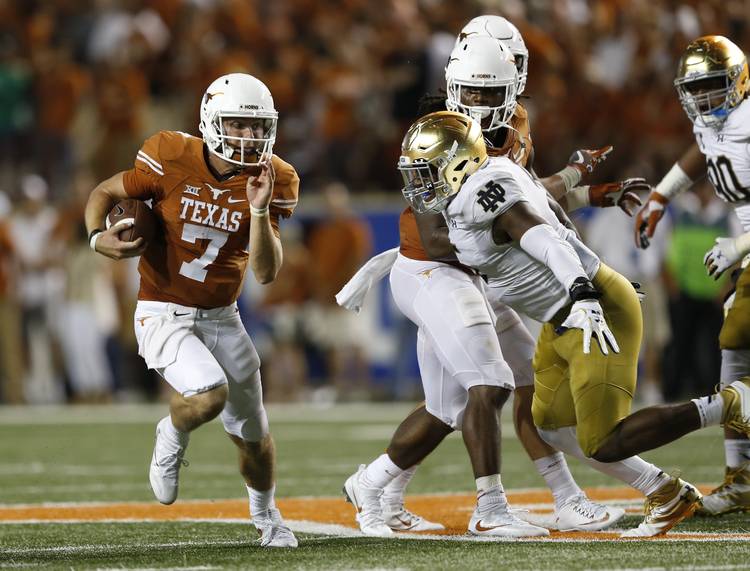 On Thursday, Texas football coach Tom Herman described his offense as an up-tempo, pro-spread attack that will operate out of the shotgun.

He declined to label the offense “Tom Herman’s offense” or a “Tim Beck’s offense.” (Beck, an ex-assistant at Ohio State, was hired as Texas’ offensive coordinator earlier this week). Since Herman and Beck both had quarterbacks that could run this past season at Houston and Ohio State, though, that may give Texas fans a hint of what to expect.

So where does that leave Shane Buechele?

The rising sophomore threw 21 touchdown passes in his debut season, and his 2,958 passing yards set a freshman-year school record. Buechele, however, compiled only 161 yards and two touchdowns over 96 rushing attempts, and his longest run was a 23-yard jaunt against West Virginia. Backup quarterback Tyrone Swoopes rushed for seven touchdowns in a complementary role.

Herman, though, said he believed the 6-1, 191-pound Buechele has the ability to find success in Texas’ new offense.

“For our offense to work, you don’t have to be (former Ohio State standout) Braxton Miller or Michael Vick,” Herman said. “You have to at least make the defense pay if they ignore the quarterback in the run game. You don’t have to hit home runs. As long as you’re hitting singles and doubles, then you’re going to have success in this offense.”

Herman told reporters on Thursday he had not watched any of Texas’ game film, although his assistants had. Texas is expected to retain 37 scholarship players on offense and 31 scholarship players on defense, but Herman insisted he was not inheriting any starters. Herman stated the program was a meritocracy and the Longhorns would have to earn their playing time.

For Buechele, that will mean competing with two other scholarship quarterbacks for snaps. Westlake senior Sam Ehlinger is a four-star recruit who will enroll early and join the Longhorns this month, and Matthew Merrick will be a sophomore this fall.

Versatility leads Baron Browning to No. 1 in Statesman’s Fab 55