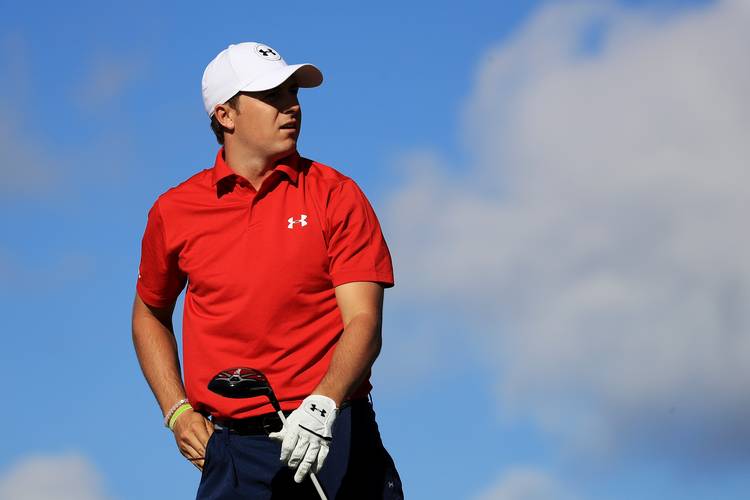 LAHAINA, HI - JANUARY 04: Jordan Spieth of the United States plays his shot from the 14th tee during the pro-am prior to the SBS Tournament of Champions at the Plantation Course at Kapalua Golf Club on January 4, 2017 in Lahaina, Hawaii. (Photo by Sam Greenwood/Getty Images)

KAPALUA, Hawaii  — Three victories around the world. A chance to win another major. A Ryder Cup victory. Jordan Spieth had every reason to celebrate his year.

Part of him, however, couldn’t wait for it to end.

“I was happy when the ball touched down and 2017 started,” Spieth said Wednesday.

He wasn’t the least bit bothered by what he achieved last year, especially a pair of PGA Tour victories that ran his total to eight before he turned 23. He just knew he faced endless comparisons with the year before, and even matching that was going to be close to impossible.

Spieth was coming off the best season in golf over the last 40 years by anyone not named Tiger Woods. His five victories included the Masters and U.S. Open and as close as anyone has come to the modern Grand Slam. He capped it off with a FedEx Cup title and all the big awards.

And it didn’t help when he started the next year with an eight-shot victory in Kapalua.

“Off of this week last year, it didn’t necessarily help my own and anyone else’s expectations, given the performance that we had,” Spieth said. “But I also knew that wasn’t realistic to continue to do. It’s also a 30-something event … which makes your chances of winning significantly higher, even though it is a world-class field.

“But I learned a lot on both end of things, highs and lows, which I didn’t really have many lows in 2015,” he said. “I think I can use that to my advantage.”

One bad swing on the 12th hole at Augusta National could have changed that. Spieth lost a five-shot lead on the back nine of the Masters and never caught up, and then he never had much of a chance.

But consider his outlook a year ago.

Asked what he would consider a good season, Spieth at first joked, “Last year.” He’s not one to be specific about goals, though he did mention giving himself a serious chance in a couple of majors and closing out individual events. He had a chance in one major. He closed out victories at Kapalua, Colonial and the Australian Open. The Masters was the only tournament he had a chance to close out and let get away.

Not a bad year. Just not like the previous year.

And now, 2015 is far enough in the past that it’s easier to look forward. Another reminder is the world ranking. Even with three victories and a runner-up in a major, Spieth went from No. 1 to No. 5.

It starts on a Plantation Course that is far different from a year ago, when Spieth became only the second player in PGA Tour history to finish 72 holes in 30-under par or lower. It was dry with light wind throughout the week. This year, nearly two months of rainy weather makes has made the fairways lush. More rain this past weekend made it so soggy that instead of balls running down the fairways, tee shots were backing up from pitch marks.

That would seem to be more suited to U.S. Open champion Dustin Johnson, who will be paired with Spieth in the opening round.

Then again, length has nothing to do with why Spieth loves it here. In his only other appearance in 2014, he was in a three-way tie for the lead going into the final round and finished one shot behind Zach Johnson.

“I think this course, a lot like Augusta National, a few other ones, with the amount of slope and uneven lies and the amount of imagination you need in approach shots and on and around the greens, it brings out more the feel side of my game,” Spieth said. “More kind of the quick-twitch, reactionary-type golf that I just love playing and I feel like is my DNA, my golf DNA. So that’s why I feel like I’ve had success.

“When your swing isn’t a driving range swing other than tee balls, I tend to hit the ball better than I do if it’s just a dead-flat golf course,” he said. “I don’t know necessarily why. I think it’s just the strength of mind to be able to adapt my swing to different lies.”

Spieth has played only twice since the Ryder Cup, winning the Australian Open and tying for sixth in the Hero World Challenge.

Jason Day, the world’s No. 1 player, last played Sept. 23 at the Tour Championship. Dustin Johnson played only twice since the Ryder Cup. Everyone gets a chance to see where their game is against a 32-man field in paradise.

Versatility leads Baron Browning to No. 1 in Statesman’s Fab 55