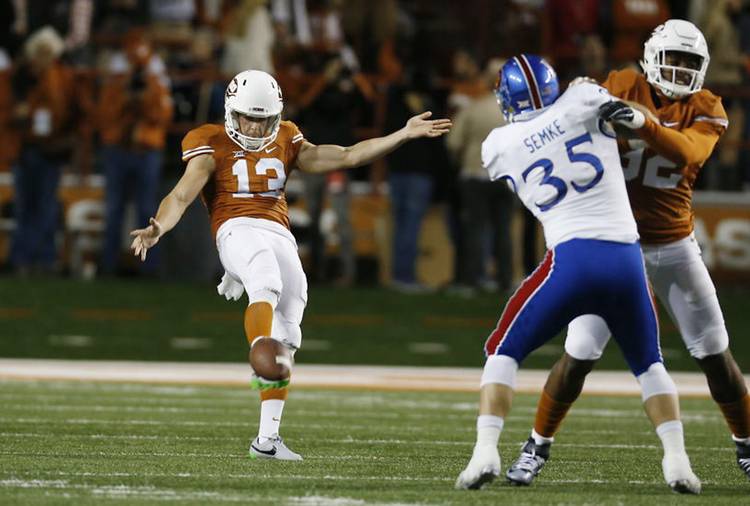 Texass #13 Michael Dickson punts during the first quarter of the Texas vs University of Kansas game Saturday November 7, 2015. Rodolfo Gonzalez/American-Statesman.

As Texas’ head football coach, Tom Herman said it was his job to “coach coaches” instead of position players. He will spend some time with punter Michael Dickson, though.

Herman told media members on Thursday that he will be responsible for Dickson and Texas’ punt team this season. Dickson is coming off a sophomore season in which he averaged a school-record 47.4 yards per punt and was a finalist for the Ray Guy award.

The other aspects of the special teams unit — kickoffs, kick and punt returns and place-kicking — will be guided by Craig Naivar, the Longhorns’ new safeties coach who was an assistant under Herman this past season at Houston. Herman added that Naiver will receive assistance from the other assistant coaches.

“This isn’t the NFL. We’ve got to have all hands on deck during special teams periods,” Herman said.

Aside from Dickson, special teams was an adventure during Charlie Strong’s final season as the Longhorns struggled on various attempts of field goals and extra points. Kickoff returns were also a liability for Texas, and the program last returned a kickoff for a touchdown in 2012. The last punt that Texas took back for a touchdown? That was scored by Daje Johnson in the second game of the 2015 season.

To help turn around Texas’ fortunes on special teams, Herman will turn to a coach he has worked with at Houston, Rice, Texas State and Sam Houston State. Naivar, who hails from nearby Taylor, has formerly been a special teams coordinator at Kentucky, Rice, Sam Houston State, Southern Illinois and Hardin-Simmons.

“Craig’s got an extensive background in special teams,” Herman said. “He’ll be really, really important as we progress here to make sure that (our special teams are) some of the best in the country.”