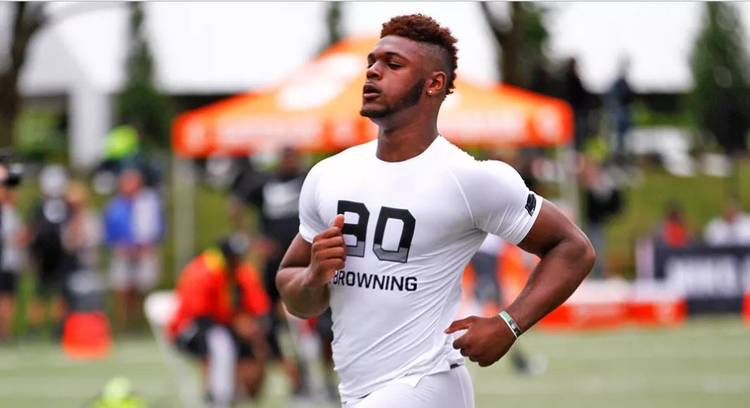 SAN ANTONIO — Baron Browning didn’t see it as a choice. Kennedale needed him to play cornerback, so the Ohio State commitment played cornerback, even though he’s a linebacker by trade. That versatility made him the choice for the No. 1 player in the American-Statesman’s recently updated Fabulous 55 list of the state’s top recruits.

Not that Browning cares all that much.

“I’m focused on being the best I can be,” said the five-star outside linebacker after Tuesday’s U.S. Army All-American Bowl practice. The No. 9 overall prospect in the country, per 247Sports’ composite rankings, is more concerned with his next steps. “I’m not really concerned with rankings heading into college because it won’t matter once we get there.”

All-Star games are about the experience as much as the competition. This is something Browning embraced early in his meteoric rise to the top of the Class of 2017 rankings. He’s grown accustomed to top talent at The Opening and other invite-only camps that take place in the summers.

Browning is used to the stage, and the expectations. He deals with it by keeping it simple.

“I’ve competed against some of these guys for years at various camps. It is like a reunion for us,” he said. “We all know we’re good, so it is a friendly competition. If I win or lose a rep, it’s all love. We’re here to have fun and improve. After the reps, we’re going to chat it up and have fun and try to get them on the next rep.”

The 6-3, 230-pound outside linebacker checks all the boxes. Browning is powerful at the point of attack, can run sideline to sideline and covers in space. He wants to be the complete package.

“I’m not for sure exactly what position I’ll play at Ohio State,” Browning said. “My versatility in high school showed I’m not just a linebacker. I can be a utility player. I played safety. I played corner. I played all three of the linebacker positions. I can play defensive end or run sideline to sideline. It’s really about doing whatever can get you on the field and help the team win.”

Soon, those fields won’t be in the state of Texas. Browning warns that location shouldn’t be a deciding factor.

“It wasn’t tough to leave the state because I’ve been here for so long. I’m going to go out and get experiences,” he said. “Being around different people and different situations and experiencing different was something I wanted. I fell in love with Ohio State. To be honest with you, when you’re picking the right school you shouldn’t think about the state. It’s about finding the right fit for you and that could be in or out of the state.”

RELATED: The American-Statesman’s Fabulous 55: Our winter update offers a new No. 1

A clean slate and a fresh start for Jordan Spieth