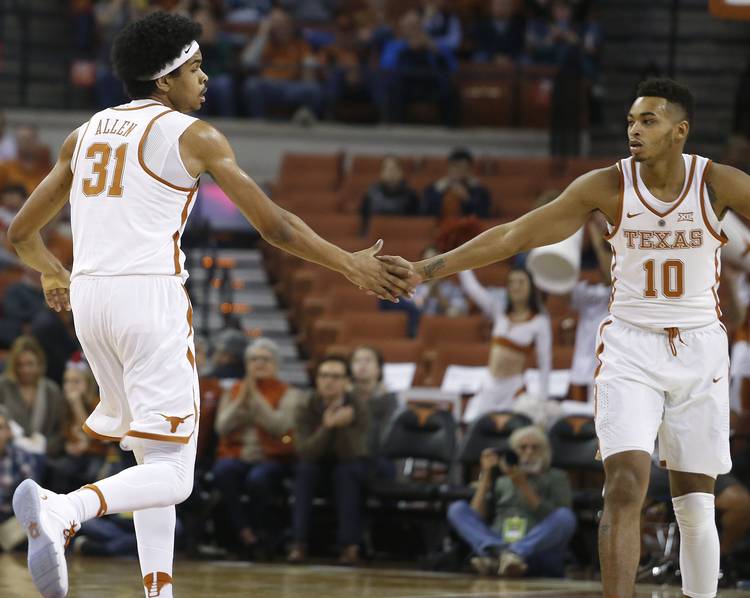 The high temperature on Saturday in Ames, Iowa is projected to be 19 degrees.

In preparation for the road trip to Iowa State, pack warm, Longhorns. Just don’t forget to bring Eric Davis Jr., who may be thawing out himself.

Davis drifted into a deep freeze this season after averaging 11 points in Texas’ first three games. He went 1 for 6 from 3-point range against Colorado and 0 for 8 overall against UT-Arlington. A 16-point flurry against Long Beach State was followed by another 0-fer against Arkansas.

At one point against the Razorbacks, Davis was pulled from the game and coach Shaka Smart unloaded on the 6-3 sophomore for his bad body language. “He needs to stop feeling sorry for himself,” Smart said the following week.

Davis wasn’t crowing about his 16 points on Wednesday against Oklahoma State. But he clearly looked like a player that’s still in the fight. Texas (7-7, 1-1 Big 12) needs him.

“Just seeing the ball go through the hole is a good feeling,” Davis said after the 82-79 win over the Cowboys. “That extra work finally paid off. Tomorrow at practice, I’m going to get my extra work in and stay positive.”

Smart has said repeatedly that if players can “focus on what goes into winning,” the tide will turn. That means players cannot be worried about their individual statistics. They can’t worry about playing time. Smart wants each man to ask whether he is truly helping the team overall.

It’s understandable that Davis drifted into a funk when his shot stopped falling. The shooting guard from Saginaw, Mich., had high hopes this season and wanted to be one of the team’s top scorers and leaders. It’s still possible.

The first two Big 12 games have highlighted the importance of having at least four scorers contribute.

Jarrett Allen had 14 points, Cleare and Kerwin Roach Jr. each added 10 more against Kansas State. But it wasn’t enough. Tevin Mack was 4-of-13 shooting, and the Horns were 5 for 18 overall from 3-point range in a 65-62 loss.

Compare that performance to what happened against Oklahoma State. Mack had a career-high 27 points, many coming on transition layups and dribble drives. Davis, Roach and Andrew Jones all finished in double figures as the Horns had a solid game offensively.

Four teams are averaging more than 75 points in two conference games. West Virginia is off to a torrid start as well, hitting 51 percent of its shots in a 2-0 start.

Iowa State (9-4, 1-1) almost pulled off the upset at No. 2 Baylor on Wednesday. The Cyclones have the best on-ball defense in the league, as teams are shooting just 37 percent against them.

Texas’ freshmen better bring earplugs, too. Hilton Coliseum is known for having the saltiest student section in the Big 12.