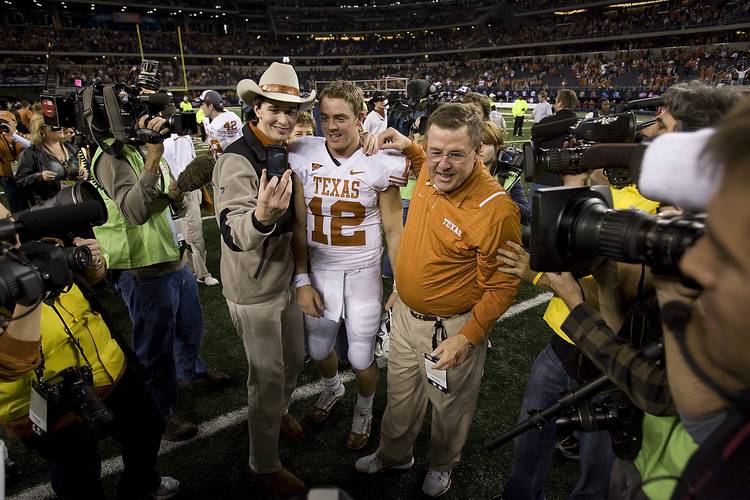 Former Texas offensive coordinator Greg Davis had plenty to smile about with quarterback Colt McCoy after winning the 2009 Big 12 championship, a victory that propelled UT into the BCS championship game against Alabama. Ralph Barrera/American-Statesman staff

As North Carolina started winning more games, Mack Brown remembers he started to feel overloaded. That’s why prior to the 1996 season, the Tar Heels coach turned his offense over to Greg Davis.

“He was a guy that I knew understood football, and I could trust him,” Brown said on Friday in a phone interview from Tampa, Fla.

Their partnership led to back-to-back 10-win seasons in Chapel Hill, and together they had even greater success at Texas. Davis served as UT’s offensive coordinator and play-caller for 13 of Brown’s 16 seasons, reaching two national championship games and watching scores of players set dizzying statistics along the way.

Davis announced on Friday he was retiring after four decades of coaching football. The native Texan spent the last five seasons at Iowa, capping a career that included stops at his hometown high school Port Neches-Groves, Texas A&M, Tulane, Arkansas and Georgia.

“I’m 65, and I’ve done it for 43 years. I’ve loved it for 43 years. It’s just time,” Davis told the American-Statesman. Greg and his wife Patsy plan on settling in Dallas in a house just two miles from his daughter, son-in-law and three grandchildren. Davis has two more grandchildren living in New Orleans with his son’s family.

“It’s been an unbelievable ride. I’ve had a great time doing what I love,” Davis said. “Not many people get paid for doing what they enjoy, and I did.”

Despite a long career full of winning and losing, Davis may be best remembered for his time with the Longhorns. The 2005 national championship team still holds the school record with averages of 50.2 points and 512.1 yards per game. For six consecutive years during that time, Texas averaged better than 6 yards per play.

From Ricky Williams in the I-formation to Vince Young and Colt McCoy running the zone read, Davis orchestrated a complete assault on the UT offensive record book, setting plenty of marks that still haven’t been broken. And yes, often times doing it one frustrating 3-yard hitch at a time.

Davis also was in charge of the graduate assistants in 1998. He ultimately signed off on the hiring of then-unknown Tom Herman as a GA in 1999. Herman considers Davis a mentor and said Davis guided him through multiple coaching moves on the road back to becoming UT’s head coach in November.

What Brown will remember was Davis’ work ethic. “He would stay over there all hours of the night trying to find a way to make first down,” Brown said.

“To stay as a head coach at Texas for 16 years is a difficult thing to do,” Brown said. “I’d say it’s even tougher to stay as a play-caller at Texas for 13 of those 16 years. And he also loves the University of Texas.

Williams still holds the school record with 2,124 rushing yards in Davis’ first season at UT during his Heisman Trophy-winning season in 1998. In 2002, Chris Simms set a new school record with 26 touchdowns, a mark that’s been surpassed four times. Cedric Benson helped the Longhorns finish second nationally in rushing offense in 2004.

“Thirteen years at the University of Texas is a pretty good run,” Davis said. “The guys that I got to coach and the teams that I got to be around … I’ll remember the people. Obviously, the ’05 season was special. So was the ’09 season. It was a lot of fun, but you ask me what I remember, it’s the people.”

Davis won the Broyles Award as the nation’s best assistant in 2005 and was a finalist again in 2009 when UT played Alabama for the national title. He left UT after the 2010 season and sat out in 2011. Davis joined the Hawkeyes in 2012 and helped coach Kirk Ferentz win 20 games the last two seasons.

All told, Davis coached in 22 bowl games during his career. Through four decades, Davis said all he wanted to do was “give our guys a chance to win.”

“Listen, that’s all coaching is,” Davis said. “It’s trying to give your guys the best opportunity to win. I have nothing but great feelings in Austin, the Longhorns and my time there.”