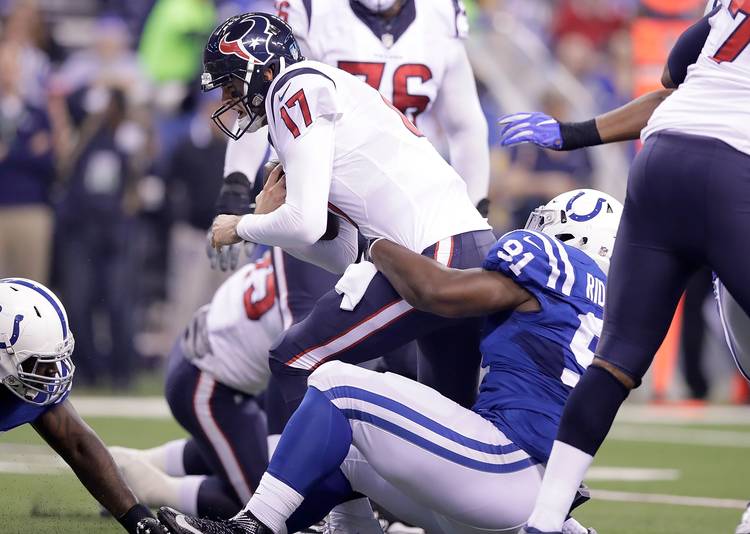 Brock Osweiler #17 of the Houston Texans is sacked by Hassan Ridgeway #91 of the Indianapolis Colts during the first quarter of the game at Lucas Oil Stadium on December 11, 2016 in Indianapolis, Indiana. (Photo by Andy Lyons/Getty Images)

Once known as DBU, the University of Texas looked more like LBU for the 2016 NFL season.

Three linebackers stole the show, slotting near the top of the American-Statesman’s sixth annual Ranking The NFL Longhorns project.

One snapped the two-year reign of our previous standout who topped our list with a high-impact season that earned him his fourth Pro Bowl trip. Notching 10.5 sacks — 13th best in the NFL — he added 16 quarterback hurries.

A holdover from the Longhorns’ last national championship team earned our No. 5 spot.

In his fifth year and playing for a new team, another ex-Longhorn enjoyed a breakout year and surged from 16th to sixth on our list.

Injuries cut down a number of NFL Longhorns, a drop of 36 players in 2015 to 31 in 2016, most notably Jamaal Charles. The Chiefs running back, the NFL’s all-time leader in yards per carry average (5.5), barely got warmed up in 2016 before being shut down. He never fully recovered from a torn ACL in his left knee suffered early in the 2015 season.

And last, one ex-Longhorn was clearly the best at his craft in the entire league.

Here we present our ranking of the 31 Longhorns in the NFL in two parts, starting with Nos. 31 to 16:

The Statesman's rankings of the former Texas Longhorns in the NFL for 2016, part 1.

U.S. Army All-American Bowl: The state will be well-represented on Saturday