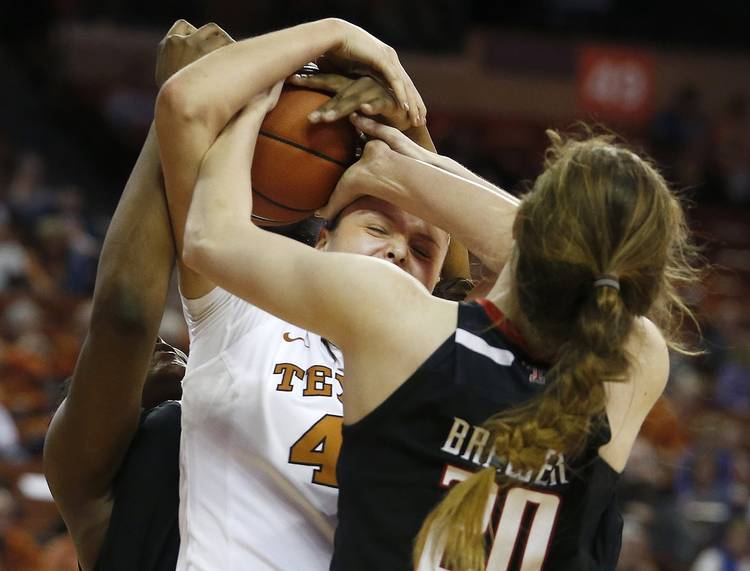 To the surprise of many, Texas has emerged as one of the best rebounding teams in women’s basketball.

Tina Thompson, however, is not among them.

Thompson, one of the greatest players in WNBA history who’s been a UT assistant coach the past two seasons, said she expected the Longhorns to be solid under the boards this year. Texas, even with the departure of 6-7 post Imani Boyette, has outrebounded opponents in 12 of its 13 games.

“This not not a surprise to me because this is something we work on every day,” Thompson said. “When you work on something every day, it becomes a habit. It’s no wonder you’re going to get better at it. It’s human nature.”

Defense and rebounding have been the backbone of Texas basketball during coach Karen Aston’s five seasons with the Longhorns. Beginning with the 2012-13 season, the Longhorns have ranked ninth, fourth, 12th, 16th and now fifth in rebounding margin.

Soft-spoken senior Kelsey Lang, no longer in Boyette’s large shadow, has been the focal point of Texas’ rebounding, averaging 10.7 boards the last nine games. Freshman forward Joyner Holmes has used her strength and versatility to average 8.5 rebounds over the last six games.

Holmes gave Thompson credit for her improvement under the glass.

“She’s been there and done everything we’re trying to accomplish,” Holmes said. “You’re learning from a WNBA All-Star.”

The Longhorns know plenty about Thompson’s accolades as a player. A 6-2 forward, she retired in 2013 as the WNBA’s career scorer leader. She was a four-time champion with the Houston Comets, a nine-time WNBA All-Star and a two-time Olympic gold medalist.

“It would be really hard for a women’s college basketball player not know Tina’s background,” Aston said.

Thompson averaged 15 points and 6.2 rebounds during her 17 seasons in the WNBA. She said Boyette’s departure forced the 6-5 Lang to crash the boards harder this season. After averaging just 4.5 rebounds a game as a junior, she ranks third in the Big 12 this year, averaging 8.8.

“Rebounding is something Kelsey would have done well, but not something she had to do,” Thompson said. “She had her buddy Imani cleaning it up.”

Thompson said rebounding is 30 percent fundamentals, 70 percent attitude. The coach is aware that Lang has often been labeled as a “soft” and “finesse” player.

“It’s never been a question on whether Kelsey could do it,” Thompson said. “I don’t want to change who Kelsey is. I enjoy very much who she is.”

Iowa State is the only team to outrebound the Longhorns this year, earning a 36-34 edge on Sunday. Texas won the game, though, 75-68, as Lang collected 11 points and 12 rebounds.

“It’s Kelsey’s senior year, and she wants to go out with a bang,” McCarty said.