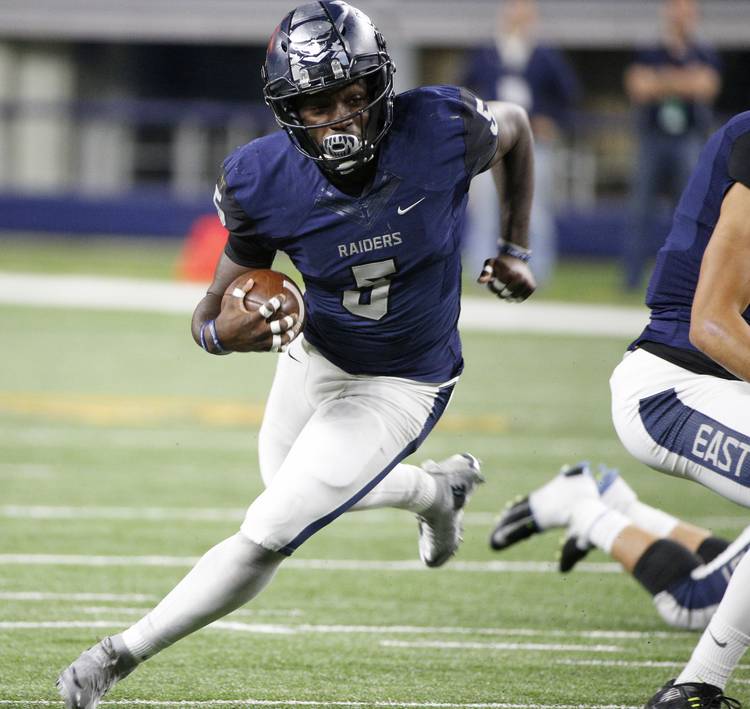 Here’s a look at all 12 Texans heading into Saturday’s game (noon, NBC).

The Sooners are putting together a strong class, and one of the reasons is the success they’re having recruiting Texas this cycle. Barnes is a perfect example, a big safety with a linebacker’s instincts and physicality. He’ll need to improve as a 1-on-1 pass defender to play meaningful snaps in the Big 12. He’s the 12th ranked player on the Fab 55.

Benjamin was impressive over the first two days of all-star practice this week. His running ability is unquestioned. But what’s been most impressive about Benjamin in San Antonio is his ability to catch out of the backfield. Benjamin was a Longhorns target until Tom Herman’s staff received two running back commitments in December. Benjamin is No. 31 on the Fab 55.

Denton Ryan was one of the best high school defenses in the state in 2016, and Brown was a major reason. His 6-5 frame gives him plenty of length to deal with bigger offensive tackles. His speed and athleticism around the edge make him a pass-rushing specialist and he can hold his own at the point of attack. He’s a steal for Northwestern.

The top player on the Fab 55 is heading to Ohio State. Browning looked the part early in the week and should be one of the stars of Saturday’s game. Browning looks like a defensive end and runs like a safety. That combination is rare in high school athletes. He’ll enroll early at Ohio State and hopes to make an immediate impact as a freshman. New Longhorns offensive coordinator Tim Beck was on the lead of his recruitment to Texas.

Injury kept Dobbins from putting up video game numbers as a senior. He was expected to help lead the Leopards to a long playoff run, but was instead sidelined for the season with an injury after the first play against Liberty Hill. It was an unfortunate end to a fantastic prep career. Dobbins won’t play Saturday due to his recovery.

Ranked No. 19 on the latest Fab 55, Filiaga is one of the highest-ranked prospects still uncommitted. Michigan appears to be the leader for the towering offensive tackle prospect who helped Aledo claim another state title less than a month ago. He’s adept at run blocking and quick enough to develop into a strong pass blocker.

Texas’ lone commit in San Antonio performed well in Tuesday’s mini-scrimmage against the East. He won every 1-on-1 battle after being somewhat overwhelmed at times during drills on Monday. Unlike a lot of the athletes in Saturday’s game, Kerstetter hasn’t spent the last few years going to elite camps around the country. He needed a day to adjust to the speed and physicality of playing against top athletes. Since shaking off the rust on Monday, Kerstetter has looked like one of the best guard prospects at the game.

The top offensive lineman in the state is another premier Texas athlete heading to a new destination in college. He recently picked Stanford over Texas. Little is a prototypical left tackle with all the tools to be successful at the college level and beyond. He has a big frame, quick feet and the ability and willingness to finish blocks at the point of attack. Little ranks fifth on the Fab 55.

It’s a loaded year for wide receivers in the state, and Manning could make a case as the best of the bunch. He’s one of 12 wide receivers ranked on the Fab 55, checking in as the fourth-ranked receiver and 23rd overall prospect. Manning appeared to be hobbled late in Tuesday’s practice after dominating on Monday and in the early session of Tuesday practice. He’s a TCU commitment, but the Longhorns remain very much in the picture heading into national signing day.

Okudah is our No. 20-ranked player on the Fab 55. He was considered a safety prospect by many, but he’s spent this week controlling one side of the field as a lockdown cornerback. Okudah is a physical freak of nature. He glides around the field, never looking like he’s running full speed, yet no wide receiver could beat him deep through two days of practices. He’s an Ohio State lean and is expected to announce during Saturday’s game.

Peevy reiterated his commitment to Texas A&M this week after some talk of taking future visits to other schools, including Texas. Peevy says he’s completely committed to the Aggies, and that’s good news in College Station because Peevy has looked impressive early during all-star workouts. He’s strong for a defensive end and has an elite first step. He’s No. 47 on the Fab 55.

The conversation for who’s the best quarterback in the state should include Robinson. A TCU commit who won a state title for his team less than a month ago has had an up-and-down week of practice, but he’s always looked better in game situations than at camps. He hopes to do the same during his snaps Saturday. Robinson is the definition of a dual-threat quarterback and might trust his legs more than his arm at this point in his development.