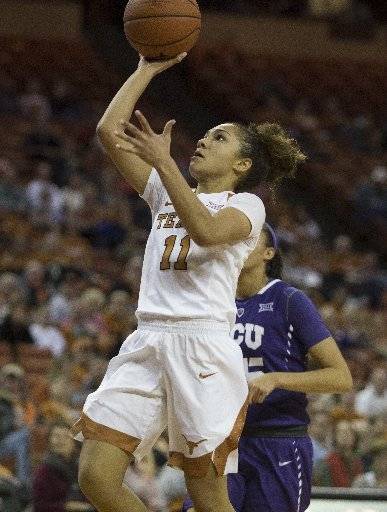 The line of statistics next to Texas guard Brooke McCarty’s name revealed plenty about how well she played Saturday night, just not the complete story.

For the rest, check out the numbers for TCU guard AJ Alix.

McCarty produced 16 points, five assists, five rebounds and two steals during an 83-54 victory for the No. 15 Longhorns at the Erwin Center.

She also was the primary defender most responsible for limiting Alix to five points, seven fewer than her team-best average. She scored only three when McCarty was in the game. Alix began the night with 44.4 percent accuracy on 3-point shots — fourth-best in the Big 12 — but she hit 1 of 7 against Texas, a meaningless basket in the fourth quarter. She converted 2 of 12 field goals overall.

Texas coach Karen Aston said McCarty has so much responsibility on offense as the Longhorns’ point guard that “I try to not give her the heavy load defensively. But she was up to the challenge tonight, and I could tell tonight she wanted to start our defense and make sure she was leading it.”

McCarty said the Longhorns (10-4, 4-0 Big 12) needed to play better defense than they summoned during a 66-54 win at Kansas on Wednesday.

“It wasn’t really a matchup that I asked for,” she said. “It was just like, she’s a point guard and I’m a point guard. We’re already matched up in that sense.”

Alix was not the only player who struggled for TCU (8-7, 0-4), which led the nation in 3-point accuracy before Saturday at 42 percent. The Horned Frogs converted 4 of 24 treys and 29.8 percent overall.

While McCarty was a star at both ends of the court, she received ample support. Freshman forward Joyner Holmes had 18 points, eight rebounds and two steals. Guard Ariel Atkins chipped in 14 points and five rebounds and matched her season best with four steals. Center Kelsey Lang, a senior, grabbed a career-best 14 rebounds — 11 in the second half — and had three blocks.

Texas outperformed TCU in several areas, but one that caught Horned Frogs coach Raegan Pebley’s attention was second-chance opportunities. Texas turned 21 offensive rebounds — including six by Lang and five by Holmes — into 21 points.

“Physical play on the boards is something we have to improve on,” Pebley said. “It’s not so much ability as it is focus and effort.”

Earlier in the week, Aston was the one lamenting lack of effort in the game at Kansas. But on Saturday, after gaining her 200th career win in 10 seasons at Charlotte, North Texas and Texas, Aston said she was impressed.

“I was really, really, really pleased with our sustained energy,” Aston said. “There have been some games we started good and had a bad second quarter or came out of halftime lackadaisical. I would say we got an ‘A’ in that category.”

Iowa State 79, Texas 70: Regardless of record, ‘Our fight is tremendous’