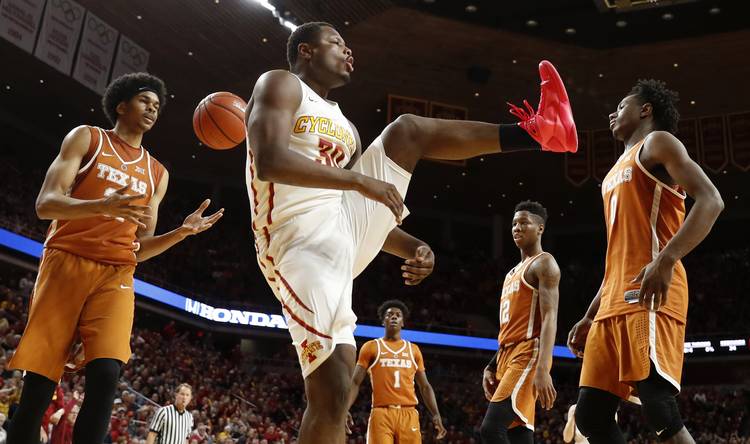 The Cyclones had an all-around solid performance Saturday night. The most experienced team in the Big 12 got 27 points from Deonte Burton and Morris himself poured in 22 more. They hit 10 3-pointers, shot 49 percent and turned it over only 11 times.

Iowa State ultimately pulled out a 79-70 victory in front of a capacity crowd at Hilton Coliseum. But the Longhorns made the Cyclones work all 40 minutes.

“You guys gonna be all over us down there,” Morris told Smart in the hallway, referring to the eventual rematch in Austin on Feb. 7.

You’ll get no quarrel from Iowa State coach Steve Prohm. “This is as good a team as we’ve played all year,” he said. Texas (7-8, 1-2 Big 12) cut a 14-point deficit down to six after halftime, let it balloon back to 13 and then whacked it back down to three with 3:42 remaining.

“Our fight is tremendous,” guard Kerwin Roach Jr. said. “Regardless of our record right now, regardless of the season we have going, I’m proud of our fight.”

Roach had 21 points and set new career marks in made 3-pointers (4 for 4) and minutes played (37). Tevin Mack, Andrew Jones and Jarrett Allen all finished in double figures as the Horns shot 53 percent, coming within a fraction of a new season high.

Turnovers, again, were the real bugaboo. Allen had six in the first half alone as Texas gave it away 19 times and missed eight free throws.

“I’ve got to be stronger with the ball, obviously,” Allen said. “I can’t let people rush me like they did tonight.”

The game swung on a sequence that Roach would love to do over. With Iowa State leading 68-65, Roach drew a charge on Burton with 3:22 remaining. On the ensuing UT possession, the play broke down, Roach lost his footing and basically threw the ball into no man’s land for a turnover.

Second later, Burton was driving in for an easy layup and Iowa State now led by five.

Mack missed a 3-pointer, and Iowa State’s Matt Thomas answered with a swish from 3-point range himself. The Cyclones went up 73-65 with 1:33 left.

“There were several of those situations in this game where we’ve got some momentum, some good stuff is happening and there’s a four or five-point swing where we didn’t convert and they did,” Smart said.

Roach said when it comes to offensive breakdowns, all the responsibility falls on the Longhorns.

Burton, wearing blazing neon pink shoes to honor is late mother who died from breast cancer, chipped in another layup to ice it. Allen had a career-high three blocks but Burton clearly won the individual matchup against UT’s big men. Shaq Cleare had only six points and James Banks was held scoreless.

The Horns were shorthanded from the start as guard Kendal Yancy (ankle) was held out. Eric Davis Jr. also left the game after knocking heads with another player in a scramble for a loose ball. Davis played only 19 minutes.

There was a 6-foot-9 reinforcement sitting in the stands, although he was unable to suit up. UT signee Jericho Sims, rated the No. 1 player in Minnesota, drove 3 1/2-hours south from his Minneapolis home to see his future teammates.

“I definitely picture myself out there right now,” Sims said. “It’s exciting every time I see them play.”

There’s plenty of growth and improvement for those who choose to look beyond the final score. Sims can see it. So could Morris.

By the time these two teams meet again next month, it could be a whole different story.

“I think as the season is going on, we’re learning how to fight,” Allen said. “We’re not giving up in games, not putting our heads down. This was just an example of us doing that.”