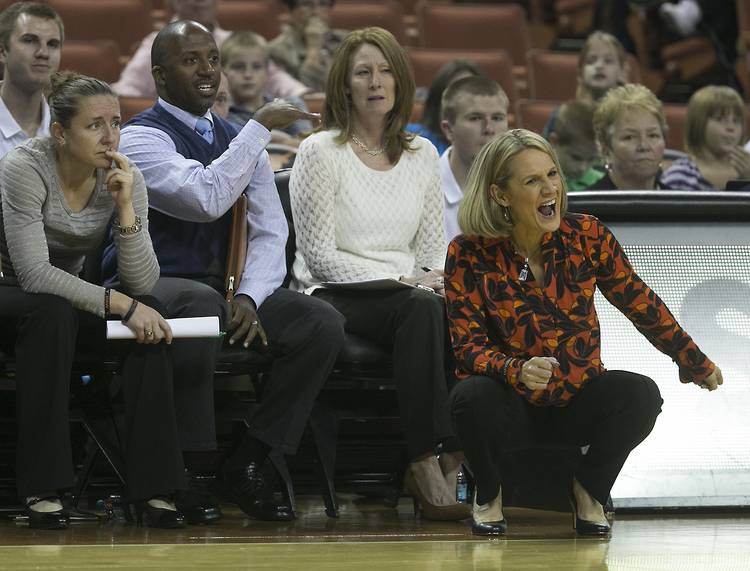 Karen Aston remembers her first coaching victory at the University of Texas as if it happened, well, five years ago.

Indeed, Aston opened her Texas tenure with a 70-60 win over 14th-ranked St. John’s on Nov. 9, 2012. It was at an early-season tournament in Daytona Beach, Fla. and the Longhorns were not expected to win.

“It was a nice way to start off here,” Aston said.

Under Aston, Texas has reached the NCAA Tournament four straight years. Even though she has “no timetable” for an appearance in the Final Four, the Longhorns are getting close, falling in last year’s Elite Eight to eventual champion UConn.

Aston, who was raised in Arkansas, said Texas wasn’t her dream job until she was hired by Jody Conradt to be a Longhorns assistant coach in 1998. She helped Texas reach the Final Four in 2003 before leaving after the 2005-06 season.

“Once you become an assistant coach here, you have an understanding of how great this place is,” Aston said Monday.

After starting the season 2-4 — all four losses came against Top 25 teams — the Longhorns have won eight in a row.

During the streak, Texas has outscored its eight opponents by an average of 24.6 points a game.

Coming off one of their least impressive games of the season, an 83-54 victory over Kansas last week, Texas played one of its best against TCU. No one played any better than freshman forward Joyner Holmes, who had a team-high 18 points to complement eight rebounds in 24 minutes.

“We had a pretty ugly win (against Kansas) and we had to come into the TCU game knowing we could win,” Holmes said. “We just had to play hard on both the offensive and defensive sides.”

Behind senior Kelsey Lang’s career-high 14 rebounds, Texas won the battle of the boards, 49-30. The Longhorns have owned the rebounding battle in 13 of their 14 games.

Iowa State 79, Texas 70: Regardless of record, ‘Our fight is tremendous’