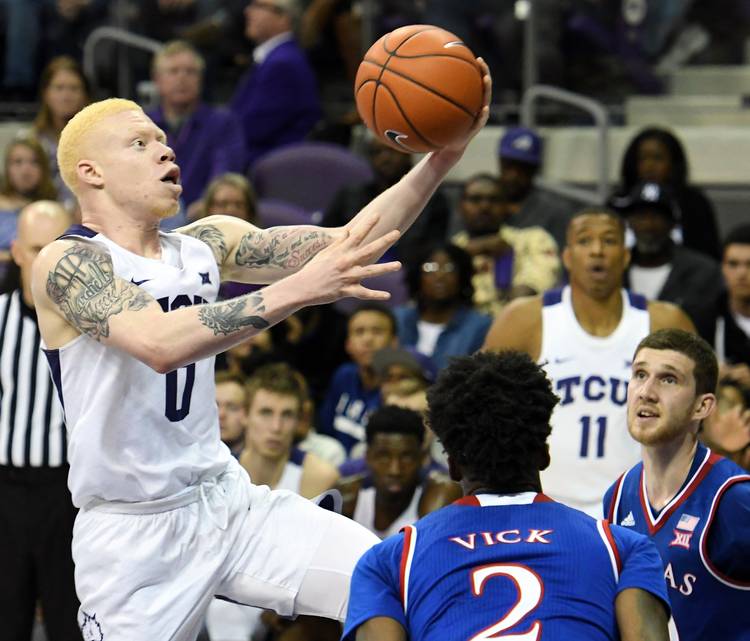 TCU's Jaden Fisher, left, lays up a shot over Kansas' Lagerld Vick (2) and Svlatoslay Mykhailuk during the second half on Friday, Dec. 30, 2016, at Schollmaier Arena in Fort Worth, Texas. Kansas won, 86-80. (Bob Haynes/Fort Worth Star-Telegram/TNS)

Shaka Smart doesn’t want his players looking ahead. The Texas men’s coach wants them solely focused on a rejuvenated TCU squad that hits the Erwin Center on Wednesday.

It’s probably best not to look ahead. After TCU comes Saturday’s home test against No. 10 West Virginia.

Then comes the biggest week in Smart’s two-season tenure — back-to-back road games against No. 1 Baylor and No. 2 Kansas.

“It’s all about Wednesday for us, being the best team we can be on Wednesday,” Smart said in calm tones. “Then we’ll focus on the next one.”

This isn’t the same woebegone bunch that Trent Johnson lugged around the last four years. First-year coach Jamie Dixon has breathed new life into the Frogs, a team that’s beaten UNLV, Washington and Oklahoma and gave Kansas all it wanted before losing by six.

This is one of those games that Texas normally wins, frankly. The Horns have won 14 straight home games over their Fort Worth counterparts. But this is no ordinary year, and Texas isn’t exactly Texas at the moment.

The Horns still rank last in most major statistical categories among Big 12 teams. That includes being last in turnover margin (minus-0.1). The Frogs are forcing opponents to turn it over 15.3 times per game.

Dixon’s club also gets solid contributions from the bench. TCU’s reserves have scored more than the opponents’ bench players in 13 of 15 games this season. Speaking of reserves, UT will be without guard Kendal Yancy, who continues to be sidelined by a high ankle sprain.

The upcoming schedule, while daunting on paper, isn’t too far off what is becoming the norm in the Big 12.

“Looking at our guys in the locker room, they know we’ve made strides as a team overall in terms of all the different elements of basketball,” Smart said. “Now it’s about being more consistent in putting all those elements together.”