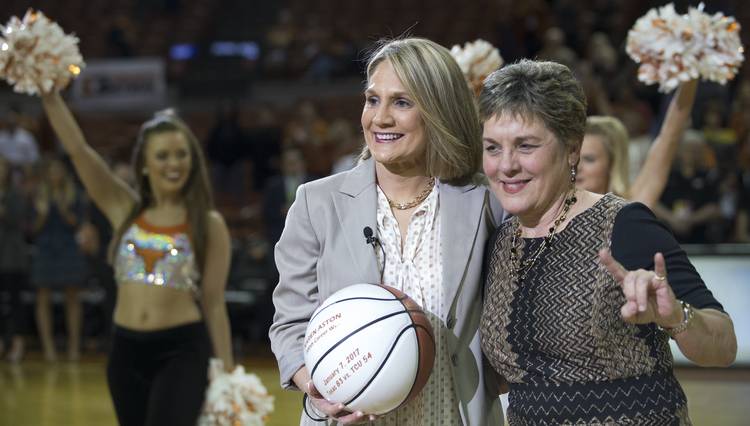 During a 66-35 victory over Oklahoma State on Tuesday, Texas hardly resembled the team that opened the season 2-4.

The 16th-ranked Longhorns have won nine straight games. They are starting to look more like the team that went 31-5 last season. Their latest victory was earned with a grind-it-out defense that baffled the visiting Cowgirls.

Brooke McCarty scored a team-high 16 points before 2,624 fans at the Erwin Center. Teammates Joyner Holmes, Alecia Sutton and Lashann Higgs chipped in 9 apiece. Texas won the rebounding battle 50-46, marking the 14th time in 15 games the Horns have finished with more boards than their opponents.

Yet it was a defense led by senior post Kelsey Lang that set the pace for the surprisingly easy victory. Lang helped limit OSU post Kaylee Jensen — the Big 12 leader in scoring and rebounding — to a season-low 11 points on 3-for-19 shooting from the field.

When someone suggested to Aston that the game was “ugly” at times, the fifth-year Longhorns coach disagreed.

“It wasn’t from a defensive standpoint,” said Aston, who earned her 100th career victory at the University of Texas.

Texas won despite shooting just 32.8 percent from the field (21 of 64). But Aston said the defensive intensity never wavered, crediting Lang for “sticking with the game plan” while guarding Jensen, OSU’s 6-4 junior.

Oklahoma State’s offensive production was worthy of the record books — for all the wrong reasons. The Cowgirls shot 18.6 percent from the field (11 for 59).

That was the lowest shooting performance for Texas since the Horns held Texas A&M-Corpus Christi to 14.5 percent from the field in 2012, Aston’s first year as UT’s head coach.

OSU’s total of 12 points in the half ties a UT record for fewest points scored by an opponent in a half. Last season Texas allowed just 12 points in the first half during a victory over Northwestern State.

Aston also gave credit to Texas reserves. The Longhorns, shuffling their lineup frequently, had a 31-10 edge in bench points.

Among the players who shined on Tuesday was Khaleann Caron-Goudreau, the 6-4 sophomore forward who tied her season-high of 7 points while contributing to UT’s stiff interior defense.

Caron-Goudreau said “something clicked” inside her over the weekend and is beginning to feel “more comfortable” in her first season in burnt orange.

Oklahoma State coach Jim Littell said a combination of UT’s defense and his own team’s ability to find an offensive rhythm doomed the Cowgirls.

Littell was asked what message he delivered to the players after scoring just 12 points in the first half.

Texas has won four straight over over Oklahoma State. This marked OSU’s lowest point total of the season. The previous low was in Saturday’s 86-50 loss to No. 2 Baylor.

NOTES: Rellah Boothe of Ocala, Fla., and Chasity Patterson of Houston (North Shore High School) have been nominated to play in the McDonald’s All-American All-Star Game March 29 in Chicago. …