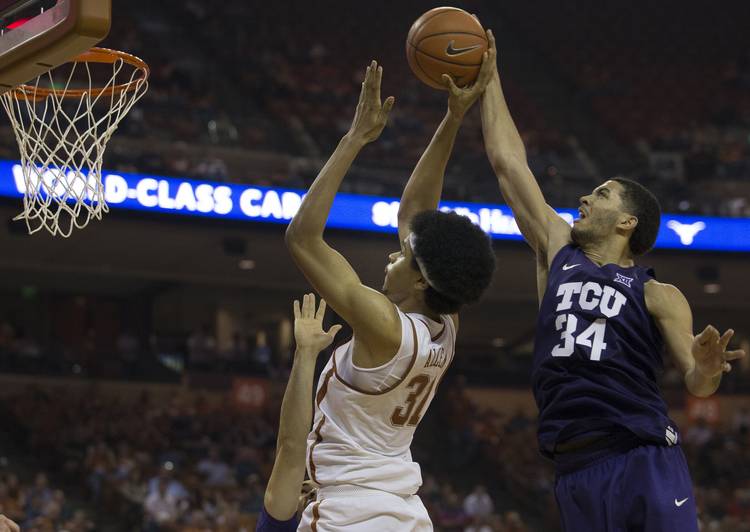 The screams coming from purple-clad fans sitting behind the TCU bench were undeniable, though. Those same shouts of joy emanated from the southeast corner of Royal-Memorial Stadium in November, too.

Beating Texas is getting to be old hat for little ol’ TCU.

“We’ll check ’em over,” Dixon said after the Frogs danced out of the Erwin Center with a 64-61 win over the Longhorns. “Our athletic director and administration was there, so that was good. Hopefully I don’t get terminated this week.”

Fat chance of that as long as the indefatigable Chris Del Conte is calling the shots in Fort Worth. TCU’s energetic athletic director picked Dixon to come home and lead his alma mater. In fact, Dixon was on the last TCU team to beat Texas in Austin on Feb. 18, 1987. He had 18 points and nine assists in a 70-54 win over Bob Weltlich’s Longhorns.

TCU had lost 14 straight basketball games at UT prior to Wednesday night.

“Coach, he put it on us before the game,” said TCU guard Jaylen Fisher, who had 16 points and drilled four 3-pointers. “He made it a big deal.”

“I think it’s a test,” UT coach Shaka Smart said. “It’s a real test or challenge for everyone in our program, me included. The question is what are you going to do next? How are you going to respond?”

It’s unclear how the Longhorns will respond considering the final images from this one.

Leading by three with five seconds left, Fisher missed a free throw and the Horns got the rebound. With no timeouts at its disposal, Texas had to advance on the fly. But Kerwin Roach Jr. dribbled the ball at half-court and essentially dribbled out the final seconds.

After the horn, Roach and fellow sophomore Tevin Mack were barking at each other. Granted, Mack woofs at just about everyone but another teammate?

“It was no frustration, he was just giving me advice on what I should have done,” Roach said.

What was the advice? “Swing it ahead,” he said.

Smart said he caught the tail end of their exchange.

“They’re very disappointed that we lost, so it’s understandable to have emotion,” the coach said. “But we need to make sure as a team we stay connected. There are obviously things we gotta get better at, and we need to work on those things together.”

Roach was clearly frustrated about everything, not just the final play. He also missed a wild layup just before the shot clock expired with 20 seconds left that could have been the go-ahead score. Eric Davis Jr. also missed a 3-pointer with 8 seconds remaining.

Jarrett Allen had 18 points on 8 of 14 shooting, but he was the only Horn in double figures. TCU got 38 points in the paint as Vladimir Brodziansky racked up 19 inside by going right at Allen and Shaq Cleare.

“I’ll give it to him,” Allen said. “He had a good right-hand hook. It was just a good matchup.”

What will bother everyone inside Cooley Pavilion is that this was another winnable game that slipped away. Texas had a 34-26 lead in the first half, but TCU erased that was a 12-2 run before the break.

The Horns battled back, as they normally do. Davis’ 3-pointer gave the Horns a seven-point lead with 10:01 remaining in the second half. But that lead soon dissipated, too. A 14-2 run gave the Frogs a 58-53 lead with 3:33 remaining.

Asked about the final sequence, Roach said, “To be honest, it should have never got to that point. We were up by seven and we should have just kept that going. We shouldn’t get in situations like this.”

And yet, they do. Now more than ever, Smart must keep his young players from peering into the abyss.

“You can win without being perfect,” Smart said, “but we have to be more about lifting each other up.”

Longhorns search for a third cornerback in the 2017 recruiting class