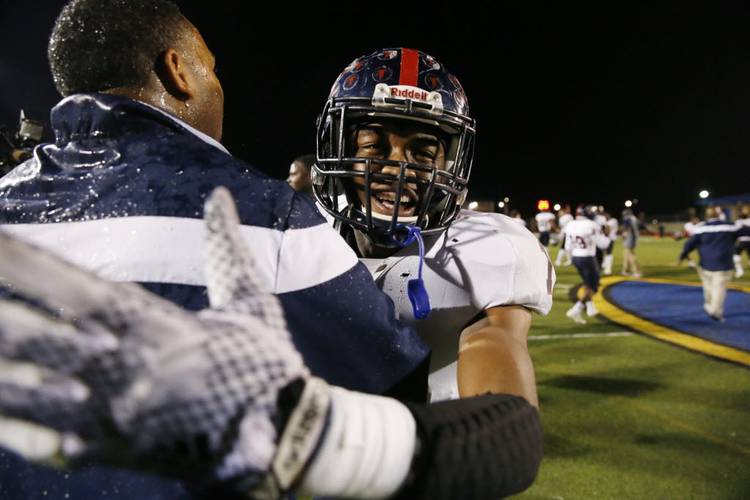 Texas wants to sign another cornerback in the 2017 recruiting class. The Longhorns have commitments from two cornerback prospects — Kobe Boyce and Josh Thompson — but it’s clear that one of Tom Herman’s top priorities in these final three weeks before signing day is to find one more piece to add to the outside of his defense.

Thompson and Boyce committed to Charlie Strong and stayed with the Longhorns after the coaching switch. Four cornerback candidates have emerged to become the third member at the position in this class.

Texas needs to regain footing in the Dallas-Fort Worth hotbed, and a commitment from Calloway would represent an early win for Herman. The four-star cornerback is a different mold than Strong’s preferred style of cornerbacks. He doesn’t have elite size. He stands at 5-10, while the cornerbacks in Texas’ past few classes were usually 6-feet. Calloway makes up for his lack of height and length with sheer athleticism. He’s quick, explosive and good at attacking the ball in the air. He’s also a willing tackler and an option to cover the slot.

Arkansas is the team to beat, but Calloway takes his official visit to Texas this weekend.

Hours after Kendall Sheffield committed to Ohio State, Guidry picked up a Longhorns offer. It could have been a coincidence, but the move made it clear that Herman is seeking at least one more cornerback. It’s a priority, and Herman chose to give the next available offer to a former Houston commit. Guidry is no stranger to Texas. He was a star two-way player for Cedar Park his sophomore and junior seasons. He’s undersized, but has legit track speed.

Curl is a longshot and might not even make it to Austin for an official visit; 247Sports lists him as a slight Oklahoma lean, with TCU and Texas Tech also in the mix. But Curl does hold an offer from Texas, and if he takes his fifth visit to Texas on a date like Jan. 20, the Longhorns will be in the running. Curl is a 6-2, rangy cornerback in the mold of a Holton Hill-type frame. He might not have the upside or technique as Hill at this stage in his development, but Curl is a quality player with desired traits.

Robertson is another corner that Texas’ previous staff probably would’ve shied away from because of his size. He’s only 5-9, but Robertson can flat-out run. The LSU commitment has yet to receive an official offer from the Longhorns, who are deciding what to do if their first few options fall through. Numbers might keep Robertson from Texas, but he’s scheduled to visit UT on Jan. 20. With Sheffield’s commitment to Ohio State and Calloway’s potential commitment to Arkansas, an offer might come shortly.

Welcome to Texas: Longhorns will host recruit Chevin Calloway, 9 others this weekend