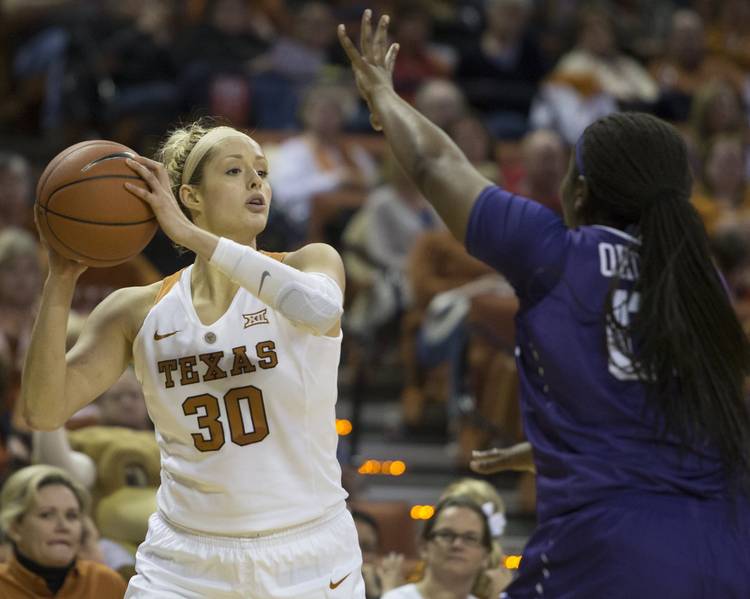 Khaléann Caron-Goudreau never felt the urge to play hockey with her friends back home in Canada.

She and her twin sister, Audrey-Ann, elected to blaze the same trail that their older brothers Maxime and Alex created. While many of their friends and neighbors could be found in hockey rinks, the Caron-Goudreaus were a basketball-first family in Gatineau, Quebec.

As members of Canada’s junior national teams, the twins have had their passports stamped in several exotic locations: Taiwan, Belgium, Mexico, Cuba and The Netherlands. They have their eyes focused on the 2020 Olympics in Japan.

The sisters are becoming accustomed to playing with the Longhorns, their new team. The Texas forwards have battled back from injuries to become valuable pieces for a team that vows to make a spirited run in the NCAA Tournament in March.

It has taken Khaléann half a season to get comfortable at Texas. She missed the first three games with a left knee bruise — the same injury Audrey-Ann suffered in December — but played her best game so far in Tuesday’s 66-35 victory over Oklahoma State.

A recent phone call with a former mentor might have changed her season. After the team returned from its road trip to Kansas last week, she talked with Shell Dailey, her former coach at IMG Academy in Bradenton, Fla.

“Things were not right with me at the time,” she said. “She told me she’s never seen me when I wasn’t confident. I needed a wakeup call, and that helped me get out of my pity party.”

The Caron-Goudreau sisters moved to Florida when they were 15. They signed to play college basketball at Vanderbilt, but transferred after one season.

“I only played three games for Vanderbilt, so I basically went two years without playing in a real game before this season,” Khaléann said.

Khaléann, though, gained valuable experience while practicing daily with her Texas teammates.

The sisters have established themselves as effective offensive players who play with passion. Perhaps too much passion.

“They use their length pretty well and are really aggressive,” Texas coach Karen Aston said. “What you need to keep them from doing is running over somebody and fouling.”

Indeed, Khaléann fouled out in only 16 minutes in last Saturday’s 83-54 victory over TCU.

At 6-4, the Caron-Goudreaus help fill a void vacated by 6-7 Imani Boyette, who anchored the frontcourt for four years. They have blended in with 6-5 senior Kelsey Lang and 6-3 freshman Joyner Holmes to create one of the best rebounding teams in the country. The Longhorns rank No. 4 in the country (out of 344 teams) in rebounding margin, grabbing 13.5 boards more than their opponents per game.

Khaléann gave most of the credit to Lang and Holmes for UT’s strong interior game.

“We’re running the floor better than we’ve ever done before,” she said.

The pity party is over.