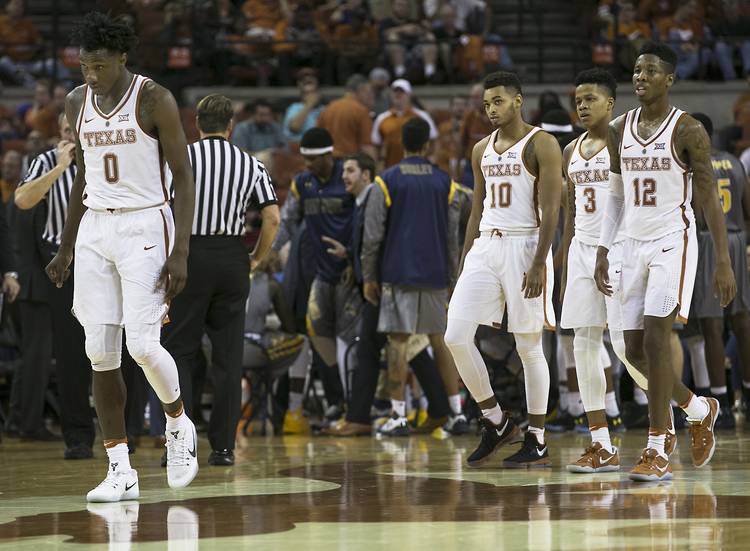 Texas will be without sophomore Tevin Mack, left, on Saturday against West Virginia. RALPH BARRERA/AMERICAN-STATESMAN

In retrospect, Shaka Smart’s thoughts after Wednesday night’s loss to TCU was a prescient warning.

“This game is a team game,” the Texas coach said, “and the team is a sum of guys that want to be greater than the sum of its parts. We’ve got a long way to go with that.”

No. 10 West Virginia, Saturday afternoon’s opponent at the Erwin Center, ranks fifth nationally in scoring. Next week, Texas travels to face No. 1 Baylor and then No. 2 Kansas. It’s not exactly the ideal time to bench your best scorer.

Sophomore guard Eric Davis Jr. will likely move into the starting lineup in Mack’s place. The Longhorns (7-9, 1-3 Big 12) were already down to an eight-man rotation with Kendal Yancy sidelined with an ankle injury. Yancy said Wednesday he hoped to be back against the Mountaineers (14-2, 3-1).

But Smart’s decision to sit Mack appears to be a marker, something akin to drawing a line of what is and what is not acceptable behavior to the head coach.

No players were made available to reporters on Friday. Smart has not discussed the decision beyond a brief two-paragraph statement issued Thursday.

All that anyone will say is Mack violated undisclosed team rules. However, it’s the second time this season that he has been suspended. He missed the team’s preseason exhibition game as well as the season opener for something that happened months prior, Smart said at the time.

Mack isn’t afraid to talk smack during games, and he was in full-throated force against Oklahoma State. The 6-7 swingman scored a career-high 27 points and went 4 of 7 from 3-point range. “I’m taking it any way I can get it right now,” Mack said afterward.

Smart demurred when asked about Mack’s on-court antics toward opponents.

“You don’t want to hamper them,” Smart said Wednesday. “I’ll be honest with you, with Tevin I’m going to focus on the most important things. It’s kind of like my mom used to always tell me: ‘You have to pick your battles.’

“As long as he’s under control …,” Smart added before stopping himself.

Mack was seen yelling at Kerwin Roach Jr. after the final possession of the TCU loss. Roach essentially dribbled out the final seconds, and the two sophomores started yelling at each other on the court. Roach downplayed the incident afterward, but Smart admitted “there was a level of frustration that came into play tonight.”

It’s unlikely Mack was suspended for that specific incident.

All of this comes at a pivotal time both on and off the court. Not only do the Longhorns have three difficult games ahead, the players also return to school next week. They’ll be around their peers, who no doubt will quiz them about what’s gone wrong.

In some positive news, the Longhorns should learn where they stand with coveted point guard Matt Coleman on Monday.

Coleman could give the Longhorns a headline boost, but he wouldn’t arrive until next season. The Longhorns have to figure things out on their own, with or without players like Mack.

“It’s not really a matter of what the score is,” Smart said. “Are you wiling to play 1,000 percent for Texas and following the plan as a team that we’ve all laid out regardless of what happens on the last play, or the last series of plays or the last half?”