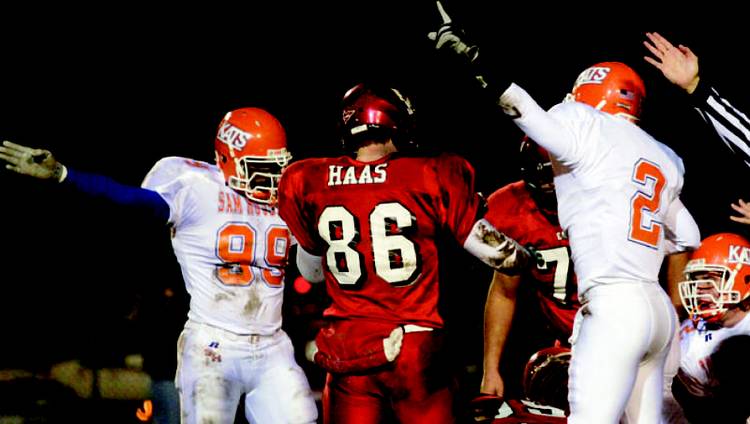 In a game against Eastern Washington, in the 2004 I-AA national quarterfinals, Tom Herman helped rally Sam Houston State to a 35-34 victory by inserting 6-4 receiver Vince Cartwright into the game to block a crucial field goal late in the contest. (GoBearKats.com)

Fresh off his stint as a graduate assistant at Texas, Herman headed east for Huntsville in 2001.  Herman coached Sam Houston State’s wide receivers and special teams for four seasons, and multiple reports had Herman — Texas’ $5.25 million man — making $10,000 per year during his time in Huntsville. Sam Houston State, which played on the Division I-AA level, certainly got its money’s worth from 2001-04.

The play that Bobby Williams — Sam Houston State’s longtime athletic director — associates the most with Herman, though, has nothing to do with a catch.

In that same game against Eastern Washington, in the 2004 I-AA national quarterfinals, Sam Houston State trailed 34-28 with less than a minute to play. The Eagles were about to try a 37-yard field goal to seal the win, but Herman inserted 6-4 receiver Vince Cartwright into the game. Cartwright, a special teams novice, came up with the block and the Bearkats rallied for a quick touchdown drive for a 35-34 comeback victory.

“That was a moment I remember, making the change to put him in,” said Williams, who lauded Herman’s attention to detail and ability to communicate. “I think that showed his ability to project and see when you need to make a change, and it worked.”

Sam Houston State fell to Montana the following week, and longtime coach Ron Randleman then retired. Todd Whitten was hired from Tarleton State to replace Randleman, and he chose to not to retain Herman on his staff.

“Ron Randleman, a great coach, retired, and the next guy who came in — (I) don’t blame him whatsoever — brought his own guys in, and I was out of a job after going 11-3,” Herman recalled at his introductory press conference at Texas. “It was a pretty nerve-racking time in my life.”

Williams said both he and Randleman urged Whitten to keep the 29-year-old receivers coach. Williams recently expressed regret that he didn’t force the staffing decision. Still, history shows that Sam Houston State was the first — and, so far, only — school to fire Herman.

“I guess,” said Williams, who pointed out that Sam Houston State may not have been able to keep Herman anyway.

Had he stayed on Whitten’s staff, Herman would have continued to be a position coach in Huntsville. That next season, however, he found himself directing Texas State’s offense.

Editor’s note: This is the second installment of a seven-part series about new Texas coach Tom Herman. American-Statesman staff writers Brian Davis and Danny Davis visited each of his previous coaching stops to learn about his journey from becoming a UT graduate assistant in 1999 to the head coach on Nov. 26, 2016.