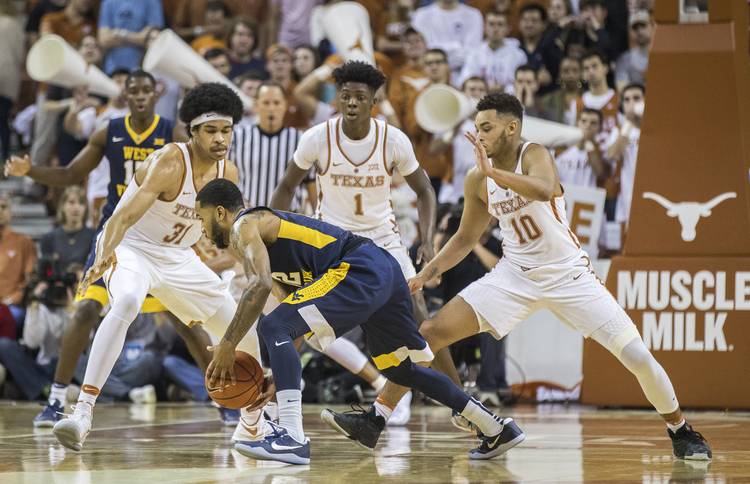 For weeks now, Kerwin Roach Jr. has been hopeful that Texas could “get over that hump.”

The Longhorns believe they’re close. Of the team’s nine previous losses, four were determined by three points or fewer.

Make it five after Saturday’s 74-72 loss to 10th-ranked West Virginia at the Erwin Center.

“Again today, I think when we watch the tape, we’ll say, ‘Hey, one less turnover here, one extra loose ball there,’” Texas coach Shaka Smart said. “We’ve got to get a little bit better with that.”

Playing without your leading scorer against the nation’s fifth-highest scoring team usually spells trouble. But Texas (7-10, 1-4 Big 12) actually had one of its better offensive performances against one of the most relentless outfits in college basketball.

West Virginia (15-2, 4-1) took down No. 1 Baylor earlier in the week and brought its “Press Virginia” defense all the way to Austin. Coach Bob Huggins’ team leads the nation in forced turnovers (24.6) and got Texas to cough it up 19 times. Still, the game never had a hectic feel.

As UT’s chief ballhandler, Roach never lost his cool under the Mountaineers’ defensive pressure. He had 11 points and five assists, and he refused to get lulled into their defensive traps.

“You don’t want to get rattled,” Roach said. “They feed off that. So stay calm, and at the end of the game, they didn’t really want to press. They were just backing up.”

The Longhorns were without sophomore Tevin Mack, who is suspended indefinitely. Asked afterward if Mack’s suspension was related to a university policy, Smart said, “This is my decision.”

It’s the second time Mack has been suspended this season. He sat for the opener against Incarnate Word but watched from the UT bench. This time, he was nowhere to be found. Smart confirmed that Mack is not practicing with the team, either.

So the Horns were without Mack (14.8 points per game) and senior guard Kendal Yancy, who is still bothered by a high ankle sprain. Essentially, Smart had just a seven-man rotation against Huggins’ 11.

Graduate senior Mareik Isom, an Austin native who’s been sidelined by an ankle injury, finally made his season debut. Isom played only 3 minutes in the first half and had just one shot.

“We gave them a day off after the Baylor game,” Huggins said of his troops. “I tried to talk to them right after the game to make sure we came in and got ready. We just didn’t have any energy. Honestly, you’ve got to give them credit.”

Seesaw games usually turn on one or two possessions, and so did this one. Jones’ 3-pointer from the right wing tied things at 60 with 6:51 remaining. Then Roach threw the ball away on an inbound play after a timeout. Jones missed a 3-pointer and then lost the ball going to the rim. A shot by Cleare was blocked with 3:59 left.

West Virginia inched ahead to a 66-60 lead with 3:23 remaining. Jacob Young hit a rare 3-pointer, and Allen sank an 8-footer. West Virginia had an answer for all of it. Jevon Carter (17 points) scored twice, and Nathan Adrian and Carter both drilled free throws in the final 37 seconds.

“It’s pretty tough when you’re that close, losing by two points to the No. 10 team in the country,” Roach said. “We’ve just got to stay together.”