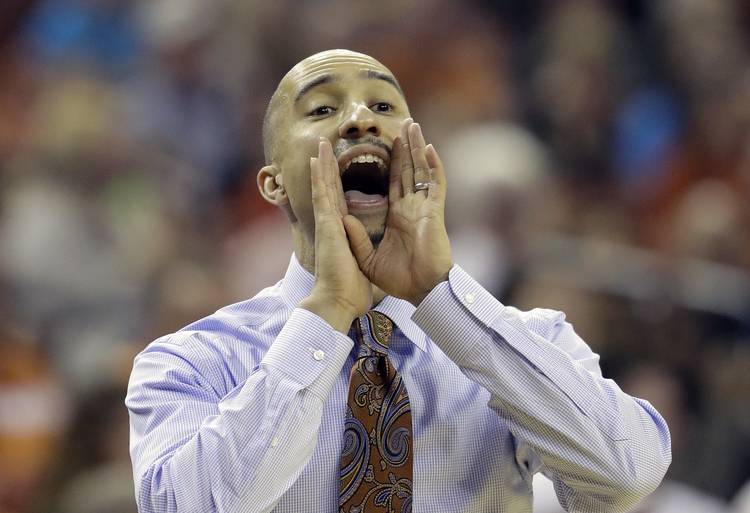 Texas coach Shaka Smart calls to his players during the first half of an NCAA college basketball game against West Virginia, Saturday, Jan. 14, 2017, in Austin, Texas. (AP Photo/Eric Gay)

Shaka Smart’s been watching Matt Coleman for years. As the Virginia native rose from an unknown eighth grader to the 31st-best recruit in the nation, Smart saw it all.

Smart believed that Coleman would some day become Virginia Commonwealth’s point guard of the future. Literally hours after Smart got the Texas job in April 2015, he called Coleman and offered him a scholarship.

Smart’s dogged pursuit finally paid off on Monday as the 6-foot-1 point guard announced he’s committing to Texas over Duke.

“Longhorn nation, the wait is over,” Coleman said during an announcement on ESPNU. “I’ll be attending the University of Texas. Hook ’em, baby.”

The news was much-needed boost of positivity for a team headed to Waco for Tuesday’s game against No. 6 Baylor. Coleman fills an immediate need and probably becomes an instant starter the moment he steps on campus.

Coleman is considered the nation’s eighth-best point guard prospect by 247Sports. Inside Cooley Pavilion, the UT coaching staff believes that Coleman could have just as much impact for Smart as T.J. Ford did for former coach Rick Barnes. Ford lifted the Horns to the 2003 Final Four.

By adding Coleman, the Longhorns have a well-rounded recruiting class for 2017. Shooting guard Jase Febres and forwards Jericho Sims and Royce Hamm are all considered four-star prospects.

Texas has the sixth-best recruiting class, according to 247Sports, and could move into the top three if UT can land 6-foot-11 forward Mohamed Bamba from New York.

How important was Coleman? The UT coaching staff made the tactical decision not to pursue any other point guards in the 2017 class, at least none with the laser-like focus they had on Coleman. Their pitch was simple — Duke wanted Coleman; Texas needed him.

“Welcome to the brotherhood,” Ford tweeted on Monday after Coleman’s announcement. “He is a great addition with the opportunity to impact Texas Basketball under @ShakaSmart.”

Smart cannot talk about any prospect until he signs a national letter of intent, according to NCAA rules. The spring signing period begins in mid-April.

Thus, Smart can’t talk publicly about the player he perceives to be a program game-changer. However, he was visibly upbeat while talking to reporters Monday. “Good day,” he said. “Great day.”

“When you’re in the early stages of building a program, you just want to bring in high-quality people that you feel like can be good players but also fit in with what you’re doing,” Smart said. “You do the best you can to know what’s really inside guys.

It wouldn’t have been an issue had Isaiah Taylor stayed for his senior season. But the dynamic guard jumped into pro ranks and now plays for Houston’s NBA Development League team. Freshman Andrew Jones wanted to be recruited as a point guard, but he simply isn’t ready for 30-plus minutes handling the ball that much.

Smart got considerable face time with Coleman as the head coach of the Team USA Under-18 squad that played in Chile. In five games against some of the world’s best players, Coleman averaged 7.8 points and 4.4 assists in five games. He shot 53 percent overall and went 5 for 12 from 3-point range.

As a senior at Oak Hill Academy, Coleman is averaging 10.7 points and 6.2 assists per game while shooting 58 percent overall. The school is located in Mouth of Wilson, Va.

Sam Ehlinger is ready to start a new chapter at Texas: ‘The future is big’

Destination Texas, Part 4: With his offense and Mensa card, Tom Herman fit right in at Rice