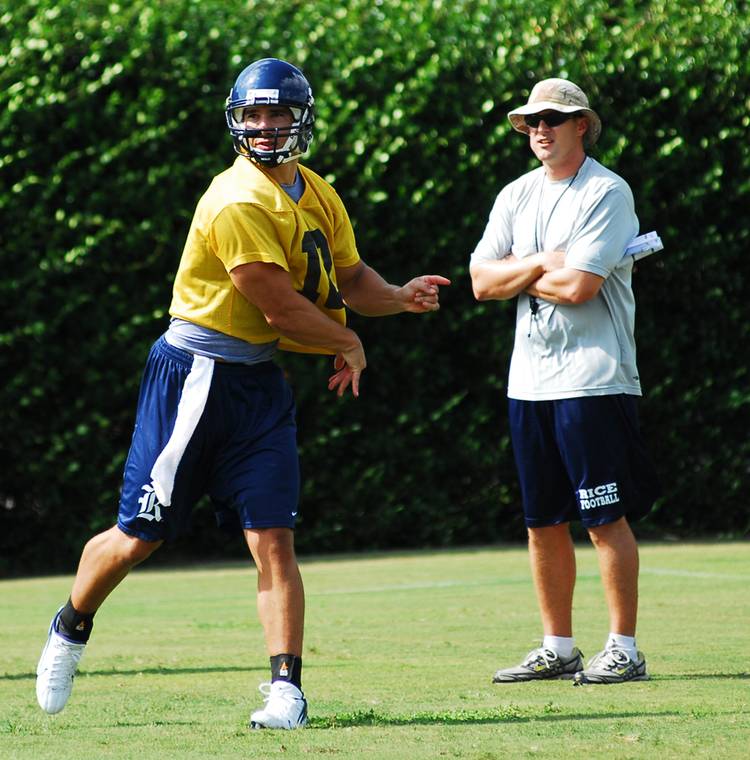 HOUSTON — Tom Herman followed former Texas State coach David Bailiff to Rice in 2007, and there was a clear directive for the Owls’ new offensive coordinator.

“When we took the Rice job, I told Tom, ‘You need to pay your Mensa dues and get your cards,’” Bailiff said with a laugh. “The people at Rice really get a kick out of knowing my OC’s a card-carrying member of Mensa.”

Herman was tailor-made for the “Harvard of the South.” His high IQ should’ve been called into question anytime the 32-year-old coach with terrible knee problems rode down the stadium ramp on a skateboard. “I told him to knock that off,” Bailiff said.

Even with his youthful enthusiasm and energy, Bailiff said, “He had gray-haired knowledge, if that makes sense to you.”

For decades, Rice had been stuck in a time warp. The stadium still had the same bleachers that fans used in September 1962 when President Kennedy declared U.S. astronauts would go to the moon by the end of the decade. Former Owls coach Ken Hatfield was long known for running the wishbone, an option-based offense cherished by old-schoolers.

“They were young, energetic, they had a great game plan,” said Chris Del Conte, who was Rice’s athletic director at the time. “A lot of that credit goes to David Bailiff. But when Tom came to Houston, he had a plan.”

The Owls couldn’t really utilize the same power-running style the coaches had with the Bobcats. Todd Graham had spent only one season with Rice and left town, so Bailiff was stocked with mostly Hatfield’s recruits — leaner offensive linemen better suited to get out wide on option plays.

“He took his ego out of it,” recalled former Rice quarterback Chase Clement. “He came in and basically said, ‘Here’s the offense that was successful at Texas State. We had a great run, but obviously that’s not going to work here.’”

By midseason, the Owls were starting to fly. Rice scored 48 points against Houston, 56 against UTEP and 43 against both SMU and Tulsa. Granted, the team finished 3-9. But it laid the foundation for an explosive year in 2008. After a 3-3 start, Rice closed the season with seven straight wins and a victory over Western Michigan in the Texas Bowl.

“When I think about our offense, we really had so many different plays and so many different formations because the guys could handle that,” Clement said. In 2007 and 2008 under Herman, Clement threw for 7,496 yards and 73 touchdowns.

“To me, Texas football is Mack Brown because that’s what I grew up watching,” Clement said. “So to me, Tom Herman? Really? He’s sitting in Mack’s chair! To me, it’s crazy that he’s there.

“But you look at the body of work that he’s put out, he certainly deserves it.”

Editor’s note: This is the fourth installment of a seven-part series about new Texas coach Tom Herman. American-Statesman staff writers Brian Davis and Danny Davis visited each of his previous coaching stops to learn about his journey from becoming a UT graduate assistant in 1999 to the head coach on Nov. 26, 2016.