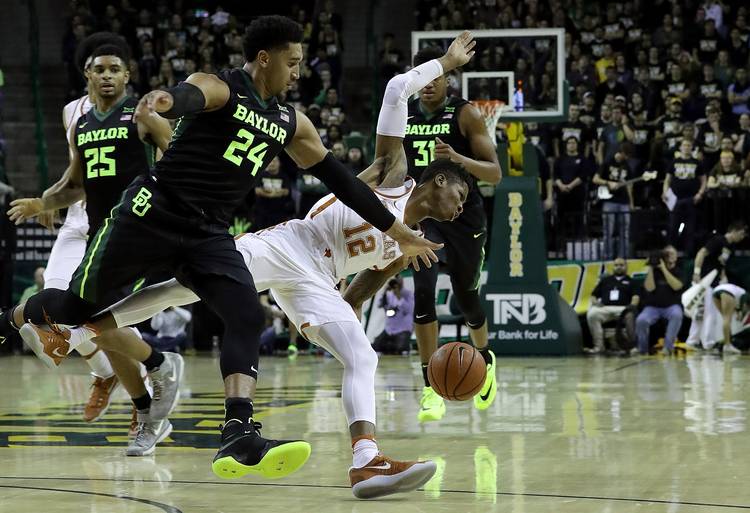 Ishmail Wainright (24) of the Baylor Bears fouls Kerwin Roach Jr. (12) of the Texas Longhorns in the first half at Ferrell Center on January 17, 2017 in Waco, Texas. (Photo by Ronald Martinez/Getty Images)

It would have done them some good to hear Johnathan Motley preach.

Motley simply went wild Tuesday night, setting new career highs with 32 points and 20 rebounds as the sixth-ranked Bears captured a 74-64 win. Maybe it took Motley all 85 career games to reach this point, but to hear him explain how he did it would’ve been music to Smart’s ears.

“I mean, it’s kind of hard to explain,” Motley said. “You don’t really remember what you do, you’re just kind of out there going through it. I can’t really tell you the moves I made, I just forgot. It just goes away.”

To which Baylor coach Scott Drew interjected, “That’s the right attitude. Focus on the next play. I like that.”

It’s the most anyone has scored against Texas (7-11, 1-5 Big 12) this season. Motley fell one point shy of tying Oklahoma’s Buddy Hield’s 33 in Austin last season as the most UT has allowed in Smart’s two seasons.

Texas hit a 3-pointer early and another one late but missed 17 all together, finishing with a season-low 10.5% from beyond the arc.

Motley’s post-game explanation is exactly what Smart’s been preaching since he landed in Austin — practically chapter and verse. When you set individual goals aside and focus on the team, Smart believes, positive things can happen. Don’t let one bad play ruin the next, he says almost daily.

Texas was competitive in its five previous league games, although the final results weren’t desirable. The Horns started this one well, even jumping out to an early 19-15 lead. When Jones drilled a 3-pointer from the left wing, the freshman held a finger to his lips and tried to shush the crowd.

The Longhorns even had a 27-22 advantage after Kerwin Roach Jr. hit a pair of free throws with 5:17 remaining before halftime.

“I thought the way our guys started the game, the mentality they had, the way they were connected, the way they tried to guard was very, very good,” Smart said.

Then, things started going downhill. Roach was called for traveling. Eric Davis Jr. missed a 3-pointer. Roach threw a bad pass to Allen. Jones missed a 3-pointer. Suddenly, Baylor had a 31-27 lead with 2:58 left before the break, and it truly felt like the tide had turned.

“I guess some of my teammates saw the other team making shots and some of their shots weren’t falling, I think our defensive energy went down a little bit,” said Cleare, who tied his career high with 14 points.

The Bears (17-1, 5-1) pushed to a 38-31 lead at halftime. Motley opened the second half with back-to-back buckets and suddenly, the Horns found themselves in a 10-point hole.

“Hey, in the first half, we’re up two, up four, it’s a tie game, we’re down a few. it’s anybody’s game. Keep playing,” Smart said. “But that requires a level of connectivity as a team and an ability to move on from the last play.”

Blame youth, inexperience, a lack of mental toughness or some combination of all three.

“Sometimes we let missed shots and when plays don’t go our way, we kind of let that affect us,” Jones said. “We’ve got to learn how bounce back, stay strong, stay mentally strong, focus on the next play, focus on each other and not focus on individual play.”

For Smart, asking his players to develop mental toughness must be a hellish ask while staring down one buzzsaw after another. Texas next heads to Lawrence for a Saturday matinee with No. 2 Kansas.

It’s a dynamite road trip for fans but brutal for anyone that steps on the floor and faces the Jayhawks.

“As long as we stay together as a family, stay together in the gym, always continue to get better,” Jones said, “things will always be brighter for us in the future.”