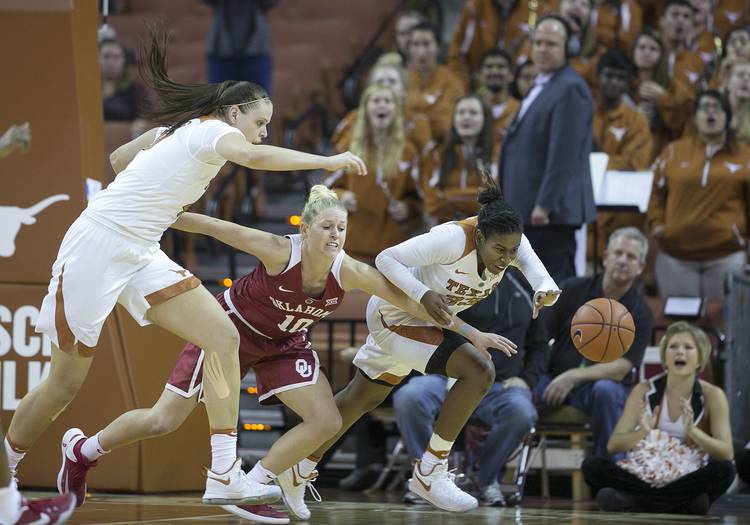 Texas' Kelsey Lang, left, and Ariel Atkins race for a loose ball against Oklahoma's Peyton Little during the second half of an NCAA college basketball game Tuesday, Jan. 17, 2017, in Austin, Texas. (Deborah Cannon/Austin American-Statesman via AP)

Texas exended its winning streak to 11 games by following a player who never scored a point.

When the Longhorns needed a key rebound, senior Brianna Taylor was there. When they needed a defensive stop, Taylor came on strong. When they pulled away in the fourth, it was the fist-pumping Taylor who energized the team.

Joyner Holmes and Ariel Atkins supplied the offense, combining for 39 points as No. 12 Texas roared by No. 20 Oklahoma 86-68 in a key Big 12 game Tuesday night at the Erwin Center.

The Longhorns, leading 66-64 with 4:40 to play, outscored the Sooners 20-4 down the stretch. Brooke McCarty scored 16 points, Lashann Higgs came off the bench to score 15 and Kelsey Lang chipped in 11.

In the hotly contested game, Texas had a 30-17 scoring edge in the fourth quarter.

Coach Karen Aston lauded Taylor, who was removed from the game early in the third quarter with an undisclosed leg injury. She was particularly impressed by the senior forward’s early impact.

“At halftime I think Bre had one of the best stat lines I’d ever seen for someone who didn’t score a point,” Aston said. “Ten rebounds, four assists, two turnovers. And she forced (OU) into several turnovers too.”

Taylor, though, made contributions for Texas that many might overlook.

Coincidentally or not, OU’s run ended when Taylor returned.

“She goes after the ball like a hungry, hungry rebounder,” Coale said. “I’ve always said that great rebounders are the guys who go after every rebound.”

Taylor, meanwhile, said she was eager to return after watching the Sooners rally.

“Just seeing my team fighting and giving everything they have, that just fueled me (to come back),” she said. “We just feed off each other and I think this rivalry goes beyond everything that you know. It’s what we work for; it’s tradition.”

Atkins also commented on her teammate: “Bre is such a vital part of this team…. She’s been through a lot here and she’s accepted everything that coach has given her. She put her foot down and she’s there whenever we need her. She’s completely accepted her role … and I love Bre.”

As for the offense, no one played better than Atkins, who hit 9 of 13 shots from the field before fouling out with 1:08 to play.

In perhaps the biggest play of the game, Atkins hit an 18 footer from the left baseline as the 30-second shot clock expired with 3 minutes to play.

“Honestly I don’t know if they were clutch shots or big shots,” the junior from Duncanville said. “My teammates gave me the

ball and when the clock was running out, I knew I had to put it up. We went over that in practice not too long ago.”

Texas will hit the road for a Big 12 contest against Texas Tech at 6 p.m. Saturday.

Destination Texas, Part 5: Winning in ‘Siberia,’ knocking off the Longhorns for Tom Herman