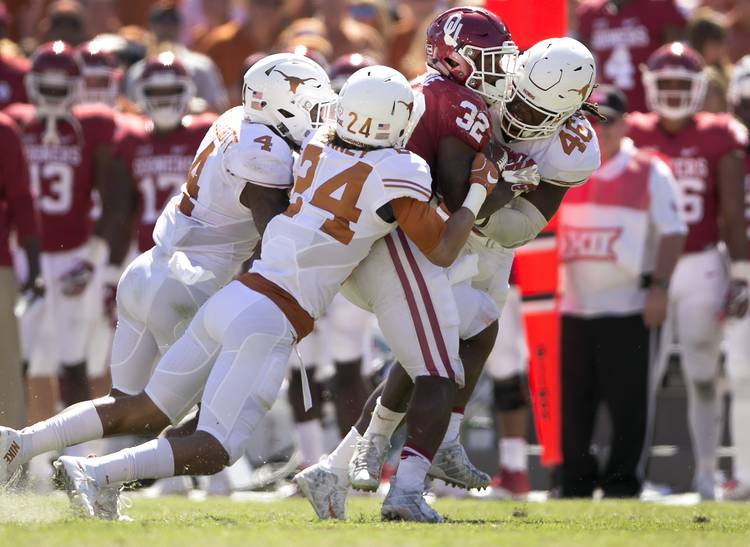 Following Monday’s deadline, there were 10 underclassmen from the Big 12 who had elected to enter the NFL Draft.

One of those names belonged to Texas running back D’Onta Foreman, who topped 2,000 rushing yards during his junior year. Texas fans will surely be sad to see Foreman go, but how happy will they be to watch those other nine players leave the conference?

How did those nine draft prospects perform in their collegiate careers against Texas? Here is the scouting report:

A junior, Cannon appeared in three games against Texas. Cannon recorded 10 catches and 120 receiving yards over those contests, and his only touchdown was a 15-yard score in 2016.

A redshirt junior, Gibson got to play against Texas in each of the past three seasons. Gibson, though, did not record his first catch in this series until West Virginia’s 24-20 win this past November. In that four-point decision, Gibson had four catches and 65 yards.

A junior, Lee logged 18 tackles and two sacks as Texas scored 44 points in its last three games against Kansas State. Lee was one of Kansas State’s leading tacklers in each of the last two meetings between these schools.

In three meetings with Texas, Mahomes threw for 848 yards, four touchdowns and two interceptions. Texas Tech’s junior quarterback completed 59.7 percent of his 119 passes against the Longhorn secondary, and he exceeded the 350-yard mark in two of those contests. Texas also sacked Mahomes on eight occasions.

A redshirt sophomore, Mixon carried the football 24 times for 72 yards during his two games against Texas. Mixon never scored against Texas, but he did catch six footballs. Mixon also lost two fumbles during the 2016 Red River Showdown.

A junior, Perine scored in all three of his games against Texas. Perine ran 63 times for 312 yards and four scores in the Red River Showdown, and he turned in a 214-yard, two-touchdown performance in 2016. Perine, who graduated from nearby Hendrickson High, exits college as Oklahoma’s all-time leading rusher.

A redshirt junior, Taylor made the most of his two appearances against Texas. In 2015, Taylor recorded three tackles and 1.5 sacks in a 30-27 win over the Longhorns. In 2016, Taylor tackled two Longhorns and blocked two extra-point attempts in a 49-31 triumph.

A redshirt junior, Walker played in only one game against Texas. He recorded just a tackle of Johnathan Gray in that 2015 appearance. Walker, who was sidelined for part of the season by a concussion, left the Sooners in November to prepare for the draft.

A redshirt sophomore, Zamora only logged statistics in one game against Texas. This past October, Zamora turned his four receptions into 45 yards and a 20-yard touchdown.

Judging by the statistics, it looks like Texas fans won’t miss seeing players like Perine, Mahomes and Taylor in 2017. If they blinked, however, they may have missed foes like Gibson, Walker and Zamora.