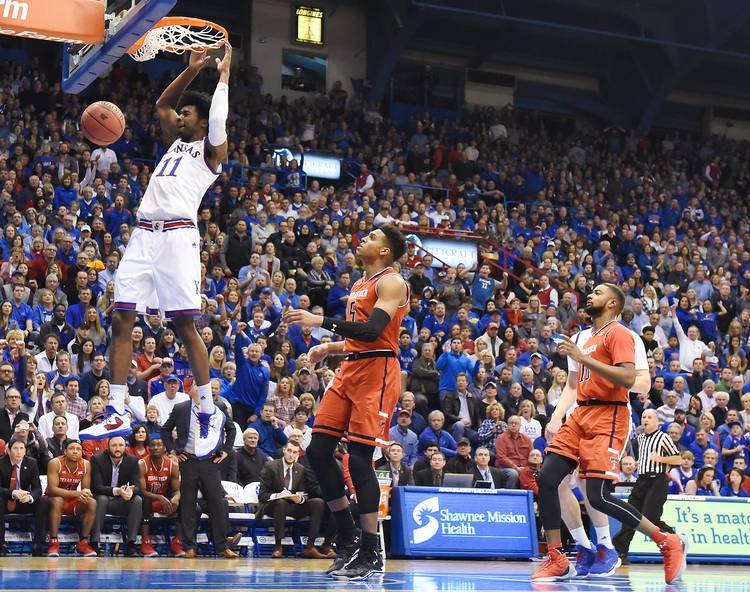 Kansas freshman Josh Jackson, who scored 17 points and had 10 rebounds, dunks during the first half against Texas Tech at Allen Fieldhouse in Lawrence, Kan., on Saturday, Jan. 7, 2017. Kansas won, 85-68. (Rich Sugg/Kansas City Star/TNS)

Josh Jackson may come to eventually appreciate his NBA-mandated, year-long internship at Kansas.

The Jayhawks’ 6-8 freshman who was labeled the nation’s No. 1 recruit in 2016 is learning that none of this comes easy. Coach Bill Self didn’t earn 12 consecutive Big 12 championships by coddling anybody. Senior Frank Mason III gets the same treatment as the kid who’s being projected as a top-five prospect in this summer’s NBA draft.

“He knows that I’m kind of a special player,” Jackson told the Kansas City Star, “and he still never takes it easy on me, doesn’t kiss my butt.”

Jarrett Allen’s freshman season at Texas has been a little more lowkey. The 6-11 forward has a paint-oriented role at Texas, whereas Jackson roams farther out. But he’s been just as dynamic for the Longhorns.

The Big 12’s two high-profile freshmen finally meet on Saturday at Allen Fieldhouse. Second-ranked Kansas (17-1, 6-0 Big 12) is gunning for its 13th straight league title while Texas (7-11, 1-5) scuffles along near the bottom of the standings.

CBS picked this game for a national broadcast for natural reasons. It matches two glamour Big 12 teams with two future NBA players. Self, his UT counterpart Shaka Smart and national player of the year candidate Frank Mason III give this two-hour drama a fascinating supporting cast.

But Jackson and Allen are the main attractions — two players every scouting service labeled as future stars. Recruiting rankings can sometimes be way off base, but in this case, both athletes have been spot-on matches for their five-star labels.

Jackson is projected as the fifth overall pick in the upcoming NBA draft, according to some scouting services. Allen was considered a mid-first rounder initially but has since been taken off some boards, giving the impression that scouts think he needs another year of seasoning.

Self noted Thursday that while UT senior Shaq Cleare was on a roll, “Jarrett is on a serious uptick.”

That same day, Smart said, “Josh Jackson is having an impact. He’s an exciting player and a tough matchup with his length.”

Jackson, technically listed as a guard despite his size, is averaging 15.1 points and 6.8 rebounds. He’s shooting 49 percent, averaging three assists per game and has 26 blocks. Allen’s slow start has hampered his overall numbers. He’s averaging 11.9 points for the season, but has scored 18, 19 and 17 points in the Horns’ last three games. Allen has double-digit rebounding totals in seven games along with 29 blocks.

The glaring difference? It’s their personalities.

Jackson already has three technical fouls this season. The first two were born out of sheer frustration; he slapped the ball away from a Duke player, and he slammed it to the ground against TCU. The third technical was for talking back to officials. Some will take guff off the older players, but not many freshman.

“These are guys who’ve called the Final Four,” Self said, according to the Kansas City Star. “They’re not going to take any crap from anybody.”

One nitpick about Allen is that he’s probably not forceful enough. A player of his size, stature and athleticism should be routinely calling for the ball and relishing one-on-one matchups. Allen glides to his left in wide, sweeping steps to get off a soft 6-8 foot jumper. He’s also done that same move and dumped the ball to Cleare, waiting on the opposite block, for a layup.

Prior to the Arkansas game in mid-December, coaches pushed Allen to start being more vocal. He seemed more animated that usual at Toyota Center.

“I think everybody needs to be more aggressive, especially me,” Allen said afterward. “It just came out. The coach says do whatever the team needs, and I just felt that’s what I needed to do tonight. I wouldn’t say I need to take over as a leader. I just need to find my role and excel in it.”

The soft-spoken big man likes video games and the engineering that goes into computers. Frankly, it startled his teammates when Allen spoke up during a timeout in a close game against Oklahoma State on Jan. 4. “Everybody was like, ‘Whoa, listen up,’” guard Kerwin Roach Jr. said.

None of them know E.F. Hutton, but when Allen spoke, they listened.

It’ll be interesting to see how Allen responds after watching Baylor’s Johnathan Motley get 32 points, 20 rebounds and shove him after a dunk in Tuesday’s loss in Waco.

Jackson was in foul trouble on Monday against Iowa State and had only six points in 27 minutes. The game prior against Oklahoma State, he had 20 points and 11 boards.

Self was his usual magnanimous self about the Longhorns in the late-week buildup. “They’re much better than their record, obviously,” he said. Texas is 1-14 all-time in Lawrence, and far better teams than this one have left with slumped shoulders.

The Horns will follow, if Allen can lead them through The Phog.