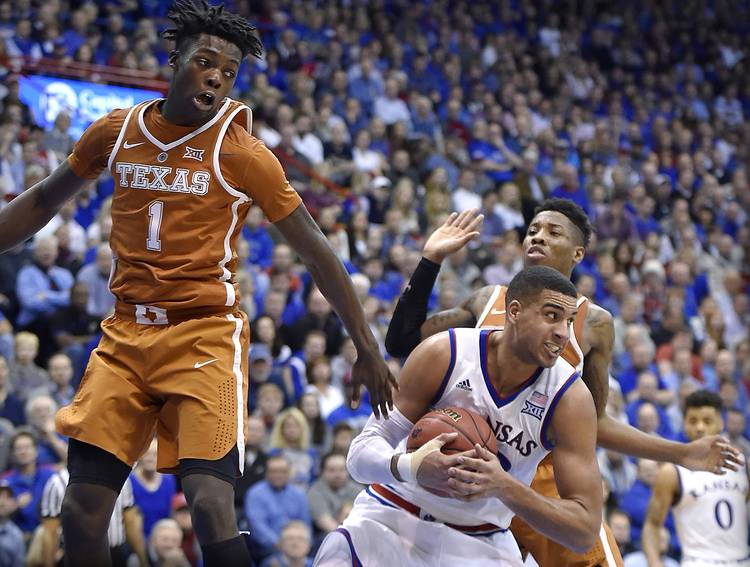 LAWRENCE, Kan. — There was a stretch in December when you really wondered if Texas freshman Jarrett Allen was worth the hype.

Six points against Michigan. Four points against Long Beach State. Eleven points against Arkansas. Sure, Allen flashed an athletic move here and there. He’d hit a smooth 15-footer or score on a swooping reverse layup. Hosannas were held back by inconsistency, though.

Here in the new year, something’s different. He scored 18, 19 and 17 in the three-game buildup to Saturday’s matinee with No. 2 Kansas and the nation’s No. 1 recruit from 2016, freshman Josh Jackson.

“I was really pumped up,” Allen said. “The whole team was pumped up.”

Allen was nothing short of spectacular. He registered season highs with 22 points and 19 rebounds, blocked three shots and overcame a twisted ankle to log 34 minutes. Unfortunately for Texas, it all came in a losing effort — a 79-67 decision as the Jayhawks won their 50th straight game at Allen Fieldhouse.

“That’s the Jarrett that I’ve been waiting to see,” freshman guard Andrew Jones said. “He’s just out there being aggressive. I see him making big numbers like that every game. We’ve just got to feed him the ball in the post.”

Kansas coach Bill Self, who tried hard to lure Allen to Lawrence, merely shrugged his shoulders and gave the 6-foot-11 forward his due.

“We had no answer for Jarrett Allen,” said Self, not that he really needed one. His Jayhawks were 17-point favorites. Devonte’ Graham and Frank Mason III drilled six of Kansas’ 11 3-pointers and combined for 35 points. Texas (7-12, 1-6 Big 12) never recovered from a 19-5 deficit in a disastrous start and trailed all day long.

“Oh, we’d love to have that back,” Cleare said. “I was a little upset, but I was able to move on, focus on the next thing.”

“The biggest thing was don’t give up, don’t quit,” guard Eric Davis Jr. said. “Something we’ve been working on is four-minute segments. Obviously they won the first four minutes. So one thing coach was harping on was, ‘OK, let’s win the next four minutes.’”

The rest of the day, Allen did exactly what he was known for at St. Stephen’s. He never made splashy “SportsCenter” plays. The nation’s 17th-best recruit just gobbled up loose balls. He scored from the left side and the right, and he drove down Broadway for a layup and foul that made it a six-point game with 11:05 remaining.

Allen fell and twisted his ankle after a layup with about 10 minutes left. He had to be helped off the floor but jogged to the locker room for taping. “I knew it was going to hurt,” he said, “but I knew it wasn’t anything that would stop me from playing.”

When the shouting from a sellout crowd of 16,300 finally stopped, Allen almost had the fifth 20-20 game in Texas history. It was the second-most rebounds by a freshman in school history. Allen fell three shy of tying the rebounding record set by a Kansas opponent in a conference game. Iowa State’s Chuck Duncan grabbed 22 boards against KU in 1995.

The only bugaboo was turnovers. Allen had six, including some that were self-inflicted when he didn’t catch the ball cleanly or let someone knock it loose in traffic. In total, UT had 19.

“I really think it’s the team connecting around everybody,” said Allen, who noted that the Horns have pulled even tighter with leading scorer Tevin Mack suspended for the time being. “I think I’m just being more aggressive. There’s a difference in playing hard and being aggressive. I think I’m starting to play more aggressive.”

How much was Allen motivated by the atmosphere? Was he energized by the matchup against Jackson? The latest Kansas phenom had 15 points, hit two 3-pointers and had five rebounds but wasn’t really the headliner. It was Allen.

“I think he was highly motivated, but you’ve got to give him credit in that he’s made major progress in terms of his consistency,” Smart said. “In terms of maximum effort on plays, he’s made great growth.

“The great thing is he still has tremendous room for more growth. I can’t say enough about his progress.”

Texas, wanting another wide receiver, has limited options for 2017 class