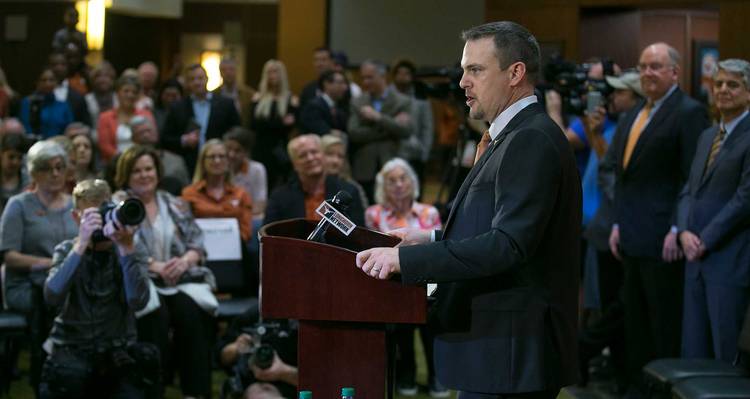 Texas wants a second wide receiver — Damion Miller is the only commitment in the 2017 class. Tom Herman is after a second, and maybe even a third, pledge before national signing day.

Texas took a hit when Lancaster speedster Omar Manning reaffirmed his commitment to TCU and Cedar Hill’s Charleston Rambo did the same to Oklahoma.

That leaves few options this late in the cycle. It’s one of the many challenges facing a newly hired head coach. Recruiting takes years. Herman’s staff had two months.

There are options, however. Here are four receivers with offers and a wildcard option the staff might consider:

Pouncey is expected to stay in-state, but that doesn’t mean Herman and his staff aren’t hard at work on his recruitment. Pouncey has been a target for Herman since his Houston days. He’s 6-2, 185, giving him a similar frame to targets like Manning and Rambo. He possesses plenty of big-play potential from out wide or in the slot.

Pouncey was visited by the Texas staff at his home on Tuesday. He’s taking his official visit to Austin this weekend. Florida and Miami remain the favorites, but anything can happen on an official visit.

Received an Offer From University of Texas 🙏🏾🙏🏾🙏🏾 pic.twitter.com/i8L69Yv1nH

The Longhorns failed to flip Miller’s teammate Grant Polley after a recent visit. Miller and Polley are both committed to Colorado, but their recent failure didn’t keep Herman’s staff from attempting a similar feat with Miller. He’s a speedy slot receiver ranked as the No. 86 player in the state.

Miller, at 5-11, is most likely an inside receiver at the college level. His top-end speed gives him the ability to beat defenses vertically, while his quickness in closed spaces makes him a tough player to handle in the open field. Texas has a shot if Miller sets up an official visit. Notre Dame is also in play for him.

Calvin has yet to visit Texas, but he indicated at the U.S. Army All-American Bowl earlier this month that the Longhorns were in line for an official visit before signing day. Calvin shocked the recruiting world by choosing Oregon State over Nebraska. In San Antonio, Calvin said he’d take his final official visit to Oregon, Baylor or Texas before signing.

I've decided to re-open my recruitment. Have to make sure I am making the best decision for my future. No interviews at the moment please.

Calvin is a slot receiver. At 5-9, though, he isn’t the same type of prospect as Manning or Rambo. Calvin will line up inside and Herman’s offense utilizes small receivers quite well. Calvin mentioned this fact a few weeks ago in an interview. If Calvin ends up visiting Texas before signing day, the Longhorns could be in position to secure a late commitment.

Blessed to receive an offer from the University of Texas👀 pic.twitter.com/xbG5D1c7jn

The Longhorns hope to land a wide receiver with height. This was made difficult when Manning and Rambo decided to remain committed and not give Texas serious consideration late in the cycle. Most of the available receivers are best suited to play slot. Texas needs an outside threat with height and length.

Enter Gardiner. The 6-5 prospect is committed to Missouri. His size is a mismatch for most defenders and he shows adequate hands as a pass-catcher. Gardiner is somewhat raw and doesn’t possess blazing speed. With an offer in hand, he becomes the most likely player on this list to commit to Texas.

Singleton might not get attention from the Longhorns, but he remains a name worth monitoring as signing day approaches. Herman’s showed the ability to recruit former commits and Singleton has been pledged to Houston since June. He’s clearly a player Herman saw fitting into his offense. It remains to be seen if Herman’s staff thinks Singleton can fit in at Texas.

An eventual offer might depend on what happens with players like Rambo, Calvin and Pouncey. Singleton can play outside, but might be best in the slot.